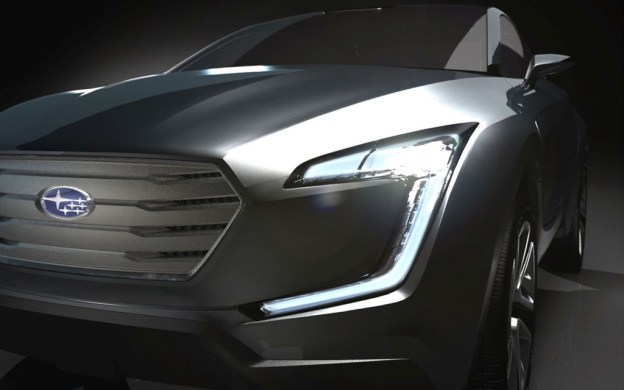 Word has come from Diseno-Art that Subaru has a new crossover vehicle ready to debut at this years’ Geneva Auto Show. What has the Subaru marketing team come up with for its latest creation? The VIZIV.

Yep, the VIZIV. It’s a neat name and a palindrome, which is rare for car names. Come to think of it, the “Palindrome” might have been a better name, all things considered. We digress.

Subaru has yet to divulged any info about the new crossover. But it’s clear it previews the latest Subaru design language. We rather like the running lights that run into the front bumper, which certainly distinguishes itself from the rest of the automotive LED running light trend. The headlight itself has been slit,  giving  the VIZIV a much more aggressive character. Also found up front is a trapezoidal grille. Although good looking, it’s derivative of pretty much every other automaker lately. Think of the Ford Fusion and the Toyota Avalon for immediate references.

Subaru recently did away with its SUV the B9 Tribeca. Could the VIZIV be a preview what might replace it? We think so. But for now, we can only speculate.

Under the hood, we wouldn’t be surprised to see a hybrid or plug-in hybrid set up on the VIZIV as plenty of automakers have premiered new hybrid crossover concepts this auto show season. Take the Nissan Resonance for example.

As soon as more is known about the interestingly named VIZIV, we’ll be sure to bring it to you. The Geneva Auto Show begins on March 5 and we hope to have more info on this stylish new concept before then.