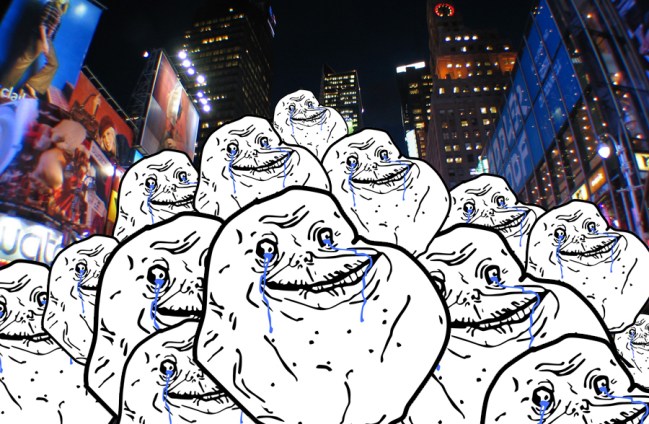 Guys of OkCupid.com, beware: The scalawags of 4chan.org and the r/4chan group of Reddit.com are on a mission to make you the laughing stock of the Internet.

According to a flier posted on Reddit on Tuesday, the pranksters plan to create fake online dating profiles using jacked Facebook pictures from “mildly cute” women, then convince “forever alone guys from NYC” that these fake ladies want to meet up.

All impostors must trick their targets into meeting at 7:30pm on Friday, May 13, outside the 47th Digital electronics store at the corner of 46th and Broadway in Times Square. To maximize the LULZ, this exact location is also broadcast 24/7 online via a surveillance camera at Earthcam.com (camera #2).

If all goes well (for 4chan), a massive group of “angry alone guys” will converge on this sad corner of Times Square to find that they’d been had by the Internet — and to form the world’s first “involuntary flashmob.”

To fight back against this cold-hearted hoax, a counter-caper has been proposed to lure equally lonely and unsuspecting women to the same corner, at the same time, to create the world’s first involuntary singles mixer.

The irony of planning such an antic on Reddit and 4chan — whose members aren’t exactly known for their ways with the opposite sex — hasn’t escaped much of anyone. That said, it’s safe to assume that the people who anonymously support this idea must at least believe that someone aside from themselves will come out looking foolish in this whole debacle.

Considering that various publications are now reporting the story, it seems as though the cat’s out of the bag. The plan is no longer a secret; therefore, there’s no one to fool — at least not as many as there would have been if we’d all kept our big mouths shut.

Here’s an idea: Since we highly doubt anything will come of this plan, as it requires a significant amount of time and a large number of heartless people to carry out, why not just have a regular, ol’ voluntary flashmob? Everyone can high-five, and go for a drink afterward. It’ll be a party instead of the saddest thing this side of a kitten who’s lost its momma. Who’s in?

P.S. If anyone happens to know any girls, be sure to bring them along.

Midyear progress report: Here are the best games of 2022 so far