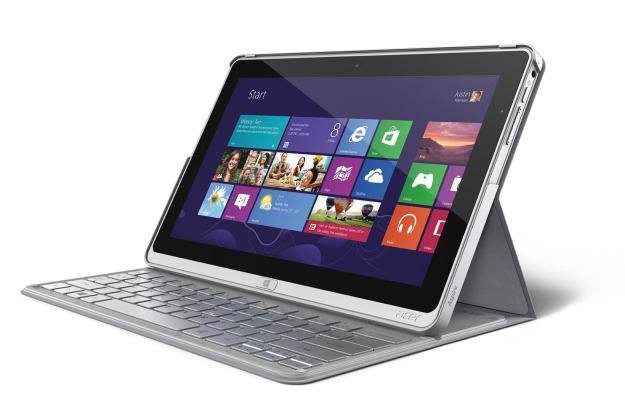 “Acer’s Aspire P3 is a nice-looking slate that ships with a keyboard cover. But at $900, it’s a hard sell, given similarly priced alternatives have better screens and battery life.”

The world of convertible laptops/tablets is growing every day. As we saw back in May at its global press event, Acer has its own version to throw in the mix: the Aspire P3. Our initial impression was that Acer made an Ultrabook trapped in a tablet’s body. It also reminded us a little of the Surface Pro.

Acer bills the 11-inch Aspire P3, as a Windows 8 Ultrabook. And at a bit over a half an inch thick and 3 pounds light with its included Bluetooth keyboard cover, the P3 easily slides under Intel’s Ultrabook requirements.

A nice-looking slate that ships with a keyboard cover (unlike the Surface), the Aspire P3 (like the Surface) starts at $900. At that price, it’s a hard sell given that similarly priced alternatives have better screens and battery life.

Popping the screen out of its keyboard cradle, the P3 becomes a 1.74-pound tablet and bears a striking resemblance to the company’s higher-end Iconia Tab W700, a hybrid device that we were pleasantly surprised by, considering its affordable price of $750.

The W700 impressed with its long battery life and 1080p screen, so what does the Aspire P3 have to offer that it’s cousin doesn’t have?

A nice tablet, if you can detach it

When popped out of the keyboard cover, the Aspire P3 is a rather nice, if simple-looking Windows 8 slate. Its back and sides are crafted of a single silver piece of aluminum, with a strip of white plastic near the top to aid Wi-Fi reception and make room for the 5-megapixel rear-facing camera.

At 0.4 inches thick, the tablet feels nice in our hands, and considering it packs a low-voltage Core i5-3339Y processor, 4GB of RAM, and a 120GB solid-state drive inside, it isn’t too heavy at 1.74 pounds.

The problem is, switching the P3 from Ultrabook to tablet isn’t easy. The silver plastic frame that holds the tablet in place for typing hugs the slate so tightly that it takes two hands and some serious effort to pop the tablet out. You actually have to bend the plastic frame of the cover backwards to remove the tablet. And the power button and volume rocker sits on the right-hand edge – right where you instinctually want to place your thumb when trying to remove it.

Once you get the hang of it, taking the tablet out from its keyboard case isn’t too much of a hassle, but it always feels cumbersome, especially if the P3 isn’t sitting on a desk when you do so. At least putting the tablet back into the keyboard case is easier: You just drop the tablet into the bottom of the frame and it pops in easily at the top with some pressure from your thumbs.

Port selection on the P3 is sparse, but the basics are mostly covered. The layout, though, could use some improvement. Walking around the tablet’s edges, starting on the right, there’s a headphone jack up top, followed by a power button and volume rocker.

Once you get the hang of it, taking the tablet out from its keyboard case isn’t too much of a hassle, but it always feels cumbersome…

On the bottom are a pair of Dolby-enhanced stereo speakers that sound okay for a tablet, but don’t get overly loud.

On the left-hand side lives a Micro HDMI port, the sole USB 3.0 port, and the power connector. The placement of the power jack is kind of a pain, as it’s more than halfway up the side of the tablet. So when it’s plugged in and you’re using the P3 in laptop mode, the power cable hangs in the air off the side of the screen. We’d much rather see the power port near the bottom as we’re used to seeing with traditional laptops.

On the top sits a pair of exhaust vents that moves heat with the aid of an internal fan. In our testing, the fan produced some noise when the laptop was under heavy load, but it was only noticeable in a quiet room. When running graphics and CPU-heavy tests, though, the right vent in particular pushed out a fair amount of heat.

An IPS panel with some sacrifices

We praised the Iconia Tab W700’s screen for its 1080p resolution and excellent contrast. The IPS screen in the P3 keeps the great contrast levels, but drops the resolution down to a mediocre 1366 x 768. The lower resolution will make working on spreadsheets easier on the eyes than a 1080p screen, but you lose some screen real estate of course.

Also, oddly, Acer has the scaling settings on the P3 set to 125 percent out of the box. That led some of the windows of our benchmarks to render larger than the screen. This will likely cause frustration and confusion with mainstream users, but it can be fixed by delving into the system’s settings.

What can’t be fixed is the screen’s brightness, which, in our testing, maxed out at a bit more than half the brightness of the Iconia Tab W700’s screen. Viewing angles aren’t an issue, though. As long as you don’t mind the lower resolution, and stay out of direct sunlight, the P3’s screen looks pretty good.

A keyboard case does not a laptop make

As we’ve said, the P3 ships with a Bluetooth keyboard case. Its black leather-like exterior looks nice enough. And with the tablet strapped in, the P3 works reasonably well as a laptop-like device. But you’ll need to be at a desk to use it as a laptop because the bottom of the screen just sits unsecured in a groove behind the keys, which means it can fall out if you try to, say, type in your lap. And there’s also only one screen angle, which may pose a problem if you’re trying to type in cramped quarters (like on a plane), or if overhead lights cause reflection issues with the screen.

The Iconia Tab W700, the Surface Pro, and the P3 all share the same problems that come with their similar convertible designs…

As for the keys themselves, most are reasonably sized for an 11-inch laptop, but travel is pretty shallow. Some keys, like Insert and Print screen, don’t get dedicated buttons – you’ll have to enable them through a Function key combo. Also, the Caps Lock key is tiny, and squished oddly alongside the full-sized accent mark/tilde key on the left edge between the Tab and Shift keys.

Bottom line: This keyboard will take some getting used to, and you’ll probably never get to the kind of typing speed your fingers are capable of on a good laptop or desktop keyboard.

There’s also no touchpad here, so you’ll have to rely on tapping the screen, or bring your own mouse –preferably of the Bluetooth variety, given the P3’s single USB port.

We received a pre-production unit from Acer, but the company assured us the performance was neck and neck with the final-production models. We have no reason to believe what you buy on the shelf is different from what we tested.

Given its ultra-low-voltage Intel 3rd-generation dual-core Y series Core i5 CPU, the P3 performed reasonably well in our benchmarks, aided by its 120GB SSD and 4GB of RAM. It’s certainly no powerhouse, lagging a bit behind most of the Ultrabooks and mid-range laptops we’ve seen lately. But it’s much more capable than Atom-based tablets like HP’s Envy x2 when it comes to tasks like Photoshop.

Graphics performance was a bit less than what we saw with the Surface Pro, but, again, much more capable than an Atom-based slate.

Battery life, though, isn’t great. The P3 lasted 2 hours and 13 minutes in our taxing Battery Eater test, and 5 hours and 19 minutes on the lighter Reader battery drain test. That’s roughly in line with Acer’s Aspire R7, but much shorter than the longevity we saw with the similarly priced Iconia Tab W700, which lasted well over 8 hours on the latter test.

Given the Iconia Tab’s similar design, slightly better components, better and brighter screen, and much longer battery life, it’s hard to argue for the lesser P3, given the two tablets’ prices are so similar, at least as of this writing.

At $900, the Aspire P3 is also in the same price territory as Microsoft’s Surface Pro, which also has better components and a 1080p screen, though you’ll have to pay extra for the keyboard cover.

Really, though, the Iconia Tab W700, the Surface Pro, and the P3 all share the same problems that come with their similar convertible designs. As tablets, they’re powerful but heavy. And, the W700 aside, battery life is usually relatively short.

Those looking for a laptop-like experience with their convertible tablets are better off opting instead for a clamshell convertible like the Envy x2 or Samsung’s ATIV Smart PC 700T. Those devices offer much better typing experiences, adjustable screen angles, and more stability if you need to, say, type in your lap.

Thanks to secondary batteries in their base, clamshell convertibles usually offer more ports and longer battery life. Their extra ports and battery means they weigh more, though. So if you need to travel very light and don’t need to do all that much typing, a design like the Acer Aspire P3 might be right for you. We just hope Acer drops the price to make it better fit with competing devices.