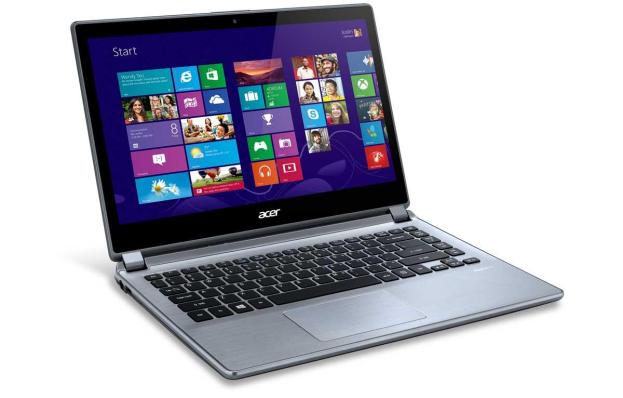 Check out our review of Acer Aspire V7 laptop.

Now that Intel’s Haswell cat is out of the bag, manufacturers are announcing many of their new notebook lines this week at the Computex conference in Taipai, Taiwan. Having already announced Haswell updates to its S7 and S3 line of Ultrabooks earlier today, Acer is continuing with the updates, announcing details about its Aspire V7 Ultrabook and all new gaming notebook, the Aspire V3. Both laptops rock the fourth generation of Intel’s Core i7 processor and offer discrete graphics, which is especially impressive for the V7 Ultrabook.

Based on the specs, the Aspire V7-482PG-9884 is shaping up to be a powerhouse of an Ultrabook. In addition to an Intel Haswell Core i7-4500U processor, it has a discrete Nvidia GeForce GT750M graphics card with 4GB of video memory plus 12GB of RAM and a 1TB hard drive. There’s no solid-state drive, at least in this initial configuration, but other versions of the Aspire V7 will offer an SSD option.

The Aspire V7 is fairly similar looking to the Aspire V5 that the company showed at its May event in New York City, but the V7 features a 14-inch ten-finger touch IPS 1920 x 1080 HD display. All of this is packed into a 13.39-inch x 9.45-inch x 0.9-inch (at thickest point) package that weighs 4.41 pounds. While it’s not the lightest Ultrabook we’ve seen, the Aspire V7 certainly packs a lot of tantalizing specs into its Cool Steel chassis. The V7 will start at $1,300.

Looking for a notebook with more gaming prowess? Acer’s got you covered there, too, with its new 17-inch gaming rig, the Aspire V3-772G. While the base configuration starts at $1,000, we think the model available for $100 more, the Aspire V3-772G-9402 will be more interesting to gamers and multimedia fan. It features a quad-core, Haswell generation, Intel Core i7-4702MQ 2.2GHz processor that can clock up to 3.20GHz with TurboBoost. It’s paired with an Nvidia GTX 760M discrete graphics card with 2GB of video memory, plus there’s a 500GB hard drive and 8GB of RAM. A fully loaded configuration of the Aspire V3 will hold up to 12GB of RAM and a 1TB hard drive.

The 17.3-inch 1920 x 1080 full HD LED backlit display has a brightness of 300 nits. While it’s not available as a touchscreen, the Aspire V3 does include a SuperMulti DVD player and plenty of ports including HDMI, two USB 3.0 ports, two USB 2.0 ports, and VGA. There’s also Bluetooth 4.0 for connecting a wireless keyboard or mouse.

Gaming notebooks have never been synonymous with “lightweight,” and the V3 is no exception. Its 16.33-inch by 10.83-inch by 1.36-inch (at thickest point) frame weighs in at 7.05 pounds. While  it’s not as light as an Ultrabook, we’ve still seen plenty of gaming laptops that weigh much more.