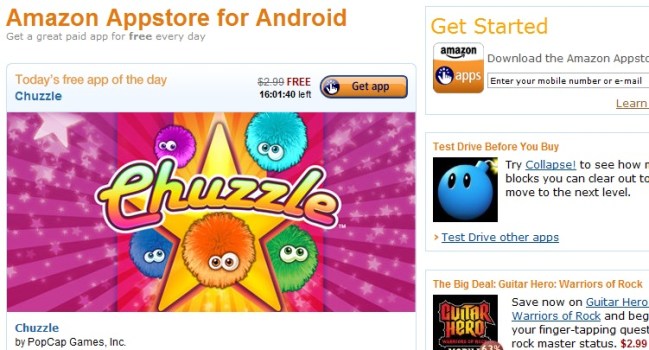 The spat between Amazon and Apple continues over Amazon’s use of the term “app store.” It all started in March when Amazon launched its Android marketplace – called Appstore for Android. The Cupertino-based company didn’t take too kindly to that, claiming trademark infringement over the name “Appstore.”

In March, Apple filed a lawsuit seeking to have a judge prevent Amazon from using the “Appstore” name. It also asked for compensation for unspecified damages.

Then in April, Amazon’s lawyers responded by rejecting the idea that the name of its store was infringing on the trademark of Apple’s App Store. Amazon said that “app store” is a generic term and that it doesn’t need to get permission from Apple for its use, as such a phrase is “unprotectable.”

Amazon said it’s a generic term, and that even Apple itself used it in that way, citing Apple CEO Steve Jobs in October 2010 when he said that Apple’s app store is “the easiest-to-use, largest app store in the world, preloaded on every iPhone.”

On Thursday, in papers filed in a Californian federal court, Apple denied Amazon’s claim that app store is a generic term. “Apple denies that the mark APP STORE is generic and, on that basis, denies that the Amazon Appstore for Android service is an ‘app store,’” the company said. “Apple further denies that defendants have the right to use APP STORE as a trademark in connection with Amazon’s mobile software download service for Android devices.”

In the filing, Apple said that it admitted that “the current edition of the Oxford English Dictionary defines ‘app’ as, in part, ‘[a]n application, esp. an application program,” and that it “further admits that the current edition of the New Oxford American Dictionary defines ‘store’ as, in part, ‘a retail establishment selling items to the public: a health-food store.’”

The filing goes on to say: “Apple denies that, based on their common meaning, the words ‘app store’ together denote a store for apps.” It also states that it doesn’t believe “the words ‘app store’ are commonly used among many businesses to describe mobile software download services and further denies that the term ‘app store market’ is used to describe the market for mobile software download services.”

It’s going to be interesting to see which way this one goes. Will Apple win the day and force Amazon to change the name of its app store – or will any ruling go Amazon’s way, allowing it to continue with a name that the company feels it has every right to use?

Topics
Here’s why Apple’s VR headset may become an ‘expensive flop’
If you think PCs are dying, you haven’t been paying attention
Best laptop deals: Save on Apple, Dell, HP and Lenovo
Microsoft Word vs. Google Docs
The best PC power supply for 2023
ChatGPT has a new way to detect its own plagiarism
Samsung Galaxy Book 3 Ultra vs. MacBook Pro 16-inch
The Galaxy Book 3 Ultra is Samsung’s most powerful laptop ever
Nvidia may have another monster GPU in the works, and the price could be outrageous
AMD’s Ryzen 9 7950X3D pricing keeps the pressure on Intel
What is ChatGPT Plus? Everything we know about the premium tier
ChatGPT Plus to bring priority access during peak times — at a hefty price
Usually $3,879, this Lenovo laptop is down to $1,479 today