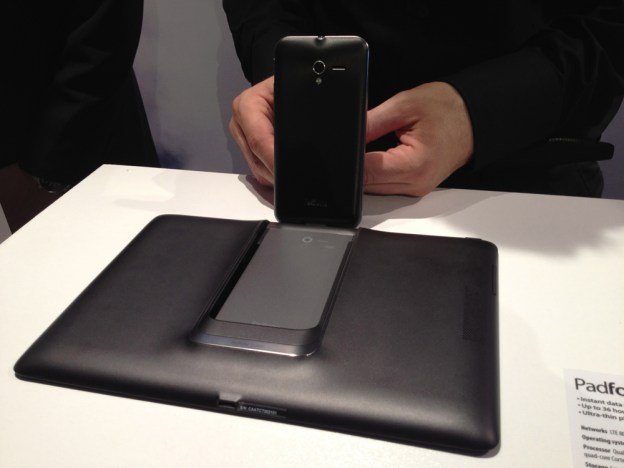 The latest burgeoning relationship in tech-land is between Asus and Microsoft, with the former reportedly keen to start building Windows Phone 8 devices. The news comes from the Wall Street Journal, where Asus’ VP of Mobile Communication Products, Benson Lin, said the firm was interested in pairing Microsoft’s mobile operating system with its unusual PadFone device.

Late last year, Asus launched the PadFone 2, a considerably more polished and user-friendly device than the first PadFone. Lin is quoted as saying, “I think it makes sense for Windows 8,” and although we agree with him in principle, the execution may prove to be problematic. You see, the PadFone 2 uses regular Google Android on the phone section, then Asus subtly tweaks it to make it more suited to the big screen when it’s docked with the tablet. Microsoft doesn’t allow third party user interfaces over Windows Phone, so it would probably only display an enlarged version of the phone’s OS.

Windows Phone 8 supports a high enough resolution to get by on a tablet, but the vertical scrolling Start screen, optimized for use with your thumb, simply wouldn’t work on anything but a phone. Another big advantage of the PadFone is the seamless transition of whatever you’re doing when you dock the phone with the tablet, something which would be lost if Asus decided to go with Windows Phone 8 on the phone and Windows RT on the tablet, for example. It’ll be interesting to see what the brains at Asus come up with regarding this conundrum.

Whatever it does, it looks like we’re some time way from finding out Asus’ plans, as Lin told the WSJ it had, “no target timeline, but we are interested in making Windows Phones.” We shouldn’t expect anything related to Microsoft’s mobile OS at Mobile World Congress, then, despite already being told the show will be “Huge” for the company.