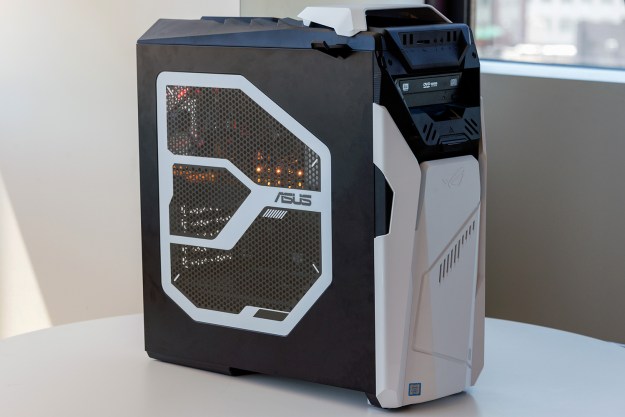 The newly introduced Asus ROG Strix GD30CI brings something a little different to the gaming PC scene – or at least it’s trying to. With an Intel Core i7-7700, 32GB of RAM, and a reference GTX 1080, the Strix hits a lot of the right notes – on paper, at least.

The Republic of Gamers line of computers and components from Asus has long stood at the forefront of the PC gaming market, often numbering among the best gaming PCs. The products defined the red and black gamer aesthetic that’s become ubiquitous, although recently ROG has tried to stray from that cliche. The Strix line embodies that change, with GPU shrouds and motherboards that are dark, matte gray, a toned-down look from the bombastic early days of the ROG brand.

But producing solid internal components doesn’t always translate into building systems. The Strix GL553VD laptop suffered from heat issues, and while its design was certainly attractive, its durability didn’t hold up to scrutiny. We’ve now had a chance to spend time with a Strix desktop, the GD30CI, and it’s much the same story.

Who built this thing?

A lot of the GD30CI feels like Asus finding ways to check off boxes on the gaming-desktop feature list. Everyone wants RGB LEDs, right? Slap five tiny lights near the stock CPU cooler and call it done. Advanced cooling? A single 120mm fan with a bright red LED will do. People like case windows? Thrown in a bit of transparent plastic and then, for a bonus, add some metal that claims to protect from electromagnetic interference. Job done.

Under the jaunty white plastic coverings, which are easy enough to pry off that Asus advertises removing them as a “customization option,” lies the one interesting piece of the GD30CI. Several crossing black straps of plastic meant to look like a futuristic fabric weave diagonally across the chassis. It’s a unique, original look, but not without its problems. The front façade must be removed to see this, and holes it clips into mar the front of the case when the façade is removed.

There’s no accounting for taste, but the GD30CI’s design doesn’t scream premium or sleek, and those are key words in the PC building community nowadays. Tempered glass and RGB fans with several zones are in, even at price points well under $2,000. The Strix desktop just feels like leftovers from the ROG cutting floor.

Despite the custom motherboard, there’s an average selection of connection options for a gaming desktop.

Unlike custom built systems, where choice of motherboard and GPU will determine connectivity, the Asus has one set of connections regardless of configuration. It sports two USB 2.0, four USB 3.1 Type-A, a 3.1 Type-C port, Ethernet, and 6-port audio. Despite the custom motherboard, that’s an average selection of connection options for a gaming desktop.

Video connections will vary based on graphics card, but most options are going to include three DisplayPort, one HDMI, and a DVI-D. That was the case with our review unit, which contained a GTX 1080. There are GTX 1050 and 1060 options as well, and those may have less ports than the high-end option.

As with any gaming desktop, performance varies greatly depending on configuration. Our Asus ROG Strix GD30CI review unit was outfitted with an Intel Core i7-7700, a quad-core chip with Hyper-Threading, a 3.6GHz base clock, and a 4.2GHz boost block, paired up with 32GB of RAM. We’re more used to seeing the Core i7-7700K in gaming rigs. Not only is it faster, at 4.2GHz base and 4.5GHz boost, but it also allows the user to overclock the chip, pushing its clock speeds higher, typically with the help of a third-party CPU cooler.

The extra RAM is a nice touch, and its 3,000MHz clock speed is higher than most, but 32GB is more than our benchmarks can easily take advantage of in a meaningful way.

The biggest pains for the Asus came from the fact the Intel Core i7-7700K has become the standard among other system builders, and the overclocking process is well refined, as seen by the monstrous 5.1GHz overclock on the Origin Neuron. Without the unlocked chip, the Asus fell behind in raw CPU tests.

Its stock cooler didn’t do it any favors, as it hit the thermal threshold set by Asus out of the box – 77 Celsius — shortly into our Handbrake 4K conversion. With third-party coolers and closed-loop liquid options so common, the Asus’ already paltry thermal solutions had actual performance consequences.

At least Asus had the good sense to include decent storage options. Our review unit was outfitted with a 256GB SATA SSD. That’s an increasingly common setup, even at the price point, although occasionally PCIe drives show up in the highest-end systems.

The SSD is a fine option for most users, that still falls short of the high-end PCIe options sneaking into its neighbors. Our review unit also includes an unbranded 1TB data drive, which should give users some room to grow, while still keeping an operating system and game drive ready to roll.

There are a variety of GPU options, starting at the GTX 1060, but our review unit was packing an Asus reference model GTX 1080 with a single blower fan. It’s not exactly a luxurious card, and it isn’t overclocked as far as we can tell, but at least it won’t be blowing a lot of hot air into the case.

While these results may look terrible for the Strix, the system Asus sent us is less powerful, and less expensive, than most of the others we’ve recently tested. That should be kept in mind when considering the performance results.

The Strix produces playable frame rates in all our titles at 1440p, and only Deus Ex: Mankind Divided drops the average below 60 FPS. Performance will vary greatly depending on configuration, and above $1,500 or so, users have their pick of high-end cards.

The GTX 1080 is a nice compromise, with solid performance that doesn’t break the bank. It also shows that we’re already well over the point where most users need to spend for optimal performance. The GTX 1080 can power smooth 1440p, or extra smooth 1080p gaming. That said, performance isn’t everything, particularly when anyone can use the same parts.

Asus offers a variety of warranties on its gaming desktops; our review unit had only the one-year option. That’s limited for the category and the price point, and falls a lot closer to regular, (and less expensive) consumer desktops. It also won’t cover the parts if you break them during maintenance or cleaning, and Asus encourages you not to even open the case by putting a sticker across the back of it. That alone is a huge limitation — and unfortunately similar to ones we’ve seen from Acer and other system builders.

At our Asus ROG Strix GD30CI review unit’s $1,900 price point, we expect a nice rig. Instead, it feels like Asus has made the same mistakes first-time home system builders make. There isn’t enough cooling, even for the locked-down Core i7-7700, the case is gaudy, and there’s more RAM than most users will need while skimping elsewhere. The GTX 1080 in our review unit was a redeeming quality, but wasn’t overclocked, and came out slower than other systems with the same GPU.

There are many. Performance is going to depend mostly on the CPU and GPU the user chooses, but those choices are limited in the Strix. The space is filled with offerings from every company from the Alienware Aurora to the Acer Predator G6. The Asus is reasonable priced, but not affordable enough for a system you can’t open without voiding the warranty, which only has one fan.

Meanwhile, the iBuyPower Chimera is available at publish in a name-brand case with a full tempered glass side panel, liquid-cooled Intel Core i7-7700K, a 2TB data drive, a GTX 1080, and a 144Hz curved 1080p panel, for almost exactly the same price. It’s worth spending more on a nicer system, or spending less and getting a good deal.

Like most mid-to-high end gaming PCs, the Strix should last several years without need for upgrades. That said, it’s important to open and clean systems, and the Strix’s limiting warranty discourages that. With just one exhaust fan, and no dust filters, it’s likely the system will grow dirty sooner than later.

No. Performance isn’t everything, particularly when it comes to gaming computers, which all operate on a basically level playing field for CPU and GPU. The pre-built Asus Strix GD30CI has too little cooling and no overclocking. That caused the system to fall behind others with the same components.

Gaming desktops are a dime a dozen, and any number of them are a better choice than the GD30CI. Cheaper systems offer aggressive pricing with more attractive off-the-shelf enclosures. Slightly more expensive systems include premium features, and encourage overclocking and regular maintenance. The Asus falls somewhere in between, and falls through the cracks.