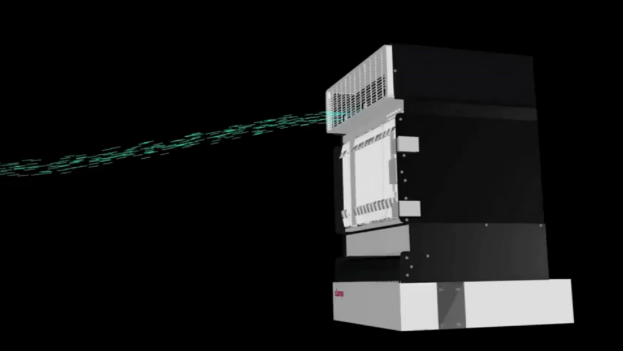 At the Seattle SuperComputing 2011 conference, a team lead by the California Institute of Technology (Caltech) set a new 186 gigabits per second record for computer-to-computer network data transfer—opening a window into our web surfing future, and spitting in the collective eye of current internet service providers.

The international team consisted of high-energy physicists, network engineers and computer scientists from Caltech as well as the University of Victoria, the European Center for Nuclear Research (CERN), University of Michigan, Florida International University and a few other partners.

The 186 Gbps speed beats out the 2009 record of 119 Gbps. The team’s record speed is fast enough to transfer two million gigabytes per day, or roughly 100,000 full, commentary and extras-packed Blu-ray disks in a day.

The speed was achieved with a 100 Gbps circuit, set up by the non-profit BCNET and CANARIE. The combined 186 data rate was sustained between the University of Victoria’s data center in British Columbia and and the Seattle Convention Centre at a top rate of 98 Gbps, and a simultaneous 88 Gbps in the other direction. A larger demonstration was also made, transferring from Seattle to various parts of the US, as well as to partners in Korea and Brazil. ExtremeTech points out that achievement is quite significant since the scientists used a commercially available 100 Gbps link rather than transferring “over private networks under laboratory/testbed conditions”.

We consumers may not need that many Blu-ray disks in a day, but for physicists, this speed could mean important things like understanding space, time and matter better. Small groups and individual physicists could be able to partake of the 100 petabytes (and counting) of data coming from CERN’s Large Hadron Collider more efficiently.

“Having these tools in our hands allows us to engage in realizable visions others do not have. We can see a clear path to a future others cannot yet imagine with any confidence,” said physics professor and high-energy physics team (HEP) head, Harvey Newman.

Comcast tests 4Gbps speeds that could ramp up your internet