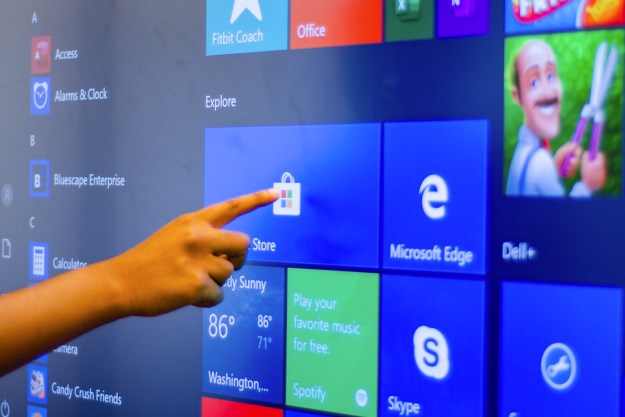 Dell is known for its monitors and laptops. We’ve seen super-thin USB–C monitors, a massive 55 inch OLED gaming display, as well as revolutionary laptops like the ultra-thin XPS 13. But with the recent announcement of Microsoft’s Surface Hub 2S, Dell has also been exploring and looking to innovate the collaboration space — changing the way you interact with coworkers during office meetings.

Enter the Dell 75 4K Interactive Touch Monitor. At $6,000, it is an expensive display that’s probably not for your home — but it will definitely make for a good replacement to that boring whiteboard in your office. Even better? It could even change the way you run meetings.

Get together to look at this beautiful display

As soon as I entered the room with the Dell 75 4K Interactive Touch Monitor, the first thing I noticed is the size. Compared to the slim 55-inch Surface Hub 2S, it is huge and just slightly bulkier along its metallic looking sides. That’s not a bad thing, as the massive 75-inch 4K panel on the front pulled me right in. For such a large screen, I’ve never seen Windows 10 elements like Start Menu look so beautiful and crisp before. In all its glory, the display was almost begging for me to play with it.

The key feature on the Dell 75 4K Interactive Touch Monitor is its 16:9 aspect ratio IPS panel with a 60 Hz refresh rate and 3 ms response time. That’s the same type of panel as the Surface Hub 2S, which we already loved. And so, I went to YouTube and pulled up a 4K collection trailer for Avengers 4, Endgame. I was wowed.

Sitting across the room from the display, it felt like being in a theater. I could make out the finest details showing on the screen, down to the text on a soda can. Like gaming laptops, the IPS panel creates great image quality, regardless of what angle you’re viewing from. Considering this display will be used in large bright conference rooms, that’s important.

Leave your markers at home

But there’s more to the Dell 75 4K Interactive Touch Monitor than just its 4K resolution. Dell tells me that the Dell 75 4K Interactive Touch Monitor also features some technologies built specifically for the collaboration space. While not unique to Dell’s touch monitors, one of those is support for 20 points of touch via fingers, or a stylus. In non-technical terms means that multiple people can ink on the display at the same time.

My photographer and I scribbled on the display simultaneously — him with the pen and me with my fingers.

To try it out my both my photographer and I scribbled on the display simultaneously — him with the pen and me with my fingers. It’s something I’ve seen on the Surface Hub before, but I was still amazed. Just like a whiteboard in a conference room, we also could each erase ink with just our palms, without having to click a button on screen.

Two passive styluses are included with the price of the monitor, but up to four can also be used. The stylus is just a curved chunk of plastic with a 2mm precision tip. While the black and bulky aesthetics is not as fancy as the silver Surface Hub 2 Pen, it does not use batteries, and there isn’t anywhere to dock it to the display. Still, that just means anyone can grab one from a desk and right away get inking on the display without having to worry about charging.

Dell also aimed to simulate the pen to paper with the experience of inking on the monitor, and it felt exactly like that. When dragging my fingers and the pen across the screen, the tiniest bit of resistance held the pen back, like a pencil hitting the pages of a notebook. There’s no lag whatsoever.

How do you go about doing all this collaboration? Well, Dell includes support for industry-standard collaboration software. In particular, Dell includes FlatFrog with the display, a piece of software that lets you import images and ink around them. That is something that can be very useful for showcasing and marking up important files during meetings. No more magnets and sticky notes needed to get your important items on the company whiteboard. Simply pull it up digitally, and keep it on the large 75-inch screen.

Dell aimed to simulate the pen to paper with the experience of inking on the monitor, and it felt exactly like that.

For ease of access, you can also quickly tile and arrange the items on the display with an Easy Arrange feature with the Dell Display Manager software. I tried it out, and it was nice to have the software automatically tile four open windows in squares, showing all my web browsing sessions.

The last collaboration experience I tried was the most unique. Pushing a button on the side of the screen will pull it down to a height of 100, 66, 50, or 33 percent. It’s similar to “reachability” on the iPhone. Dell calls it “Screen Drop,” and it’s intended to improve reachability and accessibility during meetings. It’s strange to see it in action as the top of the display gets dark as image on screen moves down, but I can see it being great for people of shorter heights, who can’t actually reach all the way to the top of the display to ink or touch it.

There is also another touch button running along the bottom of the screen to bring up a menu to control the display options. Like what we experienced with the Dell 27 USB-C display, it’s clean and efficient. Menus are easy to understand and are clearly labeled. You even can navigate with touch.

One of the greatest strengths of Microsoft’s Surface Hub 2S is having all the computing power and Windows 10 integrated right inside a unit built into the display. An all-in-one solution, it is ultra-portable and you won’t need to worry about having to plug in a laptop or desktop to enjoy collaboration experiences. To my disappointment, that is the same area where the Dell 75 4K Interactive Touch Monitor falls a bit short.

Yes, Dell did build a slot for an OptiPlex Micro PC right into the monitor, but it is not included with the price. It’s cool to see that the compact PCs could slots into the side, but to fully enjoy the collaboration and inking experiences you’ll still need to hook up your own PC and stay connected to power. There’s no battery backup or true portability like with the Surface Hub 2S.

There’s a ton of ports on the display that make up for that, but I didn’t see any place on the display where I could “house” an external laptop. Port selection includes 3 HDMI ports, 1 DisplayPort, 1 VGA port, 4 USB ports, 1 Audio in and Out Port, 1 RS232 Port, and 1 RJ-45 Jack. Instead, a laptop will have to sit at the side of the display, or on a table during collaboration. There’s a lot of questions, and we also weren’t certain if these touch features will still work with MacOS, or if a Chromebook is connected.

Get it for your office now, but with big cost

The Dell 75 4K Interactive Touch Monitor has a lot of cool inking and collaboration features that can replace the standard whiteboard in your office, but it also has competition. Not only is the Microsoft Surface Hub 2S an option, but there’s also the Google Jamboard. Priced at $1,462, and $4,098, you can also find cheaper large format touch displays from Samsung, and ViewSonic, While these are not as robustly designed to integrate with Windows and don’t include as many ports, this shows the Dell 75 4K Interactive Touch Monitor definitely isn’t the first of its kind.

Mounts and stands are also not included in the $6,000 price of the Dell 75 4K Interactive Touch Monitor, so there’s a lot of added cost involved. The monitor I checked out was mounted in its own custom travel case, but Dell does sell a separate wall mount for $130. Exact specs aren’t listed for the wall mount, but Dell tells us that the monitor is also VESA 400X400 compatible. An “X-Large Fusion” adjustable stand which can adjust the monitor between 56-74 inches, meanwhile, comes in at an additional $1,500.

The Dell 75 4K Interactive Touch Monitor is available now through Dell, and there are smaller 54-inch, 69-inch, and even a larger 85-inch sizes as well.