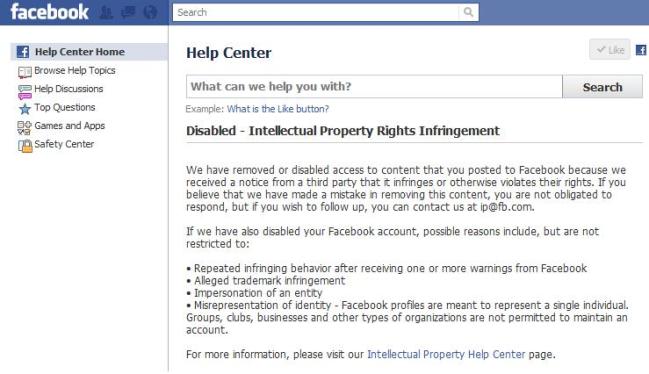 Facebook’s protocol for handling copyright infringement is being criticized after many tech blogs have had their Facebook pages abruptly taken down. Ars Technica, RedmondPie and Neowin are some of the sites that are saying they are victims of DMCA abuse.

The DMCA (Digital Millennium Copyright Act) is a piece of legislation  that cracks down and heightens penalties on Internet copyright infringement. The fact that Facebook responds to claims about infringement by immediately taking down the reported content is fairly typical. No one wants to get in the middle of copyright drama.

What is being contested is that any person feeling malicious can use one of their dozens of Gmail or Hotmail accounts to report improper use of intellectual property to Facebook. On the non-copyright claim, a report needs to include a name, address, phone number and email along with reasons for the complaint. The social networking site then executes blind retribution without verifying  that the email account attached to the complaint is a valid one. In the case of RedmondPie, 70,000 fans were displaced.

ReadWriteWeb received a statement from Facebook encouraging people to take appropriate legal action if they are the victims of DMCA abuse. The spokesperson said, “Submitting an IP notice is no trivial matter. The forms in our Help Center require statement under penalty of perjury, and fraudulent claims are subject to legal process.” Though, ReadWriteWeb points out that people without access to legal counsel have little recourse but to endure the abuse.

Critics of the process have pointed out that while it is no surprise Facebook doesn’t want to become involved in these types of disputes, the social networking site could verify email addresses by sending a reply email with a verification link or require email addresses in complaints to be associated with handpicked domain names instead of a simple Gmail or Hotmail account. There’s no word on whether Facebook is investigating a better process. The best the social  network site may do is direct fans to the new page.

Topics
What is Mastodon? Here’s why everyone’s talking about this Twitter alternative
How to use Mastodon: create your account, join servers, and more
The most common Zoom problems and how to fix them
This Chrome extension lets hackers remotely seize your PC
The best laptops you can buy in 2022
This free service just hit a huge website security milestone
Best VPN services 2022: today’s top picks
This stunning DIY gaming PC dream machine is made of glass
Apple will pay $50M to settle the butterfly keyboard fiasco
This 15-inch Windows laptop is a great buy while it’s just $139
Get Samsung’s 49-inch Odyssey G9 Monitor for under $1,000 today
Why Starlink download speeds are experiencing double-digit dips
Hackers just stole LastPass data, but your passwords are safe