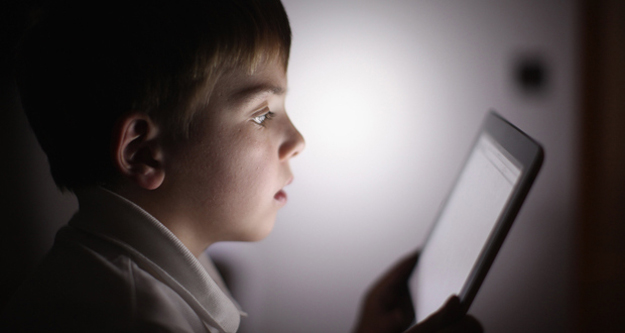 The debate over whether our children are maturing too quickly was reignited last week when the American Academy of Pediatrics published a study which suggests boys are reaching puberty earlier than before. Taking evidence from over 4,000 boys in 41 states, the findings suggested that boys are showing signs of puberty between six months and two years earlier than in past studies. Back in 2010, a similar study of girls in the Journal of Pediatrics revealed that they are also showing signs of puberty earlier than they did in the past – some as young as seven years old.

While these studies are finding evidence that children are maturing faster physically, they are less certain on the causes. While factors like higher caloric intake definitely come into play, there’s also a popular conception that technology may play some roles as children are bombarded with graphic sexual images and violence through TV, video games, and the Internet.

But are kids really growing up faster in the glow of omnipresent ultra-connected screens, or has paranoia led us to blame what might be one of the greatest assets to our children?

Perhaps the most well documented, and seemingly obvious, negative impact of technology on our kids is the growing obesity problem. In the last 50 years, the childhood obesity rate in the U.S. has soared, and according to the American Heart Association, one third of American kids are overweight or obese. A combination of diet and lack of physical exercise is to blame and technology is seen as a major reason why kids are sitting for long periods of time and generally exercising less than their parents and grandparents did.

There are two ways to look at that. You can blame the technology itself, or you can acknowledge that it is actually people – kids and their parents – who decide not to exercise because they would rather play a video game or watch TV. With kids, there is also peer pressure to engage in tech on various levels, and there are other reasons that parents may be comfortable with kids playing video games in the house rather than going out to play sports. Fear of injury or “stranger danger” seems to be far more common nowadays than it was in the past, when children were often given a great deal of freedom to explore the great outdoors.

According to a recent study commissioned by Care.com, there is another technology-related concern that looms even larger in most parent’s minds, and that’s cyberbullying. It found that 62 percent of parents thought “that increased use of texting, social media activity and the playing of more violent video games are resulting in meaner behavior among kids,” and 30 percent of parents of children between 12 and 17 years-old “fear bullying and cyberbullying over kidnapping, domestic terrorism, car accidents, suicide or any other incident.”

Is it a legitimate fear? Is social media necessarily negative? We consulted Dr. Larry Rosen, Professor and past Chair of Psychology at California State University, and an international expert in the psychology of technology.

“I do believe that with social media now reaching younger and younger kids they are getting more practice communicating with others and this can be a good thing,” Rosen says. “On the other hand, they are getting less practice communicating face to face and are missing out on learning how to interpret all of those critical nonverbal cues that make us understand language and conversation.”

He pointed out that young kids “are also being exposed to situations that are not necessarily appropriate for their developmental level, and that is important as they will react from a younger place compared to facing the same situation later in their preteen or teen years when they have passed more developmental milestones.”

Social media is a two-way street. A Pew Research Center report found that 77 percent of teens (aged 12 to 17) use social media and while 69 percent of them say “people are mostly kind,” 88 percent have witnessed people being “mean or cruel.”

Research on the long-term effects of learning social skills online is still coming in, but Rosen doesn’t believe it has to be a bad influence. “Teens who spend more time on social media can learn how to be more empathic by practicing empathy online and then transferring it to situations offline,” Rosen says. “That is a good thing! Yet there are still other situations that may lead to negative behaviors such as being rude and mean online and transferring this to the real world.”

You won’t find a true consensus on many issues when it comes to technology and children, but the impact on education is generally seen as positive. Besides bringing interactivity into the classroom, you simply cannot argue with the benefits of assistive technology for children with all kinds of disabilities. The efficacy has been well-established by a number of studies over the last few years.

You’ll also find a wealth of interesting studies, such as those at the Center for Children & Technology, that reveal the potential benefits of using technology in education to engage children. Rosen concurs. “As far as learning goes, I think technology actually can aid their learning and allow them to be engaged by the technology and develop their own style and pace.”

There are lots of parental filters available, and some ISPs will even offer solutions, so parents have no excuse for not filtering what their kids can access at home and on their mobile devices. What they can’t control is what their kids are accessing elsewhere. The concern isn’t confined to pornography either – there’s also the risk of content promoting suicide and self-harm or exposing children to extreme violence.

The ultimate responsibility for what kids are being exposed to has to rest with parents. Speaking to the Telegraph on this issue, a Google spokesperson put it like this, “Laws alone can’t teach kids to cross the road. The same is true of learning to be safe online. We work with government and child safety organizations to promote sensible legislation and have developed technology, including Google Safe Search and the Family Safety Centre, that parents can use to protect their children online.”

As a tech writer I’m an evangelist for new devices and services ,and I’m convinced they can be good for our children. As a parent I’m concerned about what my kids will be exposed to, especially beyond the family home where I can’t exert as much control. Ultimately I see tech as a set of tools; it cannot be to blame simply because it is possible to misuse it. It’s our responsibility to encourage our kids to exercise, to support their education, and to talk to them about the dangers of the wider world.

It’s tough for a generation getting used to tech and constant Internet access to imagine what it’s like for children growing up in a world where these devices and services are ubiquitous. One of the nicest ways to look at it, and one of the most encouraging, is to listen to children themselves. There’s a series of great studies at Latitude about how kids are reacting to and learning about technology. Like it or not, technology is a fully integrated part of most kid’s lives nowadays, and it’s not going away.

Kids are overwhelmingly positive. They are less jaded and cynical than many adults, and they don’t see barriers to solutions in the same way we do. Maybe a truly useful debate on this topic should include them. They may have more to contribute than we realize.

Where do you stand on the topic? Whether you’re a parent, adult or child – post a comment and weigh in.

German court: Rat out your adult children’s illegal downloads, or pay the fine yourself