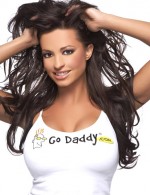 Founded in 1997, GoDaddy is privately held by ex-Marine Bob Parsons and is well known for its racy advertising, featuring race car driver Danica Patrick and other scantily clad women. As one of the largest domain name registrars around, GoDaddy currently manages more than 43 million domain names. It also sells e-commerce, security, and other add-on services for people to manage their Web presence.

According to the Wall Street Journal, GoDaddy had revenues between $750 million and $800 million in 2009. Some reports claim the company generates revenues of $2.7 million a day.

GoDaddy filed (and withdrew) papers announcing an IPO in 2006, and rumors resurfaced earlier this year that GoDaddy will go public again. On Sept. 2, Parsons announced on his campy video blog that he was considering selling the company.

However, $1 billion seems a little much for a company that essentially holds domain names and hosts Web sites. Web.com bought much-smaller-competitor Register.com for $135 million earlier this year.

GPU prices and availability (February 2023): how much are GPUs today?
The best PC power supply for 2023
ChatGPT has a new way to detect its own plagiarism
Samsung Galaxy Book 3 Ultra vs. MacBook Pro 16-inch
The Galaxy Book 3 Ultra is Samsung’s most powerful laptop ever
Nvidia may have another monster GPU in the works, and the price could be outrageous
AMD’s Ryzen 9 7950X3D pricing keeps the pressure on Intel
What is ChatGPT Plus? Everything we know about the premium tier
ChatGPT Plus to bring priority access during peak times — at a hefty price
Usually $3,879, this Lenovo laptop is down to $1,479 today
Get this Asus gaming laptop with an RTX 3060 while it’s $400 off
All of Samsung’s videos from today’s Galaxy Unpacked event
Best 2-in-1 laptop deals: Save on Dell, Lenovo, HP and more