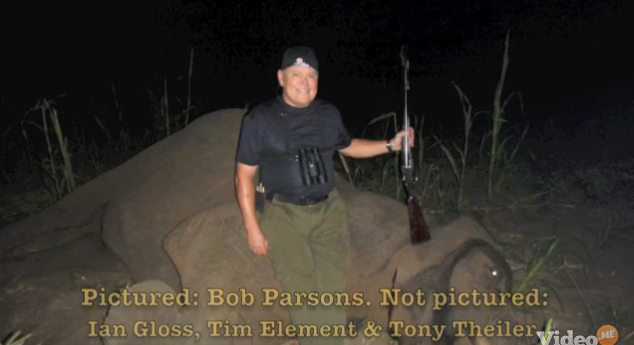 GoDaddy is facing a storm of controversy after a video surfaced on the Internet on Thursday that shows its CEO Bob Parsons shooting and killing an elephant while on a recent hunting trip in Zimbabwe. That video has prompted a storm of outrage and has likely damaged GoDaddy’s brand — at least for the moment.

And at least one of GoDaddy’s competitors is trying to capitalize on the Internet’s outrage. Namecheap is offering $4.99 domain transfers that includes a $1 donation to SaveTheElephants.com. PETA has (predictably) come out against Parsons with a campaign encouraging people to close their accounts with GoDaddy.

Parsons sees his annual hunting trip as a humanitarian mission. He’s helping get rid of elephants that damage farmers’ crops while also providing Zimbabwe villagers with a needed source of protein.

“I’m not ashamed of what I did,” Parsons told myFoxPhoenix Tuesday. “All these people that are complaining that this shouldn’t happen, that these people who are starving to death otherwise shouldn’t eat these elephants, you probably see them driving through at McDonald’s or cutting a steak. These people [Zimbabwe villagers] don’t have that option.”

Whether you agree with Parson or not, the video, featuring a soundtrack of AC/DC’s “Hell Bells” at one point, fails to make a strong case that his actions were indeed “humanitarian” in nature. You can see the video below. But be warned, it’s graphic in parts.

AMD Ryzen 9 7950X vs. Intel Core i9-12900K: Two flagships face off
AMD Ryzen 7000 vs. Ryzen 5000: specs, performance, and more compared
AMD Ryzen 7000: Everything we know about Zen 4 CPUs
Apple’s October event may have been canceled before it began
Developer says it can turn your AMD 6800 XT into an Nvidia 3090 Ti
Best MacBook deals and sales for September 2022
Best gaming chair deals for October 2022
This new Windows 11 feature will help you protect your passwords
HP flash sale: Pavilion x360 2-in-1 laptop just got a $130 price cut
Save $550 on this HP gaming PC with an RTX 3070 today
Hurry — Dell XPS 13 is $550 off in Dell’s monster clearance sale
Flash deal drops this 15-inch Dell laptop to just $250
Best Prime Day Deals: What to expect from the October event