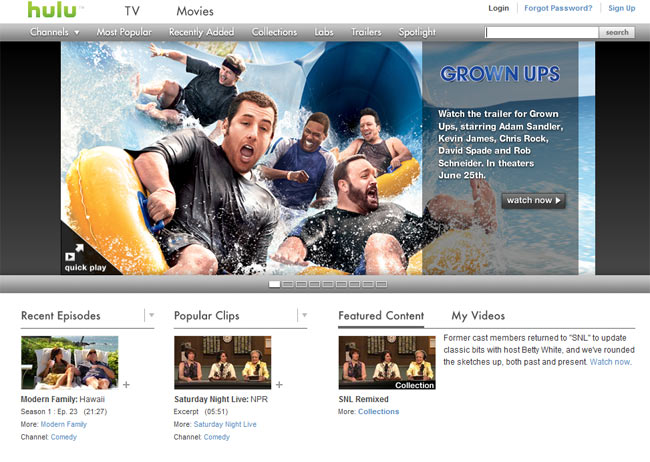 It must have started to feel like the world was turning against Flash, at least for Adobe execs. Apple has brazenly attacked Flash, stopping just short of giving them the finger, and Microsoft confirmed that the flagship Adobe program, well, kinda sucks. HTML5, the computer equivalent of the prettier, more interesting woman that all the men are enthralled with, seems to be the belle of the ball, and Flash was yesterday’s news, sticking around because it had to, not because it was wanted.

But not everyone is quite yet ready to abandon Flash in favor of the sexier HTML5. Hulu has today announced that it will not be adopting HTML5. At least not yet. The online TV provider will continue to exclusively use Flash to play videos, which means that Apple’s mobile devices, and Google’s Android OS will not be able to run them.

For those new to the issue, HTML5 is a new form of code that is used to create websites. The main benefit of HTML5 in this case is that it does not require plug-ins to run video, as Flash does. Plug-ins, according to Steve Jobs are the number one cause for crashes in Macs. As a result, Apple modified its license agreement to force developers to use only Apple’s development tools, a move that prompted an Antitrust inquiry (that began after a complaint from Adobe).

Jobs also stated that the Flash program was, among other things, prone to security issues. In a “dogs and cats living together” sort of moment, Microsoft actually agreed with Jobs, and also claimed that HTML5 was the way of the future.

It is odd that a program that has over a 90 percent saturation rate can be viewed as obsolete by so many, but not everyone is quite ready to abandon Flash for the promises of HTML5.

Hulu is not the first website to confirm its support of Flash, but it may be the biggest- or at least have the biggest parent companies. Hulu, which is owned by NBC universal, Fox Entertainment, and ABC, Inc., issued a statement today on its blog in support of Flash, citing that HTML5 is not yet ready.

“When it comes to technology, our only guiding principle is to best serve the needs of all of our key customers: our viewers,” Eugen Wei, VP of Product at Hulu said. “We continue to monitor developments on HTML5, but as of now it doesn’t yet meet all of our customers’ needs.

“That’s not to say these features won’t be added to HTML5 in the future (or be easier to implement),”  Wei added. “Technology is a fast-moving space and we’re constantly evaluating which tools will best allow us to fulfill our mission for as many of our customers as possible.”

Strangely, Hulu seems to have pulled the post, but there is an existing copy of the full blog on Bing.

So it seems that Flash isn’t going anywhere, at least for now. Hulu is obviously heavily reliant on video technology. If they support Flash, it might be enough to stop people deserting the program- or at least to stop openly telling everyone how much it sucks.

If the Mac gets a Dynamic Island, I’m not sure I want it
Nreal’s Air AR glasses head to the U.S., ready to rock with iPhones
Why I’m almost ready to switch to AMD GPUs for streaming
YouTube’s dislike button is barely functional, says Mozilla
Edit Tweet feature is finally rolling out to Twitter Blue subscribers
Adobe Free Trial: Try Creative Cloud for free
IPVanish Free Trial: Try it for a month, no strings attached
The HP Pavilion laptop is only $500 with this limited-time deal
This 11-inch Chromebook from HP is only $98 at Walmart today
This HP Omen gaming PC with RTX 3070 is $500 cheaper today
This dangerous vulnerability tricks researchers by mimicking old threats
GPU prices and availability (October 2022): How much are GPUs today?
Best Microsoft Surface Laptop deals: Prices from $490