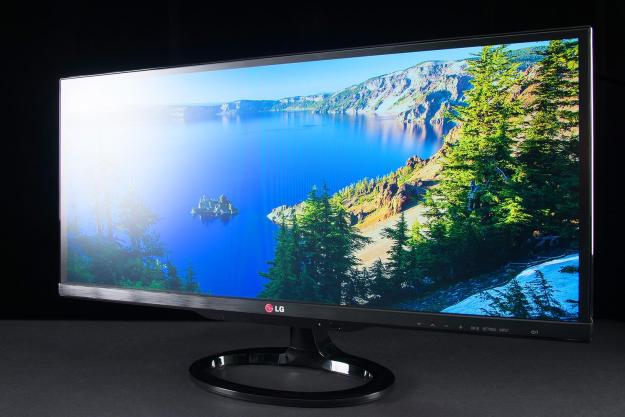 “LG’s LN450W proves that a 21:9 display can be a contender, but the high price will make many consumers think twice.”

Display formats have changed dramatically over the last decade as HDTV has swiftly moved from an expensive toy for the rich and famous to something  the average Joe and Jane can afford. This has encouraged a shift from 4:3 to 16:10 and 16:9, and computer monitors have followed television’s lead in spite of protests from some outspoken uber-geeks. Today’s shorter, wider displays are not the best for word processing, but they’re great for movies and games. However, the shifting sands of format may not have settled just yet.

Some manufacturers, including LG, have started to experiment with 21:9, an extremely wide display format justified by the fact that Hollywood films are often shot with this same aspect ratio. Adopting it means the elimination of black bars and a full, theater-quality experience. That’s the idea, at least.

LG’s LN450W is the company’s latest attempt to popularize 21:9 and is also a follow-up to the 29EA93 monitor we reviewed earlier this year. Though the 29EA93 offered reasonable display quality, its questionable color accuracy and complicated controls turned us off. Will LG’s this newest attempt succeed where its predecessor floundered?

The LG LN450W makes an impression the moment its out of the box, and not just because of its unusually wide form factor. An edge-to-edge panel covers the display itself, and while there are thin bezels hidden around each corner, they quickly fade out of sight. The bottom’s larger, raised frame  highlights the thinness of the bezels on every other side.

Assembling the stand is a cinch and, once constructed, it provides a sturdy frame that rarely wobbles. This is partially because there’s no adjustment besides tilt, which is a disappointment considering this monitor’s price. Similarly priced competitors from Dell, HP and other companies often add height and swivel adjustments as part of the package.

Connectivity options include two HDMI ports, DisplayPort, DVI and component video. The latter is unusual for a monitor, but the LN450W can handle it because it ships with a TV tuner, which also allows for picture-in-picture support.

A row of touch-sensitive buttons line the bottom right edge of the display and can be used to control most of its functions, and there are quite a few. Aside from Brightness and Contrast, there are four color temperature options, sharpness control, black level control, response time control, and adjustments for hue and saturation of six different colors. The only significant feature missing is precise color temperature settings; the existing options are listed only as “warm” and “cool” as opposed to a numerical color temperature.

We found the display’s post-calibration display quality fantastic for viewing images, movies and other media.

Adjusting settings using the touch buttons is a bit of chore because they’re overly sensitive, registering the slightest unintentional tap as input. Thankfully, you don’t have to use them. LG ships the monitor with a remote control that includes a “Settings” button of its own, and it makes adjustments much quicker and easier to pull off. The remote can even, if properly configured, be used to play or pause content, and adjust the volume of the built in-speakers as well.

Yes, this extremely thin display offers audio. This vibes with its potential to serve as a television, but maximum volume is low, and may not be adequate for a large room. Quality is not a bright spot, either, as the sound is tinny and weak.

Handsome out of the box

While most monitors require significant calibration before they offer a truly pleasing picture, we were mostly happy with the LG 450W the moment we took it out of the box. Except for the brightness, which was ridiculously turned up to 100% (we measured it at 375 lux when viewing a sheer white image), we couldn’t find much to complain about with our naked eyes. Images looked crisp thanks to the display’s 2560×1080 resolution and contrast was sufficient to create a sense of depth to colorful images.

Our testing software confirmed our impressions, showing the display capable of rendering 100% of sRGB’s gamut along with 81% of the Adobe RGB gamut. Black levels turned out to be just average, but the display’s extreme brightness made a strong contrast ratio of 680:1 possible. Gamma came in at 2.3 off a target of 2.2 and average color delta error (the standard measurement of inaccuracy) was 2.58, a better result than most. In short, colors looked about as they should, and the display’s contrast was sufficient to create the visual punch you’d expect from a quality monitor even before we touched the controls.

While the LG LN450W provides plenty of options to tinker with, we had a difficult time finding any dramatic improvement over the default settings while we manipulated them. Contrast barely budged, and the same was true for black levels and gamma.

You should think seriously about how you use your monitor before buying the LN450W.

Only color accuracy could be significantly improved, dropping from an average delta error of 2.58 to 1.21. This reduction in error did not come from any one particular color but instead represents an improvement in accuracy across the entire gamut. Only cyan and black failed to reach an error below 1, which is the lowest margin of error the human eye can detect.

We found the display’s post-calibration display quality fantastic for viewing images, movies and other media. Of particular note is the almost complete avoidance of black crush, which means that dark scenes are rendered without any loss of detail. Bright images also delivered solid visual punch thanks to the LN450W’s combination of decent contrast with accurate color. Our only complaint is directed at black levels that, though average, aren’t deep enough to render an inky black.

Surprisingly, the LN450W manages its excellent results without using a glossy panel. This means the display is easy to view in any lighting condition, even if the brightness is turned down to 25 percent.

While 21:9 is marketed primarily for its use with cinema, it can also provide some value to those more interested in work than play. The wide, narrow screen can handle many windows at once, making it great for multi-tasking.

To make this easier, LG bundles a utility called Screen Split which can be used to divide the display into up to four zones. When a window is dragged with your mouse, the zones appear, and dropping the window into one automatically resizes and snaps it to the proper position. Though only a small extra, the software always worked as intended and did make multi-tasking more enjoyable.

There’s no question that the LN450W improves upon the original. Features we enjoyed, like the display’s attractive design and wide range of image settings, have been retained, while weaknesses like color accuracy and confusing controls have been adjusted. We even stated in our review of the LG 29EA93 that a remote would help, and LG listened!

But does this mean that you should run out and buy a 21:9 display? That depends. While there’s no question that movies look great, most people watch in their living room on a TV, not on a PC, and the monitor’s $649 price could be used to purchase a pretty decent 42” or 50” set. And not all films support 21:9, which means you’ll still have to deal with black bars on occasion.

The LN450W is arguably more attractive as a productivity tool. The wide screen can’t offer a lot of vertical real estate, but there are gobs of horizontal space, and that means it’s possible to use three or four windows at once with almost no overlap between them. Two standard monitors placed side-by-side can do the same thing, but only with an annoying bezel between them, and buying two monitors with image quality similar to the LN450W will likely be at least as expensive.

There are still problems that make a broad recommendation impossible, however. Games don’t always play friendly with the resolution, older video cards won’t work with it at all, and the $649 price tag isn’t exactly affordable. There’s reason to buy the LN450W, but you should think seriously about how you use your monitor before forking over your dough.

Upcoming MacBook Pro could have a 20-inch folding display
Even 15-inch portable monitors come in OLED now
The best gifts for PC gamers
Apple mixed-reality headset: Everything we know about Apple’s VR headset
Get this HP gaming PC for $550, delivered for the holidays
Adobe Free Trial: Try Creative Cloud for free
IPVanish Free Trial: Try it for a month, no strings attached
How this new Quest VR app totally sold me on exercising in virtual reality
Walmart shoppers are loving this $159 11.6-inch 2-in-1 laptop
1-day sale drops this gaming laptop with an RTX 3050 Ti to $550
Google may have just fixed Chrome’s most annoying problem
Norton Antivirus Free Trial: Get a week of protection
ABCMouse Free Trial: Get your first month free