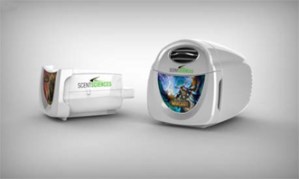 Sometimes you have to overlook little things like reason and common sense to bravely push the boundaries of innovation. Scent Sciences Corporation has taken just such a “damn the torpedoes” approach to gaming, and despite pretty much nobody at all demanding it, this Christmas the company will release the ScentScape, the world’s first foray into the fabled smell-o-scope world.

If this seems like a bad idea to anyone else, please get in line. The device will connect to PCs, and during supported games the peripheral will create the proper odor. In a perfect world, this device would be used for the power of good. Roses and delicious foods would be pre-programmed into the memory of the ScentScape, and frolicking through a pine filled forest, or maybe fighting enemies near a lovely oceanside setting would be an immersive joy. But we don’t live in a perfect world, and while according to the company’s website the device is currently limited to 20 “basic scents” which can be created using cartridges that last around 200 hours, if the Kinect can be hacked, so can this.

The images displayed by the company behind the device show a World of Warcraft cartridge, which is both intriguing and terrifying. It might be appealing to wander through the fields of Azeroth smelling the flowers, but the scents of gamers that haven’t taken a shower in days, wafting from in the city of Dalaran are likely to tax even the most sophisticated machine.

The potentially horrifying new device is being designed for the PC, but it is also being promised for consoles as well. And after all, who doesn’t want to smell the plethora of foul mouthed and often racist preteens that corrupt Call of Duty on Xbox Live. Of course being able to smell other gamers is ridiculous, but the pleasant smell of gunpowder and napalm should offer a refreshing take on games, when not possibly making you violently ill. And what happens when you play a game set in a New York subway tunnel? Ye gods, the horror.

So thanks for that, Scent Sciences. Look for, or more accurately smell for the Scent Scape this Christmas with a price tag of $69 for the device, and roughly $20 per cartridge.

Perfect for work and play, this Dell gaming laptop is $300 off today