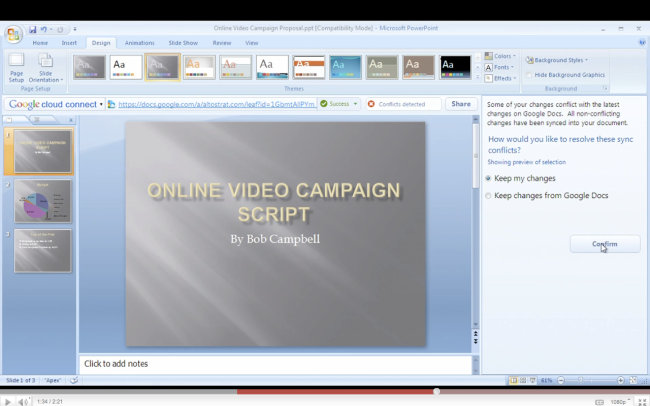 Google today launched a new service that will transfer Microsoft Office documents to the Web, where they can be edited by multiple people in near-real time. Google Cloud Connect Office is available to anyone with a Google account and is installed as a plug-in in the 2003, 2007 and 2010 versions of Microsoft Word, Excel and PowerPoint.

The Cloud Connect Office should appeal to anyone who routinely has to collaborate on Office documents by tediously sending and downloading e-mail attachments. Cloud Connect uses the cloud to keep an up-to-date version of a file, even while several people are working on it collaboratively through an Office program. Backups are also saved, making it easy to revert to older versions of documents.

Cloud Connect won’t allow users to edit Office documents through Google’s own cloud-based document editor, Google Docs. Users who want to make changes to a file will have to do so through Microsoft Office and will, of course, have to have the Cloud Connect plug-in installed.

The origins of the plug-in lie in a program called DocVerse, which Google purchased early in 2010. In November, Google rolled out a beta release of Cloud Connect. It’s now ready for a mainstream launch, according to Google.

Google also announced today a new 90-day program called “Appsperience” to allow companies to test out Google Apps. Companies with less than 500 employees can pay a $7,000 fee (companies with more than 500 employees pay $15,000) to test out Google Cloud Connect and Google Apps. In case you’re wondering, that’s a deal compared to what Google usually charges for the services.

Later this year, Microsoft plans to launch Office 365, which will offer greater support for cloud-based collaborative document editing through Office Web Apps. But unfortunately for Microsoft, Google may have acted just fast enough in releasing Cloud Connect to win over consumers and businesses who might otherwise be attracted to a Microsoft offering later this year.

Cloud Connect is offered for free to consumers and free to Google App costumers and is currently only available for Windows XP with .NET Framework 2.0, Windows Vista, or Windows 7. Google hasn’t said if it plans on making the service available for Mac OS X users.