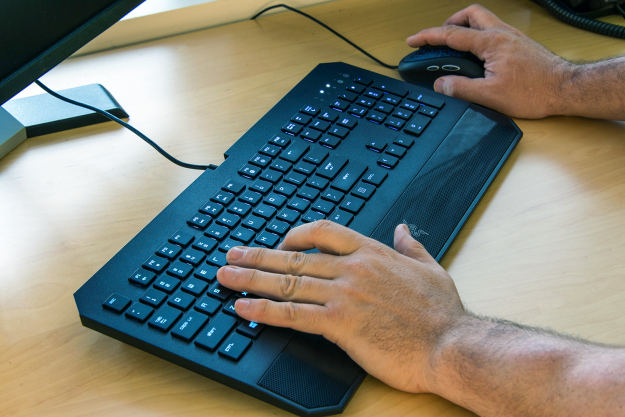 “If Chroma doesn’t catch your fancy, there are better keyboards in the same family as the DeathStalker.”

In the world of gaming keyboards, the leading school of though is that mechanical keyboards are the best, and serious gamers shouldn’t waste their time with anything else. As scissor switch and membrane technology improves, it’s worth reexamining whether that’s still true. There aren’t a lot of opportunities to do so, but Razer’s DeathStalker is one of the leading (and few) membrane gaming keyboards on the market.

We reviewed the Chroma model. Does it make an argument for going insane with the membrane, or is mechanical still king?

Built with thick plastic and lots of support, the DeathStalker doesn’t feel flimsy at all. It takes a significant amount of pressure on the keyboard’s upper area to see any bending, and when it does it springs right back.

The keys have deep, rounded corners, and poke out of individual wells in the chassis. They’re a bit smoother than the light texturing on the rest of the plastic. When you type, the oil from your fingers marks the face of the keys and after a while, they all start to look slightly different shades of black. They also have a bit of side-to-side wiggle in them, which actually helps as you type quickly or jump to a different keyboard section during a game.

The layout on the DeathStalker Chroma doesn’t take full advantage of the physical size of the keyboard. There are no dedicated macro, shortcut, or media keys, so if you want to change songs or launch voice chat mid-game, you’ll need to use a function key or assign a macro in Synapse.

What it brings to the table

There are no dedicated macro, shortcut, or media keys

One of the standout features of the DeathStalker Chroma is 10-key rollover. That means it can accept input from 10 keys at once. Membrane keyboards of old had severe issues with ghosting, and typically could handle as few as three simultaneous key-presses. Newer USB standards have helped raise that number, but ten is high for the category.

There are a few other features to note. The gaming mode allows you to prevent configurable actions like pressing the Windows key or alt-tabbing from happening so you can game without finding yourself on the desktop suddenly. There are macros, too, but if you want to use them you’ll have to use the Razer Synapse app to assign recorded macros to an existing key.

Not the best Chroma we’ve seen

Razer’s Chroma backlighting, when at its best, is an elegant, responsive system. Whether it’s a little distracting or super swanky depends on your taste, but its execution on devices like BlackWidow and Mamba looks simply stunning. Chroma is a little underwhelming on the DeathStalker, however, in a few key areas.

Despite being the only membrane keyboard with multi-color back-lighting, it’s not the same Chroma tech that’s present in other Razer devices. Individual keys can’t be configured or lit, and instead the lights are managed in three large zones.

There’s also a bit of bleed between keys as it animates, which explains the larger sections in the software. Key nears the outside edges, like Escape and Windows, aren’t fully lit. Only the letters, which are fairly small on the keys, let light shine through evenly. I didn’t notice the same with Razer’s BlackWidow.

Synapse is still a solid, if not slightly complicated, application for managing all of your Razer devices. If you have other Chroma devices like a mouse or mousepad, you can tie the color profiles together for neat effects across your desk.

Points left on the table for USB

The DeathStalker is USB only, with a standard length cable, but unlike a lot of other devices, is still rubberized. There’s a rubber grommet to prevent strain at the connection point, but a lot of gamers prefer braided cables now for their durability and flexibility, and it would’ve been a nice touch here as well.

As you sit down to play a game with DeathStalker for the first time, you’ll immediately notice the difference if you’ve used a mechanical keyboard before. The short jump between keys and the lack of raised edges means your hands might be a little lost at first. After you start to acclimate to the difference in key feeling, it does provide a number of advantages.

Chroma is stripped-down on the DeathStalker, and a bit underwhelming.

Your fingers can simply glide over the tops of the keys on their way across the keyboard, and the short, two millimeter throw means pressing them barely stalls your progress. The click action in the keys is a little murky, however. It’s hard to tell when you’ve actually triggered a key press, and the bounce time is long, so keys can’t be immediately re-activated after pressed.

The keyboard’s only method of tactile orientation are two small bumps on the F and J for typing. That’s not of much use when you’re playing games, and you may find your fingers shifting since it’s hard to feel out the difference between keys.

The Razer DeathStalker Chroma has a standard one year limited warranty. It covers manufacturer defects, but not the damage caused by you after rage-quitting League of Legends.

Despite a bit of a learning curve, the DeathStalker Chroma is an attractive keyboard and a unique offering. In fact, there aren’t a lot of membrane gaming keyboards around, so it’s hard to find one to compare it to.

Logitech’s offering, the G105, is a membrane keyboard, but isn’t advertised as such. The keys on the G105 are more traditional tall keycaps, and at just $60, it isn’t in direct competition with the Deathstalker. It only supports seven simultaneous keys and one color backlight, but has a number of dedicated game and macro buttons.

Cougar has a membrane keyboard as well, the 500K, which retails for $80. It packs in the features, with plenty of dedicated media and gaming keys, palmrest options, infinite simultaneous key presses, and Cougar’s ultra-lightweight management software.

Further down the line, the standard DeathStalker offers the membrane feel for a budget-friendly price. If you have a bit more to spend, the DeathStalker Ultimate packs in a super cool color touchscreen. At this middle price point, you’re only spending more for the Chroma, and it’s not nearly as pretty as it is on the mechanical keyboards. If that extra splash of color is what you’re looking for, you found it. If you want a solid keyboard and don’t need the extra pizazz, it’s better to look at the other DeathStalker options.

Topics
Best gaming laptop deals: Save on Alienware, Razer and more
This killer Black Friday deal on an RTX 3060 gaming laptop is still available
Apple will pay $50M to settle the butterfly keyboard fiasco
This stunning DIY gaming PC dream machine is made of glass
Today’s best deals: TVs, laptops, iPads, robot vacuums and more
Cooler Master’s Orb X gaming pod is futuristic and utterly absurd
Get this Lenovo gaming laptop with an RTX 3050 Ti for $550 today
HP’s popular Spectre x360 2-in-1 laptop is $350 off right now
This massive 17-inch Chromebook is under $200 at Best Buy
Get this 15-inch laptop with a year of Microsoft 365 for $199
This Alienware gaming PC with an RTX 3080 Ti is $530 off right now
MacBook Air (M1) is $199 off, with delivery in time for the holidays
I used ChatGPT to interpret my astrological makeup, and it was surprisingly good