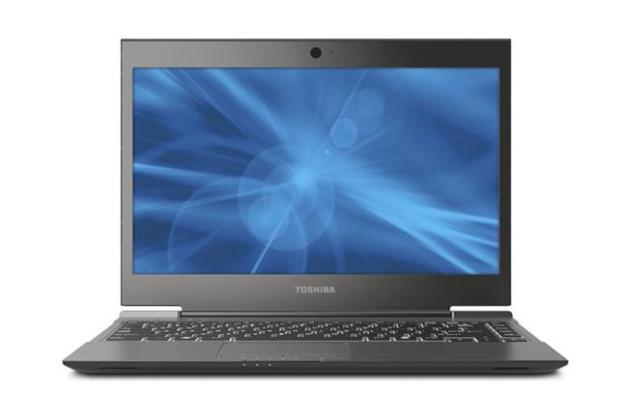 “Toshiba’s Z835 does not make a good first impression. It’s as thin as a piece of cardboard, and feels just slightly stronger. These snap judgments about the laptop’s strength are only worsened by a sub-par keyboard and a display that isn’t sharp or beautiful.”

One of the goals of the Ultrabook specification was affordability, but you wouldn’t know that by looking at the list of options currently available, nor the list of laptops soon to be released. Many models will set you back one Grover Cleveland — and that’s if you don’t pick any options.

There are a couple Ultrabooks that offer a price more than a dollar below a grand, however. One of them is the Acer Aspire S3, which we’ve already reviewed. The other is the Toshiba Portege Z835, which can be had for as little as $799.

This price allows the Z835 to undercut almost every other Ultrabook besides the S3, which can also be had for $799 (or even less, if you wait for the right deal). However, the base model only has a Core i3-2367M processor. That means no Turbo Boost.

We have no doubt that would impact performance, but we aren’t able to confirm it. Our review unit is better equipped, packing not only an upgrade to a Core i7-2677M processor clocked at 1.8GHz but also two additional gigabytes of RAM, bringing the total to 6GB. As if that weren’t enough, our laptop is the “built for business” model. That means it includes a fingerprint reader, a three-year warranty and various software utilities.

It has another extra — a price tag of $1,429. Suddenly, this budget-friendly laptop has turned in to a computer capable of intimidating the bravest wallet. Can the Z835 stand up to its own price? Let’s find out.

We’ve eaten pancakes thicker than this laptop. The 0.63-inch profile is impossible not to notice the instant you look at it. This is no cheap parlor trick made possible by tapered edges or an uneven frame, either. That figure is the maximum thickness — the laptop is actually thinner along the front edge, which rounds upward.

Most of the materials appear to be metallic, but you wouldn’t know that by touch. Everything feels like plastic. The use of magnesium alloy only becomes clear if you place the laptop in a chilly environment, giving it time to cool. Aesthetics aren’t helped by the tacky chrome accents along the touchpad buttons and on each side of the single, wide display hinge.

Build quality reveals the natural opponent of thin design. Strength. Many surfacesfeel flimsy, from the display lid to the keyboard to the palm rest. The lack of stiffness in the display, as well as the hinge, makes wobble a frequent issue. Even normal typing on a stiff surface (such as a kitchen table) causes the display to bend and sway slightly.

That’s not to say the Z835 isn’t practical. It doesn’t suffer from much lower chassis flex and there’s almost no use of glossy material, which means scratches and dents won’t be noticeable. The issue is luxury. Even at its base price this is not a cheap laptop — at the price of our review unit, it’s incredibly expensive. And the design doesn’t keep up with the price tag.

Connectivity options are a bright spot. There are three USB ports, HDMI and VGA out as well as a standard Ethernet jack, separate headphone and microphone jacks and an SD Card reader. Better yet, these ports are all at the rear of the laptop. Hello, Asus, Acer, are you listening? If Toshiba can pack all of this into such a slim chassis, why can’t you?

Stiffness isn’t the only part of the laptop impacted by its thin profile. The keyboard also has issues. Because the laptop is so thin, there simply isn’t any space for key travel. I would not be surprised if the total length of key travel on a ThinkPad T420 is nearly as deep as this laptop’s chassis.

The result is the least tactile laptop keyboard we’ve ever used. That can make touch-typing a bit of pain. Misaligning your fingertips is too easy, and you may not know anything is wrong until you see goobly-gook instead of the characters your intended.

The bad news ends there, though the rest is merely average. Space is not a problem and the layout features large keys across its entire surface. Backlighting is standard and works well, but the lighting used is uneven.

Touchpad quality is acceptable. You won’t receive much feedback from the flat, un-textured surface, but input is received quickly and multi-touch scrolling works reasonably well. Individual left and right buttons are provided, but as with the keyboard, there’s not much travel.

Our review unit surprised us by coming equipped with a matte display panel, which is apparently part of the “built for business” package. The less expensive models instead come with a glossy display. Either way, you’ll be receiving a resolution of 1366×768.

The matte coat does a great job of repelling reflections, and that’s about all the display does right. Black levels aren’t great. Contrast is poor. Colors appear flat and uninteresting. Perhaps the only strong point is the backlight, which is bright enough to allow outdoor use. That’s not true with most Ultrabooks.

Audio is also disappointing. Volume is fine, but music quickly dissolves into a tinny mess if you attempt to play it full blast. Quality is acceptable at lower volume, but then the sound isn’t loud enough to overcome moderate background noise. The poor audio performance isn’t surprising given this laptop’s dimensions, but the Asus UX31 and HP Folio 13 are better.

At idle our review unit had something that most Ultrabooks don’t — fan noise. Not much, mind you, but there was a definite whirr that could be detected even when the laptop was several feet away.

Perhaps it is necessary, because temperatures at idle were high, reaching 92.7 degrees at the rear. That’s high enough to make laptop use uncomfortable.

Stress testing the processor kicked the fan into crisis mode, making it loud enough to be an annoyance. Temperatures at the rear of the laptop shot up to 106.4 degrees, which is beyond what the average user will find tolerable. Even the keyboard was toasty. Using this laptop while running a processor-intensive program will give you a serious case of sweaty palms.

The Z835 isn’t just thin. It’s also light. At 2.5 pounds the Z835 is no heavier than a netbook, and because the weight is spread over a larger surface, it feels lighter in-hand. Sliding this laptop in and out of any bag is easy. You may not even want to bring a bag on short trips, as whatever you use to carry this laptop is likely to weigh as much as the laptop itself.

Toshiba didn’t have much room for a battery in this laptop. Despite that it still manages to deliver average endurance. Battery Eater’s Standard test returned exactly two hours of life, while the Reader’s Test extended that to six hours and twenty minutes. This is better than the Acer Aspire S3 and just a bit behind the Asus UX31. HP’s Folio 13, however, lasts almost two hours longer.

Our review unit came packed to the gills with bundled software. Some of it was in support of hardware features, such as the fingerprint reader. Other programs, such as a Wi-Fi widget that shows nearby hotspots while you’re at the Windows login screen, are meant to provide extra utility.

Many of the software utilities do their job, but integration with Windows is a problem. For example, Toshiba’s ECO Mode power setting does a great job of maximizing battery, but if you change even one setting controlled by ECO Mode (like display brightness or the keyboard backlight) the software freaks out and starts spamming notifications that tell you ECO Mode is now off.

Much of the pre-installed software does have a use. We like the login screen widget that shows nearby hotspots, we like the PC health monitor and we like ECO Mode. We simply want to see the software packaged into a single interface, not only because it’d be easier to understand, but also because it’d cut down on the number of programs running in the background and spamming users with notifications.

The Core i7-2677M low-voltage processor in our Z835 review unit is the fastest of its kind we’ve yet tested, beating the clock speed of the Asus UX31 we reviewed by 100MHz. The 6GB of RAM is unusually robust, as well. Most Ultrabooks only ship with 4GB. Such advantages should make the Z835 surprisingly quick. Let’s see if it lives up to expectations.

SiSoft Sandra’s Processor Arithmetic bench starts our testing on a positive note by returning a combined score of 35.3 GOPS. This is higher than any Ultrabook we’ve reviewed and just a couple points shy of laptops packing mainstream Core i5 processors. Our other processor test, 7-Zip, provided an equally complimentary score of 7,543 MIPS. This is actually higher than some standard Core i5 laptops. The HP Elitebook 2560p, for example, scored 7,304.

PCMark 7, which favors solid-state drives, gave the Z835 a score of 3,274. That’s lower than the Asus UX31, which scored 3,382. The reason for the lower score — in spite of more RAM and a faster processor — is the hard drive. It scored about 300 points lower in the System Storage portion of the benchmark.

As with other Ultrabooks, gaming on the Z835 is unlikely to bring you much joy. DirectX 11 isn’t supported by Intel HD 3000 integrated graphics, which means that we can’t run 3DMark 11. Instead we must rely on 3DMark 06’s score of 3,771. That’s not great, and it indicates a laptop that will have trouble playing 3D games released in the last few years.

Processor performance is an obvious strength of our review unit, but only because it came equipped with a high-end processor. Overall, the performance of the Z835 is like that of any other Ultrabook – fast, but not as quick as a laptop with a standard Core i5 processor.

Toshiba’s Z835 does not make a good first impression. It’s as thin as a piece of cardboard, and feels just slightly stronger. These snap judgments about the laptop’s strength are only worsened by a sub-par keyboard and a display that isn’t sharp or beautiful.

After a couple of days, the strengths of this laptop become apparent. It’s portable enough to take nearly anywhere and it’s relatively powerful, as well. Even the bundled software is a net positive, adding some features that are useful, if a bit difficult to understand.

And then we remember the price tag. Our review unit isn’t representative of the entry-level $829 version. It’s a decked out model built for business, and frankly, it doesn’t stand a chance against similarly priced competition. The $1,429 required to snag our review unit will buy you a Lenovo ThinkPad X1, an Apple MacBook Air 13.3-inchwith a display upgrade or a decked out HP Folio 13. These are all superior.

So what about that cheap base model? Well, the Acer Aspire S3 is just as inexpensive and offers better design and build quality. The main trade-off between them is that of the processor and the hard drive. Toshiba’s base Z835 only offers a Core i3-2367M processor but also includes a 128GB SSD, while the S3 has a Core i5-2467M processor and a 20GB SSD that’s combined with a 320GB mechanical drive.

We’d pick the Acer Aspire S3. Toshiba’s design is too weak to support the laptop even at $829. Let this be a warning to all laptop manufacturers: A thin profile looks cool, but you’d better figure out how to make up for its disadvantages.