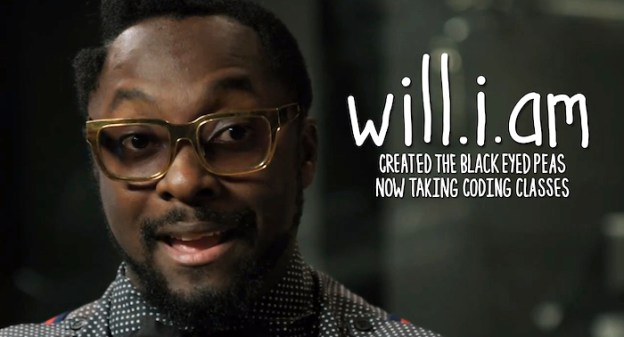 Non-profit organization code.org has gathered together a parade of big names from the world of tech and entertainment in an effort to persuade young people – or anyone for that matter – to get coding.

Mark Zuckerberg, Bill Gates, Jack Dorsey and others from the tech industry appear in code.org’s video alongside the likes of Will.i.am and Miami Heat’s Chris Bosh to talk about their coding experiences and how it can open new doors in a world where “computers are everywhere.”

The six-minute production was directed by Lesley Chilcott, known for her work on documentaries such as An Inconvenient Truth and Waiting for Superman.

In an effort to demystify the process of coding, Dropbox’s Drew Houston compares it to playing an instrument or sport. “It starts out being very intimidating, but you kinda get the hang of it over time.”

Girl Develop It’s Vanessa Hurst says you don’t have to be a genius to code, just determined. And that’s the underlying message running through the video – anyone can code if they put their mind to it….plus a segment about how tech companies make their offices “as awesome as possible” to try to get the very best programmers to work for them – cue shots of people skateboarding down corridors, workers playing on drum kits and video games, employees sunning themselves on the top of office buildings and canteens with people enjoying free tasty-looking meals.

An on-screen message at the end of the video tells us a million of the best jobs in the US go unfilled because only 10 percent of schools teach computer programming.

Brothers Hadi and Ali Partovi, the pair who co-founded code.org, hope their organization will go some way to persuading schools the value of coding lessons, and inspire children to go ahead and give it a try.

Check out the video below.

How to contact Apple support for help with your Mac, iPhone, and more

I bought an overpriced GPU at the peak of the shortage, and I don’t regret it

How to install Windows 11 and 10 on Steam Deck

Mac Studio vs. iMac vs. Mac Mini: Which is Apple’s best desktop?