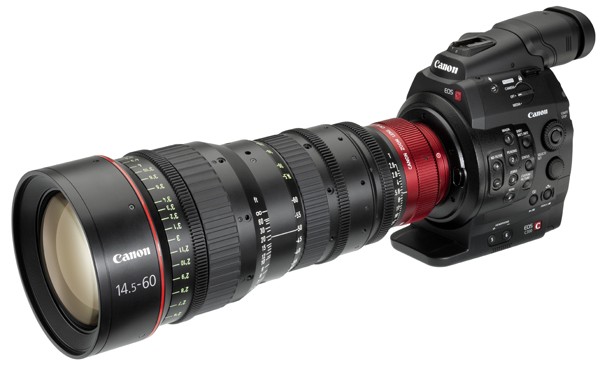 Canon launched its brand new Cinema EOS System at a special event in Hollywood on Thursday, comprising the C300 camera and a range of lenses that the Japanese company hopes will be used by big-name movie directors.

The C300 builds on the success of Canon’s 5D Mark II digital SLR camera, which has become a hit with independent filmmakers since its release in 2008. The popular dSLR was even used to shoot an entire episode of House as well as car racing scenes in Iron Man 2.

With a price tag of $20,000, the C300 doesn’t come cheap, but for professional movie makers it’s more than reasonable. The camera maker’s collection of some 60 EF lenses, used on its dSLR cameras, are compatible with the new camera. Canon is also bringing out two specially designed zoom lenses, costing a cool $45,000 and $47,000, for a PL-mount version of the C300.

Movie legend Martin Scorcese, who was at Thursday’s launch event in Hollywood, said of Canon’s new Cinema EOS System: “I really believe these new tools that Canon has created allow for a much closer, more intimate relationship between the filmmakers and the world they are filming than every before.”

The camera’s relatively small size and lightweight design will also make it an ideal choice for movie crews working in tight spaces.

According to Canon CEO Fujio Mitarai, the new camera performs particularly well bringing out skin tones, and offers the unique quality and warmth of film.

Below you can watch a behind-the-scenes video showing director Vincent Laforet using the C300 to make his latest short film, Möbius. In the video, Laforet talks about the new camera.

“Honestly, my first impression – it’s not the prettiest camera I’ve seen,” Laforet says. “But all that went away when I saw the image from the camera. Here’s a camera that has all the professional bells and whistles that you need for professional production.”

For Hollywood directors, or wealthy amateur filmmakers, the C300 will be in stores at the end of January.

Mobius :: Behind The Scenes from Blake Whitman on Vimeo.