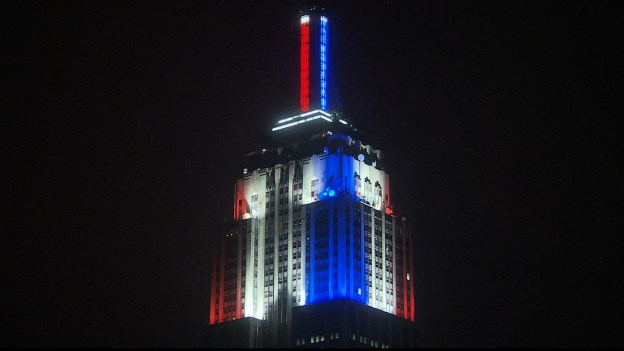 If you live in New York City and are taking an interest in today’s election, stick your head out of the window and take a look at the Empire State Building if you want to find out who your next president’s going to be.

CNN has joined forces with the iconic landmark to reflect the incoming election results using blue and red lighting on the building throughout Tuesday night.

“As each state is projected by CNN and electoral votes are allocated to the candidates, a vertical LED-illuminated ‘meter’ located atop the spire of the building will display CNN’s running tally of the race to 270,” CNN announced on its website.

While the sides of the entire 443-meter-tall building will be illuminated in red, white and blue stripes representing the colors of the national flag, the mast will be lit in Obama-blue and Romney-red to reflect their respective electoral college vote totals.

CNN cameras on a neighboring building will broadcast live pictures of the Empire State Building throughout the night as the votes come in, and if recent opinion polls are anything to go by, there may be just one LED light in it.

Of course, it’s not the first time the famous building has been used to highlight a special event, a tradition that started back in 1932 when a single searchlight was shone from the building to announce the election of New York-born Franklin D. Roosevelt as president.

If you’ve had enough of all the election talk, all the debating, all the speculation, all the speeches, and all the ranting and raving – in other words, if you’re looking for a more sedate way of finding out who the next president of the United States will be, take a look at the Empire State Building’s LED light show.

“When CNN projects a winner of the presidential election, the tower lights of the Empire State Building will change color to all-blue or to all-red,” the news network said. There we go, nice and simple.