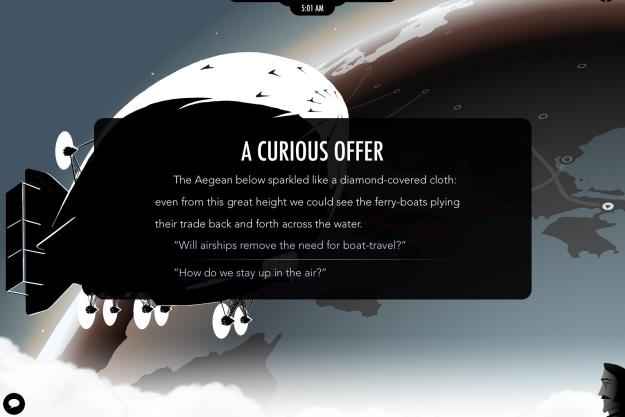 “Inkle Studios imagines a next-gen Choose Your Own Adventure in 80 Days, a hypertext riff on the novel Around the World in 80 Days.”

Who’d have thought that contracting cholera could equate to satisfying tension? In fairness, it was my traveling companion and employer Phileas Fogg who was struck ill after spending too much time in Manila. We were both stuck in Honolulu for a full week though, and that’s a long time to idle in a tropical paradise when you’re trying to circumnavigate the globe in no more than 80 days.

Inkle Studios’ iOS game 80 Days plays like a loving tribute to the classic Choose Your Own Adventure novels of the ‘80s and ‘90s. Based on Jules Verne’s Around the World in 80 Days, players take the role of Jean Passepartout, the valet that accompanied Fogg on his globe-trotting journey.

Inkle Studios’ iOS game 80 Days plays like a loving tribute to the classic Choose Your Own Adventure novels.

The key achievement here is in the writing. 80 Days is an expertly crafted interactive text adventure in which players tap to select the next line in a novel that seems to write itself as you go. Sometimes you’re selecting from a set of direct actions, but others you’re just picking which flavor text suits you. It’s story development by way of hypertext.

Each new city you visit turns the journey in different directions. It’s not strictly randomized; there are fixed events in each location that may or may not occur. You’re only going to catch cholera from visiting Manila and you’re only going to (possibly) be teleported halfway around the world if you embark on a desert expedition. Characters from the novel such as Mr. Fix pop up, but the unfolding of each event is always dictated in part by the choices you make.

Alongside the text adventure is a light exploration and resource management game that consists of sleuthing out as many travel routes as you can and buying/selling goods – or taking out bank loans – to pay for each new voyage. Amidst this is Fogg’s ever-diminishing health, which you manage by seeing to his needs.

The cycle of play thus becomes a juggling act as you attend to Fogg, seek out new destinations, and manage your ever-diminishing funds with each new city you visit. All while you remain alert for the odd occurrences that can pop up when two individuals travel to parts unknown.

All of the text is complemented by eye-catching illustrations that further color every step of the journey. 80 Days isn’t a graphical adventure game in the sense that you’re observing your environment in search of meaningful details. The images that lie beneath the words contribute to the sense of place in the same way that an ambient score would. The game could exist without the graphics, but it’s better off with them.

There’s very little to knock about Inkle’s inventive approach, an evolution of its earlier iOS game, Sorcery. It’s sometimes maddeningly difficult to tease out a seemingly obvious route from one city to another. You’d think that a direct travel option would be able to take you from Burlington to New York, but we were forced to head south to New Orleans before circling back up through Washington, D.C. to get to the Big Apple. It’s possible to fill out your route map by conversing with fellow travelers, but the game never goes out of its way to explain how this system actually works.

Each trip around the world is also long enough that the lack of a journal chronicling your interactions becomes a notable absence. Passepartout picks up lots of information along the way about the different places he and Fogg may visit, and there’s no easy way to refer back to those details unless you’re taking notes independently. Which isn’t a bad thing, but it’s also not something that’s telegraphed very clearly.

80 Days is one of the more inventive games in the iOS App Store, a Choose Your Own Adventure complemented by familiar play mechanics. In grounding its ever-changing tale in a familiar work of fiction, Inkle has created an accessible work of narrative hypertext that is perfectly designed for mobile platforms. It’s rare to find a story-driven game that lends itself well to multiple playthroughs, but 80 Days is just such a rarity.

This game was reviewed on an iPhone 5S using a copy purchased by the author.