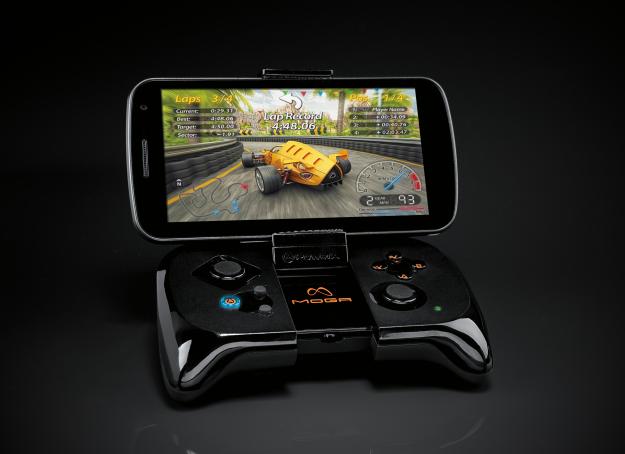 If you ask any developer or industry analyst what the future of gaming holds, one thing that they will all point to is the growth of mobile gaming, especially through the rise of cell phones and tablets. Although still in in its infancy in many ways, mobile gaming is already a lucrative industry. It will only get bigger as smartphone technology gets better and more widespread, so it makes sense that gamers will need better ways to interact with that platform. That’s where Power A’s Moga comes in.

The Moga is a Bluetooth enabled peripheral that connects to Android devices and allows you to play Moga-friendly games with an actual controller. It clamp onto a smartphone or physically small tablet, or it can be used remotely via the Bluetooth connection if you connect your device to a TV, or you have insanely good eyesight and don’t mind playing from a distance off your phone.

Originally announced at CES the Moga device now has an official release date of October 21 with a price tag of $49.99. That price includes a case and two free games: Sonic CD and Pac-Man.

The controller itself features dual analog sticks, a standard four button configuration, and two shoulder buttons. The front section can open up to offer a sliding clamp, which cradles the smartphone or tablet. It is powered by standard batteries, so beyond the normal drain of Bluetooth, it won’t affect the phone or tablet’s battery.

The Moga will require that the games be developed with Moga compatibly built in, which will limit its use at first, but Power A has announced a fairly impressive lineup of developers, including: Atari, Gameloft, Namco Bandai, Remedy Entertainment, and Sega. More are sure to follow.

If you are a member of the beleaguered Android nation, looking for games to rival the increasingly impressive library that is available in Apple’s iOS store, the Moga is something of an equalizer. Google operating system is home to hundreds, even thousands of titles, but it hasn’t earned the reputation for games that Apple’s mobile devices have received. The Moga won’t help bring Infinity Blade or The Walking Dead over to Google, but it could encourage developers to try new things, things that weren’t even possible just last year.

Moga will be compatible with Android 2.3 Gingerbread when released.

Topics
Video-editing app LumaFusion to get a Galaxy Tab S8 launch
Call of Duty: Warzone Mobile: release date and preregistration details
The best Intel processors for 2022
This Dell gaming laptop just got a big price cut — now $700
Best Cyber Monday Deals 2022: Laptops, TVs, AirPods, and more
The best weapons in Modern Warfare 2: every gun ranked
Pokémon Scarlet and Violet: How to beat the Elite Four
Monster Hunter Rise is coming to PlayStation and Xbox, minus cross-platform saves
Best gaming laptop deals: Save on Alienware, Razer and more
‘Wordle’ today, December 2: Answer, hints, and help for word of the day (#531)
Elden Ring for PS5 is $15 off with delivery in time for the holidays
The best iPhone games to play in December 2022: Marvel Snap and more
The best Android games available right now (December 2022)