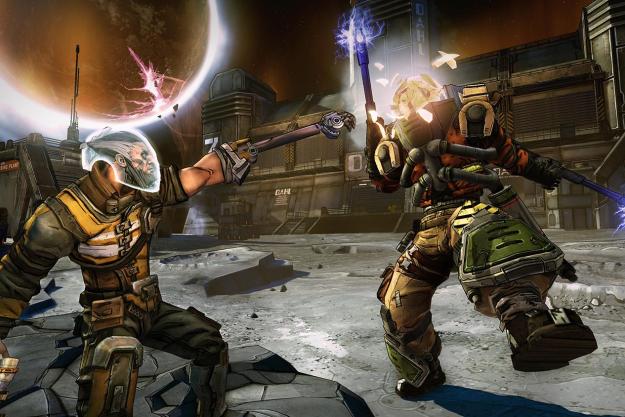 “Borderlands is a game of deadly math, but the numbers don’t quite add up in Borderlands: The Pre-Sequel.”

Borderlands is a game of deadly math. Probabilities and variances fuel gruesome murder. The series’ arsenal of a “bajillion” guns is the product of a random number generator that operates within predetermined boundaries for each type of firearm. Every time you pull the trigger, numbers crunch the bullet all the way to its destination. A satisfying spurt of blood and loot follows the equal sign, and the player moves on to the next equation.

Borderlands: The Pre-Sequel is what happens when the numbers don’t add up.

Developer 2K Australia at least deserves credit for producing a convincing forgery. The Pre-Sequel moves, looks, and feels exactly like Gearbox Software’s past efforts in every possible way. It’s a large, sprawling shooter with role-playing game-style progression, and a distinctly comic book-inspired personality. The trademark irreverent humor is all over the place, along with the litany of murder arenas filled with baddies and bosses for you to shoot at.

Borderlands: The Pre-Sequel is what happens when the numbers don’t add up.

Yet something is amiss in the way it all comes together. It’s not the story, a fan-serving lore dive that charts the descent of Borderlands 2 antagonist Handsome Jack into villainy. It’s not the new setting either, an airless, low-gravity moonscape that creates a new, wonderfully vertical emphasis on your loot-shooting. And it’s definitely not the loot itself, which still explodes forth out of enemy corpses in a pleasing shower of colorful sparkles.

No, the chief problem is that 2K Australia never shows its work. The Pre-Sequel is a carbon copy of Borderlands 2 that isn’t able to establish an identity of its own. A handful of new mechanics and killing tools aside, it is fundamentally the same as its 2012 predecessor. Shortcomings that were easily forgiven before are harder to overlook here. This is a paint job and little else; it might as well have been framed as some weird mega-DLC for Borderlands 2.

That’s not entirely terrible, to be clear. Borderlands 2 offered an expert evolution, building out the first game’s basic ideas in fresh directions that helped to bolster the sequel’s ever-lengthening tail. The core mechanics are as enjoyable as they’ve ever been. It’s just plain fun to run around blasting everything in sight, thanks to eminently responsive controls that suit the fast-paced action perfectly. Sequel enhancements like secondary currency and mega-bosses return, and they’re as welcome as they were before.

But in the midst of all of that remain the same niggling annoyances. Ammo and cash auto-collect when you run over them, but only some of the time (sloped surfaces seem to confuse the auto-collect). And Moonstones, a secondary currency similar to Borderlands 2’s Eridium that funds ammo capacity upgrades, still need to be manually collected one at a time, every time, same as ever.

Even worse is the lousy checkpointing. The Pre-Sequel’s huge environments are filled with elaborate networks of pathways that often fold over onto themselves. They’re a strategic boon in combat, but a pathfinding nightmare. A mission objective that appears to be directly in front of you might actually require backtracking around in a large loop for 10 minutes. Or it might just require finding the lone, nearly invisible doorway that’s right in front of you but two levels down. Many times, the most challenging obstacle to completing a given mission in Borderlands: The Pre-Sequel is the simple act of locating the tiny, green-glowing object that you need to interact with. That’s not anything other than bad design.

The Pre-Sequel is a carbon-copy of Borderlands 2 that never really finds an identity of its own.

In fairness, 2K Australia tried to pull a few things off. The low-gravity combat, enabled by a new primary setting on the surface of Pandora’s moon, Elpis, leads to some truly epic encounters. Gearbox had some fun in Borderlands 2 with the notion that there’s no fall damage taken when you drop down from a great height, and the Aussie team takes that further by allowing players to ascend even higher.

The airless moon’s surface also creates a need (among the human characters, at least) for oxygen, and that leads to the addition of air jets. You need it to breathe, of course, but these air jets also enable new boost-assisted jumps, and area-of-effect damaging “butt slams,” both of which bring a new layer to the fast-paced combat.

There’s also more variety in the bajillion-strong arsenal thanks to new laser weapons – of the beam, spread-fire, and “pew, pew” variety – and a new “cold” elemental effect that allows you to freeze and potentially shatter enemies. These, coupled with a new Grinder that allows you to break down three weapons and re-form them into something new, inject a marginal amount of freshness.

Four new playable characters help as well. Each feels unique, with skill trees that fall roughly into one existing archetype or another … but often with a twist. Claptrap, now playable for the first time, is a particular standout. His assorted skills favor technical play – use this type of weapon in these circumstances, enjoy these advantages – and his more powerful buffs typically come with a disadvantage attached. Much like the character, playable Claptrap is perfectly realized as a love-it-or-hate-it proposition.

Unfortunately, for all of that, the game just never manages to stand out. It’s underwhelming in a way that no fan would ever want Borderlands to be. None of the obvious set-piece missions or bosses feel particularly memorable. Even the Easter egg that riffs on Borderlands 2’s little Minecraft nod feels forced. Some might defend The Pre-Sequel as an off-year game, the product of a second-string team that’s meant to keep fans satisfied while they wait for a truly new Borderlands game down the road.

That’s baloney. It’s valid to expect more from your sequel than a mere surface-level evolution. There isn’t a AAA game out there that doesn’t exist to make money, but Borderlands: The Pre-Sequel stumps for dollars in a brazenly insipid way. It’s a paint-by-numbers effort, almost from top to bottom. The deadly math is still there, and the numbers are still gloriously crunched in gallons of blood and piles of loot, but the calculations just don’t add up.

This may not be the Borderlands game that fans want, but is it really the one they deserve?

This game was reviewed on a first-generation Alienware X51 gaming PC using a code provided by 2K Games.