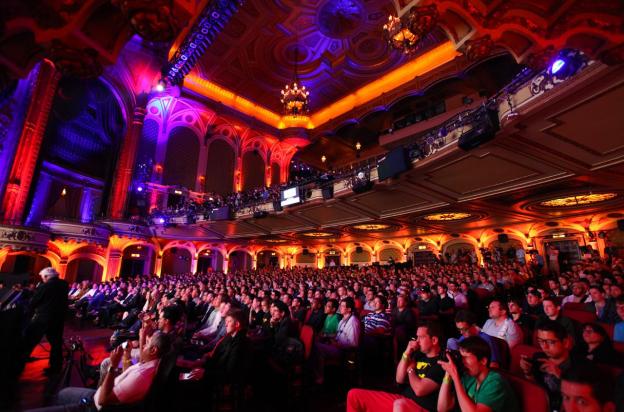 For the last few years, E3 veterans have grumbled that the show “isn’t what it used to be.” Many take it even further and start to question the need for the show at all, claiming that online news cycles have sucked the wind out of E3’s big reveals. These days, a company can release a trailer any day of the week knowing it will spread around global fan networks faster than an image of a poor cat, doomed to be forever gazed upon because of its slightly grumpy visage.

This year, however, is different.

This side of E3 may be one of the less glamorous… but it may be the most important for the future of gaming.

We’re looking at the perfect storm for E3. It may not rival the revelry of the “good old days,” whenever those may have been, but it will rank among the most important shows in the event’s history.

Along with the obvious headliners, the PlayStation 4 and Xbox One consoles, E3 2013 also gives the assembled developers a chance to finally show off the next-gen games that they have been sitting on for months and years, waiting for Sony and Microsoft to give them the OK. There will also be other new tech, like the Oculus Rift, and several new pieces of hardware for both console and PC revealed for the first time.

Although E3 won’t officially open its doors until Tuesday, June 11, the show really begins on Monday. That’s when Sony and Microsoft kick off the next-gen battle in earnest. Not only will we learn more about the systems, it will signify the beginning of the PR and advertising war that will dominate gaming through the holiday season. We probably won’t have every question answered, but gamers will know enough to make a decision and choose a side.

PC gaming will continue, mobile gaming shows no signs of slowing, and the Wii U still has a chance to cut out its own niche. But the next age of gaming begins now, and what we take away from E3 2013 will help to shape gaming for the next decade.

Microsoft vs Sony: Round 3… Begin!

The focus of this year’s E3 is certainly on the upcoming hardware, and with Nintendo apparently taking this generation of consoles off, the battle comes down to the PlayStation 4 vs. the Xbox One.

The current console battle tilts slightly in Microsoft’s favor, but the numbers are very close. Both the Xbox 360 and PlayStation 3 have sold over 77 million units worldwide, with only a few hundred thousand units separating the two. The differences are primarily regional; the 360 is dominant in the U.S., with 40.4 million sold compared to the PS3’s 24.5 million. The PS3, meanwhile, leads (slightly) in Europe, Asia, and the rest of the world.

With the coming of the new consoles, we’re back at zero. Like the classic image of two samurais staring at each other across a bridge, silently measuring the other up, Sony and Microsoft get to feel each other out before the fight really begins.

To this point, Sony has been firmly in control. The February unveiling gave the PS4 momentum, and the reveal played to what Sony knew its strengths would be – the hardware. Beyond that, it kept things very loose. Sony confirmed that it would have streaming tech (something we already knew), mentioned more social connectivity, and showed off a few games. Then it waited for Microsoft to make some tough decisions.

Microsoft’s move to do away with used games was always going to be unpopular, but inevitable if the plan is to require the installation of games to a hard drive, like most most PC games already do. Sony may end up doing the exact same thing, but it has wisely kept its collective trap shut and let Microsoft take the heat and draw the ire of fans. On the other hand, Microsoft heads into E3 after having shown the broad appeal of the Xbox One, freeing it to focus on what E3 is really all about: games.

Having already revealed most system details, Microsoft can spend E3 talking about gaming. Meanwhile, Sony has more features to cover with the PS4, dividing its time.

Don’t Count Nintendo out yet

The Wii U arrived with something of a thud in 2012. Actually, “thud” might be generous, since that implies it made a sound. To say it arrived with a whisper might be more accurate. Since its November launch, the Wii U has sold only 3 million units globally, a sad fall from the 99.6 million Wii units sold over its life so far. By comparison, Nintendo’s significantly less sophisticated handheld system, the 3DS, has sold 10 times that number. There are serious problems on the Wii U front, but don’t count Nintendo out yet.

The Wii U needs games. Not just exclusive games, but access to the massive libraries of former Nintendo games – all of them. It then needs to educate users on the joys of external hard drives, as the Wii U’s internal storage is not designed for, ya know, storing things. There have only been two exclusive Wii U games released this year, and only 10 games total throughout all of 2013 so far. It seems unlikely that Nintendo can hope to beat the much more powerful PS4 or Xbox One, but it can at least build up a strong and loyal audience.

This is a gradual process, but one Nintendo needs to figure out how to speed up. There will never be a better chance than this E3. Nintendo is shying away from the more grandiose – and often poorly received – press conferences of its past, and will instead focus on smaller, more intimate sessions. The emphasis will be on games.

Imagine, after Sony and Microsoft have their moments and are basking in the praise (and inevitable scorn) of gamers, Nintendo announces a new Zelda. Then a new Metroid. Then lets people actually play the new Super Mario Bros., new Smash Bros., and new Mario Kart. Then announces that the Nintendo eShop will be able to access the thousands of games from its 25-year history. All of it coming within a year. If the PS4 and Xbox One sell their consoles at $400+, and if Nintendo can possibly lower its own price point, the Wii U instantly becomes much more attractive. Some or all of this could happen. So don’t count Nintendo out.

All the pretty games

While hardware will surely end up stealing headlines this year, many of the games at this E3 will hold their own just fine. It might take a year or two for developers to hit their stride when it comes to making games for the new systems, but there will be plenty of surprises when it comes to the software. Microsoft alone has at least eight games to unveil or demo for the first time, and Sony is likely to have a few surprises as well, even after the fairly impressive number of titles that debuted at the PS4 reveal.

Then there are all of the developers that have been forced to withhold their next-gen projects, waiting for the hardware reveals. Whether it’s something we’ve only seen teased, like Murdered: Soul Suspect from Square Enix, or something entirely unexpected, there will be a lot to talk about. We’ll probably see a few surprises from long-dormant franchises, and maybe some titles using the new hardware in ways that we don’t yet know are possible. New facts about the hardware brings new facts about the games that run on them, after all.

All that glitters isn’t a console

The PS4 and the Xbox One are going to dominate all discussions of new technology shown at E3, but they won’t be alone. Expect to hear plenty about new peripherals, as well as devices that could significantly impact gaming as a whole like the Oculus Rift, and other VR-related tech. It’s all just waiting to be discovered.

This side of E3 may be one of the less glamorous compared to the omnipresent new consoles, but it may be the most important for the future of gaming. We may glimpse the next Oculus Rift, or the haptic technology that makes its way in to the next next-gen consoles. This E3 will be remembered for a long, long time.

Topics
E3 isn’t dead just yet as ESA plans physical show for 2023
The best PS4 controllers
PS Plus Premium lineup includes Final Fantasy, VR games, and more
The Lord of the Rings: Gollum is finally launching quite soon
Save $50 with this (Oculus) Meta Quest 2 Cyber Monday deal
GameStop Cyber Monday Deal: Buy 2 Get 1 on all preowned Xbox One and PS4 games
Starship Troopers: Extermination turns sci-fi satire into a co-op shooter
Score $90 off an Alienware gaming chair for Cyber Monday
How to get Battle Tokens in Warzone 2.0
How to redeem Mystery Gifts in Pokémon Scarlet and Violet
Call of Duty: Warzone 2.0 desperately needs to give players more health
Don’t miss this Xbox Series S Cyber Monday deal — ends midnight
Now’s the perfect time to stock up on PS5 controllers