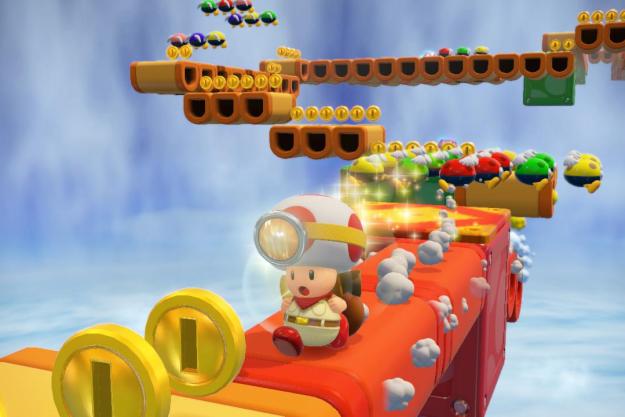 “After 30 years, Toad has a game that reflects him perfectly: just the right season and proudly of a different time.”

Captain Toad belongs in a museum! So does his adventure pal Toadette, for that matter. That’s not to Indiana Jones shame the duo upon the release of Captain Toad: Treasure Tracker, their very first starring vehicle. As characters, Toad and Toadette are admirably simple. They walk briskly, pick things up, and that’s it. Their quest for golden riches is also limited in its goals: These two get around, but all they want to do is pick up coins, jewels, and gilded stars. Even by the standards of the countless throwback games made by small studios in recent years, Captain Toad is lovably anachronistic.

As characters, Toad and Toadette are admirably simple.

Captain Toad and Toadette are adventurers gathering up precious goods in odd little fantasy capsules. The stages in Treasure Tracker start out simple. Looking like bottle worlds freed from snow globes, each stage is a multi-tiered structure full of hidden nooks and crannies. Raised at the highest peak, hidden in an obscure tunnel, or waiting in the diorama’s nether region is a golden star. Examining the stage from multiple angles by spinning the camera, your goal is to move Toad to the star, and unraveling how to do that is lusciously vexing.

One example: an early stage in the game’s second act (out of three, plus a set of bonus stages) is a tiny swamp, covered with chomping vines and wandering trees with goofy faces, like a Sesame Street spin on Dagobah. Spin the camera around, and you can see the star sitting on a raised platform just beneath the surface. Toad can’t jump, but there isn’t an obvious hole to fall through to the star, so it’s off into the woods, dodging the patterned movements of the enemies to find switches that might change the landscape.

Even when you get the star, though, you haven’t totally conquered the stage. Hidden here, as in every stage, are three diamonds, plus a tertiary goal that’s always different. (In this example, you have to beat all the chompy vines.) Now, the whole stage requires re-examination and more careful analysis of what isn’t readily visible on the surface. Treasure Tracker never pummels you with difficult-to-untangle spaces. It’s always just complicated enough to make you think.

Replaying stages to get everything is part of Treasure Tracker‘s pleasure, but it doesn’t come at the expense of variety. The most impressive part of the game is how it almost never recycles ideas. One stage has you dodging carnivorous swamp weeds, but the next has you tapping the Wii U GamePad screen to move huge platforms. Another has you dodging heat-seeking bullets wearing ferocious grins, another riding a mine cart and shooting turnips and huge stacks of coins.

Even when it revisits an idea – all three acts have you facing down a googly-eyed dragon in a volcano – it always completely warps the challenge. The first time, you have to hide behind rocks to avoid fire, but the next you have to blow into the GamePad mic to raise little fan platforms. Some are easier than others, but they never feel lazy or ill-considered.

Replaying stages to get everything is part of Treasure Tracker’s pleasure, but it doesn’t come at the expense of variety.

Those GamePad controls and the lush high-def graphics are Treasure Tracker‘s only nods to modernity, enhancing its tactile similarity to Nintendo’s casual experiments on Super Nintendo or the Game Boy Advance. No Miiverse social features, no online multiplayer, and at this point no downloadable add-ons; Treasure Tracker‘s as self-contained as its stages. The focus is appreciated, though. Puzzling stages are what this game excels at, and nothing else clutters them… except for coins.

An otherwise successful anachronism, Treasure Tracker‘s only blemish is a throwback collectible that seems to be present for no other reason than Super Mario tradition. Toad and Toadette collect coins in every stage. When they collect 100 coins, they get an extra life. Enemies can kill Toad, and there are pools of lava and poison swamp water to fall in, but death isn’t a serious threat here so the extra lives stack up as you collect the literal piles of coins dotting the stages.

The little chime of a Mario coin or collecting the also ubiquitous green “1-Up” mushrooms is as infectious as always, but it feels like unnecessary clutter. If it’s easy to restart a stage in seconds, why have extra lives at all? If all the coins do is shine and go ding, why have them making so much unneeded audio/visual noise?

Treasure Tracker‘s old-fashioned style wouldn’t suffer from losing vestigial parts like coins, but it’s also not mortally wounded by their presence either. Even drowning in a sea of gold coins, Toad and Toadette are still winners, their shoebox-sized escapades softly impressive. Treasure Tracker is the perfect length. Gunning for 100-percent completion of everything should take the average player about 10 hours.

While less grand than Nintendo’s recent Wii U efforts like Super Mario 3D World, which this spins directly off of, Captain Toad: Treasure Tracker feels like the type of effortlessly strange and fun game that Nintendo used to pump out monthly 20 years ago. Perfect for a museum then, but no less worthy of play time, Treasure Tracker is yet another feather in Wii U’s increasingly feathery cap.

Topics
The best Nintendo Switch games for 2023
Best video game deals for January 2023: PlayStation, Xbox, Switch
The Legend of Zelda: Tears of the Kingdom: release date, trailers, rating, and more
All cross-platform games (PS5, Xbox Series X, PS4, Xbox One, Switch, PC)
All missable characters in Fire Emblem Engage and how to get them
How to use PS5 voice commands
How to enter the Forbidden Meadow in Forspoken
Assassin’s Creed Mirage pre-order: Get a $10 Best Buy gift card
I played the original Dead Space before the remake — and I regret it
How to overclock Intel’s Arc GPUs for better performance
Samsung’s crazy rotating 4K gaming monitor is $700 off today
Forspoken cloaks: all cloak locations and abilities
Forspoken necklaces: all necklace locations and abilities