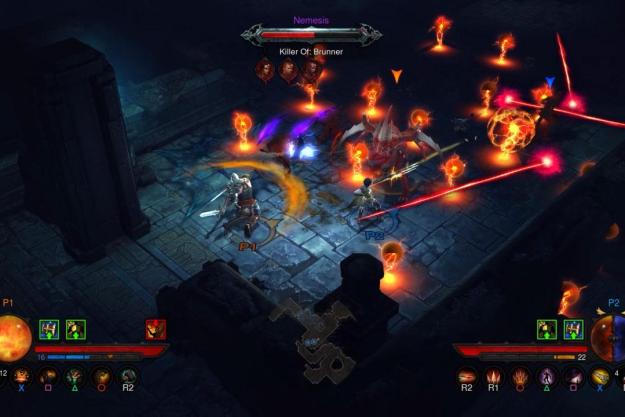 Diablo III: Ultimate Evil Edition takes place within the confines of a vile ecosystem. From the countryside around New Tristram and its neighboring towns to the heights of Mount Arreat, everything sucks all the time. Think you’ll go for an evening stroll down by the river? Not unless you want to get ravaged by a wandering gang of angry Goatmen, you won’t. Into spelunking? Hope you like vicious spiders of various sizes! And grotesque fat corpses full of worms! And endless wars between angels and demons!

Every scenic ridge, every awe-inspiring ruin is equally packed with sweet, sweet loot and oozing grotesques. All that said, it’s oh so easy to hopelessly lose yourself in Diablo III thanks to its unseen ecosystem. That interplay and flow of game rules and action, the hidden ties between art and input, are well known for their addictive balance in Diablo III. The Ultimate Evil Edition, newly released for consoles, is the most admirably cultivated realization of that hidden ecosystem yet.

Contrary to its sinister name, Ultimate Evil Edition isn’t just a milquetoast repackaging of Blizzard’s two-year-old action RPG trying to gouge fans out of a few extra bucks. Far from it. In addition to a compilation of all previous Diablo III releases, from the original to 2013’s console version and the recently released Reaper of Souls expansion, the Ultimate Evil Edition adds a selection of subtle, significant new features.

These changes, including the Loot 2.0 system that modifies how and what treasure you find while playing, introduce the series to PlayStation 4 and Xbox One in slick style. Diablo III looks and sounds good on Sony and Microsoft’s latest machines; it’s not a visual showcase for either, but its visual polish is unimpeachable. That said, Ultimate Evil Edition‘s most attractive improvements are beneath the surface.

It cannot be emphasized enough how essential the changes brought to bear in this version of the game are to its feeling of deliciously rewarding accessibility. Prior versions of Diablo III relied heavily on outside factors for players to build the best-equipped character. In the original, it was the auction houses that forced players to accept that great, high-level loot was so rare that it simply had to be purchased with in-game or real currency. The first PS3 and Xbox 360 version was free of the auction houses, but loot and even leveling was unbalanced when adventuring in local multiplayer, a major hook for the console version.

Ultimate Evil Edition is successful in letting you play and loot free of these mitigating problems. Thanks to Loot 2.0, the massive overhauling of how the game randomly drops new goodies, the flow of gear is suited but not too specific for your character. Local multiplayer has also thankfully been modified, so loot drops become specific to up to four classes playing.

If a player one Barbarian picks up a sweet shaman mask, it will automatically go to the player three Shaman. At no point, even across difficulties, does it feel that new gear is frustratingly scarce, requiring hours upon hours of grinding. This leaves the game feeling graceful and nimble.

Diablo III: Ultimate Evil Edition‘s most attractive improvements are beneath the surface.

Speed seems to have been a marching order for the Ultimate Evil Edition, as the flow of combat has also been wisely tweaked alongside the loot drops. Chaining enemy kills together still builds up “Massacre” XP bonuses, but they’re easier to build thanks to Nephalem Globes. Chaining 10 quick kills together, for example, multiplies earned experience by 1.5 but also makes an enemy drop a glowing ball that gives you a temporary stat boost. Making a demon hunter arrow 10 cultists in five seconds, only to get a shiny orb that doubles your damage to take down the 10 shambling demons behind them just as fast is sweet. Even high-level confrontations have a welcoming twitchy, contained feel.

Ultimate Evil Edition isn’t so closed off that it limits Diablo‘s essential multiplayer spirit. Other little changes, like new gifts, offer an advantage for playing with others. When you get a legendary item drop, for example, there’s also a chance for a random gift drop. A tiny little wrapped box will plop down in the midst of all the monster viscera, which can then be picked up and sent to anyone on your friend’s list. When opened, the box randomly rolls for a legendary item specific to the character class that opened it. It’s a nice, inviting touch, well considered for a console version of the game where you can’t hop on Battle.net to coordinate larger exchanges.

For Diablo devotees with countless hours clocked, Ultimate Evil Edition is hardly essential. It’s welcome for those that played on PS3 and Xbox 360, since you can transfer save games from both of those to a new console of your choice, even Xbox 360 to PS4 or PS3 to Xbox One. The loot changes, Reaper’s Act 5 and new Adventure Mode (read about it in our Reaper of Souls review), and local multiplayer improvements also recommend it to those console legacy players, but it’s still not a must for casual fans of the series’ 2013 console debut.

Anyone that has never played Diablo III, whether because of its controversial design aspects like the auction houses or because of its PC-centric play style, or just because you never got around to it, Ultimate Evil Edition is the easy gateway to pass through. No barriers stand between you and the addictive, silken action that’s been the series-defining trait for nearly two decades. It is a balanced, inviting ecosystem, just waiting to be plundered.

This game was reviewed on a PlayStation 4 using a disc provided by the publisher.