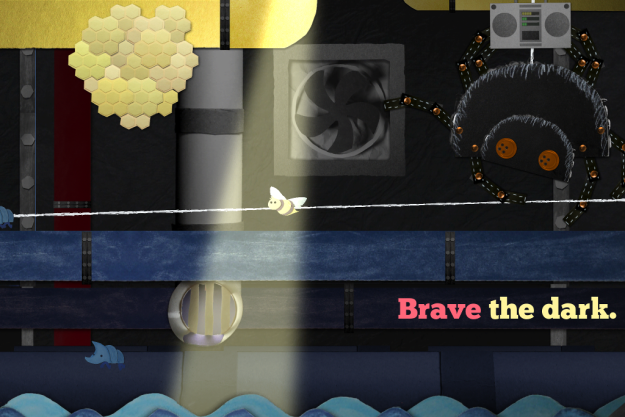 “Ephemerid: A Musical Adventure is a beautiful audiovisual journey through the brief-yet-spectacular life of a short-lived mayfly.”

Ephemerid: A Musical Adventure is a game about getting laid. Technically, it’s about the cycle of life, from birth to death. But when you’re a mayfly with a life that spans only a handful of hours, getting laid becomes a pretty important thing. How else is the species to survive?

SuperChop Games’ brief, colorful adventure is referred to in the iOS App Store as a “rock fairy tale,” and that feels like an accurate description. The whole thing lasts no more than an hour, and while there are video game-y tap-and-swipe sequences that keep you involved, there’s no reward, no failure. There’s only the story and your unchanging path through it.

Each stage of play amounts to a new track in SuperChop’s stirring prog-rock opera. This notion plays into the presentation of the level select screen, which is a spinning record split into 12 sections, one for each level. There’s even a turntable-style slider at the bottom of the screen that allows you to futz with the speed of the music (and, by association, the play).

The piece as a whole is an audiovisual delight, with environments and the objects & beings that inhabit them built primarily out of hand-drawn and papercraft creations. Some nice particle effects, used to lend additional flavor to select sequences and call the eye’s attention to different parts of the screen, further enhance the presentation. All of it is backed by the melodic scream of electric guitars and thumping kick of double-bass drums.

The levels play out in chronological order, following the mayfly at the heart of the story from birth to death. Cleverly, the cycle repeats automatically when you reach the end; the spinning record continues to turn, transitioning seamlessly from the last level back into the first one. The mayfly explores the world, overcomes adversity, rescues its mate, and ultimately procreates before slipping free of its mortal coil.

Ephemerid: A Musical Adventure is a game about getting laid.

It’s just too bad that the video game-y bits feel so forced. Your taps and swipes are always set in time to the music, but between the lack of a risk/reward system and the surreal presentation, these interactions feel meaningless. You’re tapping a series of logs to the beat of the music, clearing a path for an army of marching beetles… but why? To what end? There’s only the visual feedback of the logs breaking, and they’ll break even if you don’t tap them. The music, the unfolding story… all of it remains the same, even if you’re not doing what the game expects you to.

To its credit, SuperChop sticks to a minimalist focus in not including any sort of tutorial. There’s some satisfaction to be had in poking and prodding the screen to figure out how to get the music rolling, even if there’s ultimately no apparent meaning attached to those interactions. It’s all very intuitive and easy to puzzle out – again, challenge isn’t this game’s forte – but the “figure it out yourself” approach lends itself well to Ephemerid’s playful, lighthearted tone.

In the end, all of your efforts to guide this little mayfly through life lead it to a final act of procreation. The two insect lovers fly off into the heavens, their tiny bodies transposed with the ghostly Chinese dragons that they so resemble. It’s an ending that is also a beginning, a spoiler that spoils nothing. Ephemerid is about the cycle of life; we all know where the beginning and the ending are. It’s the journey that ultimately matters.

If you’re looking for challenge or hooks or gameplay that involves any sort of deductive reasoning, you’ve come to the wrong place. Ephemerid: A Musical Adventure is built as an experience that strips the life we know to its foundations, presenting the journey from birth to death from the perspective of a creature for which every brief, too-fleeting moment matters.

This game was reviewed on a second-generation iPad Mini using a code provided by the publisher.

Wordle is getting its own board game adaptation from Hasbro