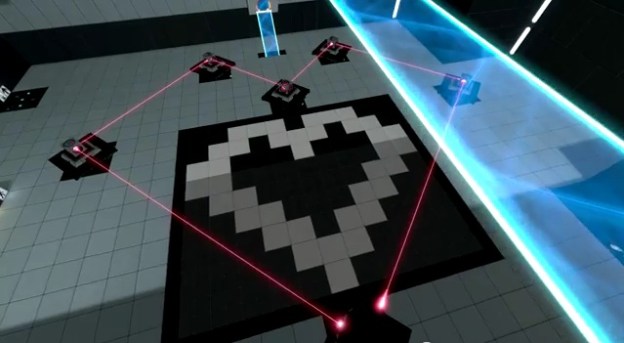 Using video games to propose marriage is nothing new—in fact it is the natural extension of geekdom. They are still somewhat rare, but when done correctly they can quickly take on meme status and hurtle around the intertubes like a straw in a tornado. But a new high-water mark may have just been set, thanks to Gary Hudston, who used the critically acclaimed game (especially acclaimed by us) Portal 2 in order to propose to his girlfriend, Stephanie “Stephy” Harbeson. And he did so with the help of the game’s developers, Valve.

To celebrate Stephy’s 21st birthday, Hudston decided to pop the question. But the couple, who had been together for five years, had long since agreed that any marriage proposals needed to have a little something extra. Taking a bended knee on the beach simply wasn’t going to cut it, so Gary decided that he would commission a special user-designed mod level for Portal 2.

According to Yahoo Tech, Hudston repeatedly attempted to contact Valve, but received no response. He then managed to contact  Ellen McLain, the actress that lent her voice to the game’s pseudo-villain, GLaDOS. Once he explained the purpose of the project, she agreed to help.

“She was just lovely, and with her help we were able to contact Erik Wolpaw [one of Portal 2’s principle writers] who promised to try and fit in some time to record some dialogue for me,” Hudston said.

With Valve on his side, and the voice actress responsible for GLaDOS making a return appearance to speak his lines, Hudston then needed designers to help bring it all to life. To accomplish this, on July 19 he went to the forum Thinkingwithportals.com, and posted a request for help. His description was cryptic, but he explained that he needed help designing two very simple levels as well as a special final room.

“I’m afraid that the nature of the project doesn’t allow me to go into any further detail on a public forum as it would entirely defeat the purpose of it all if anything were leaked,” he posted. “I’m aware that this might make this whole thing seem a little bit suspicious but I assure you that you will understand my reasons once I explain it in detail to you.”

More intriguing to the people on the forums than the mysterious nature of the request was the news that Hudston had the blessing of Valve, and that McLain would be reprising her role for the project. As anyone that has ever spent time on forums can attest, a random post without details can quickly lead to hijinx. But Hudston had proof, and he then soon had two volunteers: Douglas “TopHATTwaffle” Hoogland and Rachel “Miss Stabby” van der Meer, both well-known modders in the Portal circles. Six weeks later, the project was done.

With the easy part done—contacting an international company, scheduling a much sought after voice actress to reprise a critically loved (and legally protected) character and then seeking out top level talent to create an intricately designed level all for no pay—Hudston then settled into the difficult part of presenting the project to his girlfriend, Stephy. After opening her birthday presents, he then presented her with the level.

“She was confused at first, but played along as she knew I was clearly up to something. She tells me that it crossed her mind that it might be a proposal but she decided that she was getting ahead of herself and that it was probably just an elaborate birthday gift. That was until she realized that GLaDOS was talking directly to her.

“From that point on she was quiet, save for some muttered disbelief and, by the time GLaDOS was asking her the question, she was in tears. When she looked over to me I was already on one knee with the ring. Also in tears.”

The full run through can be seen below, and a cinematic version has also been released. The level itself is also available for download for those that want to feel the love, or perhaps for another gamer coincidentally named Gary Hudston who is also coincidentally looking to propose to a woman named Stephanie Harbeson. Granted, the odds of that are somewhat higher.

So congratulations to Gary and Stephy! The wedding is set for February, which gives people plenty of time to come up with their best “the cake is a lie” joke.