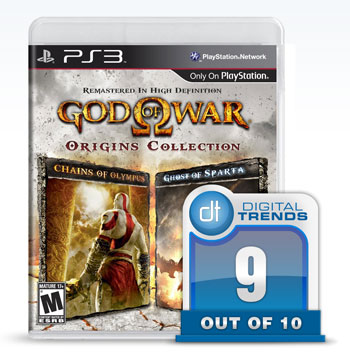 If you are a fan of the God of War series but don’t own a PSP, today is your lucky day. Or rather, September 13 will be your lucky day, when God of War: Origins is released. Both God of War titles on the PSP, 2008’s God of War: Chains of Olympus and 2010’s God of War: Ghost of Sparta are autotuned for the PS3, with shiny new graphics and modified play controls, and are found on the same disc, all for $39.99. So to put it in perspective, you have two of the best PSP games, digitally remastered in HD, for $20 less than a new PS3 game. In terms of value alone, Origins is an incredible deal.

If you did play the originals on the PSP, then you know what to expect for the most part. The stories remain the same, the play controls that worked so well on the PSP are ported back to their natural environment, and it plays just like you would expect and hope a God of War title to play. A few new bonuses and extras have been included, but nothing really that would make you stand up and take notice. This game is for people who are fans of the series but don’t own a PSP — which is a lot of you.

God of beating the snot out of people

Again, if you played the PSP games, then you know what to expect in terms of plot. For the rest of us (myself included), Origins offers two new side stories in the life of everyone’s favorite chain-linked, god-murdering sociopath.

The first of the two games, Chains of Olympus, is a prequel to the original PS2 God of War, which has Kratos still in the employ of the gods, doing their bidding and smiting their enemies, with great vengeance and furious anger, etc., etc. Your overlords have a new mission for you, and send you to the city of Attica to put foot to ass of the invading Persian Army.

Once you have single-handedly butchered thousands of illegal immigrants from Persia, the real story begins as the world plunges into darkness. Kratos then puts on his detective hat (and by that, I mean he beats the crap out of people until he discovers the truth) and dives into the lesser Pantheon of the Greek Gods.

The early stages are fun enough as you tear Persia a new one, but it isn’t until the gods appear that the story really takes off. Once it does, Chains of Olympus becomes a worthy addition to the franchise.

While Chains is a prequel, Ghost of Sparta is set between the first and second games after Kratos has ascended to the role of God of War. Kratos is soon plagued by visions which lead him towards a family reunion where he learns that his brother, Deimos, was taken and imprisoned by Thanatos, the God of Death. Things are never easy with Kratos, and the quest leads to a bloody battle through Greek mythology, filled with foreshadowing of what is to come in the future for Kratos.

Each game has its moments, and each face the same pros and cons as all the God of War games. Sometimes the plots lean toward the convoluted, and if you don’t like the character of Kratos — and since he is a loud-mouthed, somewhat one-dimensional murderer, that is fair — then more of the same is not a good thing. The plots are also side stories; there is always the  inherent danger with stories of that nature that the stakes can only go so high, since you know the overall story continues.

But, for those that do like Kratos and his hands-on approach to problem solving, and those who enjoy the setting, developer Ready at Dawn has nailed the look and feel of the games. If you enjoyed the three console God of War games, then playing these two should be a no-brainer.

Both titles should take around eight hours or so, which individually might be a bit skimpy, but paired together is more than God of War III, for less money.

The good, the bad, the HD

Really, there are only two questions worth looking at when it comes to the God of War: Origins Collection. You already know the stories and settings are solid — they both received a lot of love from critics and fans alike — so the real questions are how does it look, and how does it play.

As for the looks, both games look passable. Neither can compare to God of War III, but they aren’t hard on the eyes either. Ghost of Sparta was one of the best-looking PSP games to begin with, and the HD treatment has improved upon that. It still has some rough patches, but it would have been an impressive game among the early PS3 titles.

Chains looked good for the PSP in 2008, but even with the HD upgrade, the graphics are just a bit simple. There are notable exceptions, and the game never looks bad, but it never really hits the PS3 level. Unfortunately for Origins, it is going to be compared with the God of War Collection, which upgraded the PS2 titles into HD. Coming from the PS2, those games had a huge advantage over the PSP titles, and as a result, they looked amazing about 95-percent of the time (the cinematics remained mostly unchanged from the PS2).

The PSP simply isn’t that powerful, and so the graphics won’t compare to games that began on a console and were then upgraded. That being said, both games still look great, the settings are still awesome, and after a few minutes you won’t notice or care. Especially thanks to the gameplay, which remains a shining point for the series.

Really, all hack-and-slash games should just go ahead and copy the God of War formula. Unless they have a way to improve upon it, the God of War gameplay is simply the best in the genre, with perhaps one or two exceptions. The games are just fun to play, and the combat moves fluidly — plus it is easy to feel like a bad motha as you destroy hundreds of enemies. Combos are easy to rack up, and the controls, which were designed for PSP but based on the PS2, have no trouble making the jump to the PS3.

And really, what else matters? The game is just fun to play, just as the other God of War games are. If you hate the style of the games, then there is nothing to change your mind here; if you are a fan, everything you might hope for remains intact in the series.

There are the obligatory changes to the magic, and upgrades a’plenty, but the core mechanics are the same, and that is the important thing.

If you are a fan of the series, then rush out to buy this game. It is two titles of the franchise you love, for a discounted price. The graphics are a bit dated, even with the HD remastering, and Chains has moments where the setting appears bland or Kratos looks blocky. Both titles are also on the short side, but together there is a lot of gaming to be had.

It really is hard to fault this collection. Going after the graphics is nitpicking when compared to the gameplay, which is as good as ever. The stories — while they sometimes lack the epic scale that the other games feature, partly because of the PSP’s nature and partly because both are side stories — are welcome additions to the franchise.

This collection is for the people who never played it on PSP. The upgrades aren’t significant enough to justify buying the games again, but for those that never got the chance to play the originals, this collection is a must-own.

Xbox and Bethesda’s Developer_Direct: how to watch and what to expect
The best RPGs for the Nintendo Switch
GTA 5 cheat codes and secrets for PS4, PS5, Xbox, and PC
The best Xbox Series X and Series S deals for January 2023
The best SSDs for 2023
WWE 2K23 brings the pain with John Cena, Cody Rhodes, and Bad Bunny
The best gaming PCs for 2023: Dell, Origin, Lenovo, and more
You can turn off Frey and Cuff’s banter in Forspoken
This Alienware gaming PC with an RTX 3090 is $520 off right now
NBA All-World aims to replicate Pokémon Go’s success starting today
This samurai strategy game is my new deck-builder obsession
How to connect an Xbox controller to a PC
WWE 2K23: release date, editions, pre-order, and more