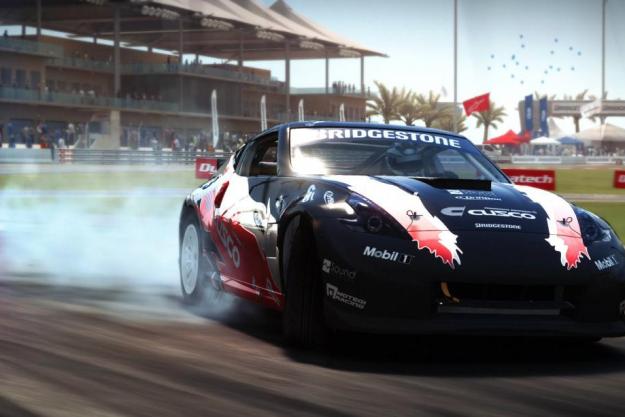 “Grid Autosport ditches the feature-bloat of other racing games in favor of a lean, race-first experience.”

Like a taut action thriller, Grid Autosport effortlessly shoos you from one race to the next, with high-speed thrills that keep your focus locked on the stretch of pavement right in front of you. It’s hard to shift your attention when you’re struggling to hang on to third place with only three tight turns left in the final lap.

This is a true-blue racing game.

Developer Codemasters is in its element. The simulation here feels top-notch, a worthy successor in a line of games that includes the studio’s exceptional Pro Race Driver. Cars have a real sense of weight and momentum as they cruise around Autosport‘s winding tracks. True-to-life physics actively punish players weaned on arcade-style drift & accelerate tactics. The play here requires a much more thoughtful approach; speed into a hairpin turn at 100 mph and you’re not going to pull it off with a quick jerk of the handbrake. You’re just going to crash and damage your car.

There are some concessions in the name of accessibility. A limited-use rewind feature allows players to take a mulligan on a botched turn or passing attempt, in solo play only. Guide lines teach players to economize movements and where to accelerate or brake. Other difficulty settings automate elements such as traction control and tweak the AI of opposing racers. They’re familiar features for fans of racing games, but none of the switches or sliders break the authenticity of Autosport‘s purring simulation engine.

There is a career mode, but like everything else, it’s designed to emphasize getting players out on the road as quickly as possible. Grid Autosport breaks down racing into five separate disciplines: Touring, Endurance, Open Wheel, Tuner, and Street. Each has its own level progression, with stronger performances leading to better sponsors and bigger XP rewards for completing an assortment of objectives.

The individual disciplines tap into different sets of skills. Touring is the most traditional, with players fighting to break away from the pack on multi-lap tracks that offer an even mix of turns and straightaways. Street tightens up the surroundings considerably, demanding more gas/brake micromanagement as you weave through walled-off urban roadways. Open Wheel emphasizes speed in F1-style cars. Endurance is largely a test of managing tire wear during 8-minute races. Tuner is perhaps the most challenging; its drift-focused races and time trials are tough to master in a game that’s built for simulation rather than arcade play.

The beauty of Grid Autosport‘s multi-disciplinary approach is it never locks players into following a particular path. Each one has its own, separate level progression – complete with discrete sponsor, car, and upgrade unlocks – and it’s entirely up to the player to choose which discipline to pursue at any given moment. The endgame’s Grid Legend Series requires some mastery in all five categories, but you’re never outright forced to compete in one type of race or another.

Codemasters doesn’t attempt to make the spaces between driving around in circles interesting.

There’s further variety in the way sponsors fit into the game. You always choose one before the start of a racing series, and your choice of sponsor dictates everything from XP-earning objectives to which car you’ll be driving. All of this information is communicated via sparse, text-heavy menus, which helps to keep things simple. And since sponsorships are always short-term commitments, lasting only as long as a single racing series, it’s easy to jump around and try out different rides.

This lean framework is a nod to all the players that just want to get behind the wheel and hit the gas. Instead of worrying about which paint job to apply or how you’re going to respond during a post-race press conference, you’re running pre-race practice laps to better prepare yourself for the qualifier time trial, in the hopes of landing a better position at the starting line on race day. Codemasters doesn’t attempt to make the spaces between driving around in circles interesting.

Just don’t go in expecting photorealism. The lean design extends to Grid Autosport‘s visual execution. The PC version is naturally more of a looker than the PlayStation 3/Xbox 360 releases, but none of them are on the level with recent or upcoming competitors like Forza Motorsport 5 and Driveclub. Codemasters wisely included a cockpit view – a response to its widely criticized absence in Grid 2 – but presentation clearly wasn’t the key design pillar that it is in so many other modern racing games.

That’s not to say Grid Autosport is ugly. It looks good enough in motion. Again though, the game’s strength isn’t how much stuff it has, how many bells and how many whistles; it’s about what’s not here. Like a rebuilt engine, Codemasters tore down the notion of what constitutes a modern racing game, examined and polished off every part, then reassembled it piece by piece. The result is a like-new experience that’s all about revving engines and burning rubber.

This game was reviewing on a first-gen Alienware X51 gaming PC using a code provided by Codemasters.

The Game Awards 2022: Here’s the complete list of nominees
The best 1080p graphics cards in 2022: great options for Full HD
The best gaming keyboards for 2022
Best Alienware deals for November 2022
‘Wordle’ today, November 28: Answer, hints, and help for word of the day (#527)
Need a PS5 controller? This Cyber Monday deal has you covered
Save $50 with this (Oculus) Meta Quest 2 Cyber Monday deal
GameStop Cyber Monday Deal: Buy 2 Get 1 on all preowned Xbox One and PS4 games
Starship Troopers: Extermination turns sci-fi satire into a co-op shooter
Score $90 off an Alienware gaming chair for Cyber Monday
How to get Battle Tokens in Warzone 2.0
How to redeem Mystery Gifts in Pokémon Scarlet and Violet
Call of Duty: Warzone 2.0 desperately needs to give players more health