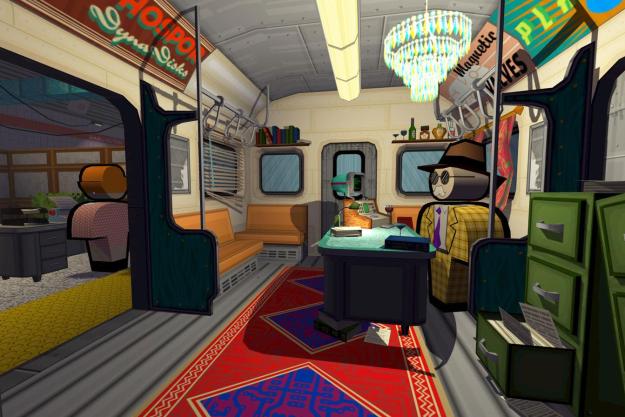 “Necrophone Games does interactive comedy right in Jazzpunk, a surreal adventure in which the laughter is its own reward.”

Jazzpunk feels like the video game love child of an unholy union between Family Guy and Sun Ra. It’s a lo-fi comedy adventure that emphasizes absurd humor as your sole gameplay reward. There’s no unlock system, no character progression, no dangling carrot of any kind to keep you on the hook. There’s just this completely ridiculous freeform spy comedy daring you to poke at its every nook and cranny.

Don’t make the mistake of thinking when you read this that there’s no unifying plot to tie each new location to the last one. Jazzpunk is structured like a narrative-driven adventure. Think of it in the same way that you would movies like Airplane! or Naked Gun, both of which are called out as inspirational works on Necrophone’s website. The plot is there to tie everything together, but the heart of this experience is the non-sequitur comedy.

Jazzpunk feels like the video game love child of an unholy union between Family Guy and Sun Ra.

The joy of Jazzpunk, then, lies in experimentation. While the game is divided across a series of objective-oriented levels, sticking strictly to the path laid before you misses the whole point. The first mission alone is home to interactive minigame riffs on Frogger and Left 4 Dead, a robo-prostitute that puts a whole new spin on the phrase “insert coin,” and a very well placed Wilhelm scream.

On a purely functional level, you peer into Jazzpunk’s bizarre world from a first-person perspective. The controls aren’t complex at all; you can move and look around, jump, swap between the various items you might be carrying, and interact with virtually anything. Most objects and beings in each level’s freely explorable space can be spoken to or dealt with in some way.

There are very few rules at play. What’s true in one level may not be true in others. You’ll find a few specifically earmarked “Sidequests” in the first mission, for example, but then the term never surfaces again. A handful of jokes recycle, particularly some of the interactive minigames and certain bits of character dialogue, but just about everything you poke and prod provides a fresh dose of humor.

The emphasis on free experimentation makes it difficult to judge the scope of Jazzpunk. If you sit down to play a linear adventure game – which, it’s fair to argue, is missing the point – you could breeze through the story in a couple of hours. Commit to plumbing the depths for every last joke, on the other hand, and you could see an exponential spike in the time you’ve invested. Be very clear on that point before you play: if you prefer games with a rigid structure and familiar rewards system, Jazzpunk probably isn’t going to cut it. The trick is to not rush anything and just immerse yourself.

A cartoonishly surreal presentation holds everything together. Fans of gaming’s indie scene will immediately note the visual similarity here between Necrophone’s work and Blendo Games’ Gravity Bone/30 Flights of Loving. There’s no denying it, but Jazzpunk delivers a different kind of play. More importantly, the imagery works well with both the humor and the free jazz-y soundtrack that follows you everywhere.

In fact, Jazzpunk feels more like a spiritual companion to – oddly – Nintendo’s WarioWare series than anything else. This is no minigame collection, but the spirit of that design comes across in the way you discover an increasingly bizarre array of disconnected play moments with every step you take. It’s considerably more edgy and deranged than the Nintendo series, but the dream-like quality of your wanderings is a kindred spirit to WarioWare’s frantic fever dreams.

Comedy has proven in the past to be a tough thing to pull off in video games, but Necrophone Games does it. Some humor is there to be found and some requires explicit interaction, but all of it fits hilariously well into Jazzpunk’s surreal world.