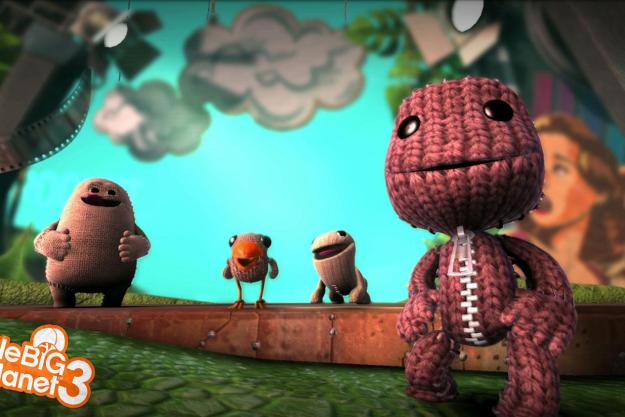 “LittleBigPlanet 3 is a well-intentioned pastiche of different activities that is simultaneously too restrictive and too open-ended to achieve greatness.”

LittleBigPlanet’s debut at Game Developers Conference in 2007 inspired promise that is almost impossible to quantify today. It seemed insane. An arts & crafts platformer where you made your own levels and seamlessly shared them with other players who you could also collaborate with? Madness! In less than a decade, ideas that seemed almost impossibly exciting have become commonplace. Even Mario is getting in on that action in the post-Minecraft world.

From the start, LittleBigPlanet 3 lacks conviction.

When you hear Stephen Fry’s woolen voice launch into yet another monologue at the beginning of LittleBigPlanet 3 about the power of creativity and how you, the player, are such a special snowflake, it’s impossible not to wonder what could possibly be different this time. After five Sackboy-starring games, after Minecraft created a set of creative tools that people responded to on a scale far bigger than creator Media Molecule ever managed, what is the promise of LittleBigPlanet in 2014?

That question is the confused heart of LittleBigPlanet 3, a well-intentioned pastiche of different activities that is simultaneously too restrictive and too open-ended to achieve greatness.

From the start, LittleBigPlanet 3 lacks conviction. There are multiple introductory vignettes standing between you and actually playing the game, from a short live-action film of kids gleefully coloring to a whole monologue about your personal pod, the launching pad to LBP‘s campaign, online community, and creative suite of game-making tools.

Stephen Fry lulls you into a stupor going on and on about the potency of the Imaginarium that it barely registers when little Sackboy is sucked into the junk closet world of Bunkum. After all, when he lands and meets the light bulb-headed Newton, voiced giddily by Hugh Laurie, it’s time for a tutorial level where you’re stopped constantly and taught how to play.

All of these scenes, first steps, and tutorials are quality stuff taken on their own merits. Sackboy moves with the same speed as he did in the wonderful LittleBigPlanet PS Vita, the speechifying from Fry and Laurie is full of warmth, and the patchwork look of the game remains nicely palpable. This still feels like a physical place, but LittleBigPlanet 3 constantly stops you from touching it.

Sumo Digital, the studio taking lead here alongside Tarsier (LBP Vita), had a chance to break from the cycle of over-explanation and handholding that made the first two LittleBigPlanet games hard to penetrate. But the learn-by-telling-rather-than-doing pattern flows through both LBP3‘s story and the Poppit Puzzles, its other pre-built game.

This still feels like a physical place, but LittleBigPlanet 3 constantly stops you from touching it.

The story does open up once you push through the first of four multi-stage maps. After Newton dupes you into unlocking the Titans, little balls of concentrated creativity so powerful that they drive ol’ Dr. House Bulb evil crazy, Sackboy sets off into the wilds of Bunkum to wake up the land’s three hibernating heroes and save the day. Little sack bird Swoop, burlap doggy Odd Sock, and a cool size-shifting golem named Toggle – series newcomers with abilities that complement Sackboy’s – wait to be found in three themed hub worlds.

Sumo Digital continues Tarsier’s good work on LBP Vita in giving the series campaigns that can stand on their own, something the original Media Molecule games struggled with. Once you start digging into the ’50s B-movie hodgepodge, every stage overflowing with rotting pieces of film and curling old posters, Sumo starts throwing in new ideas. Sackboy gets a host of new tools, like boots that let him jump then dash around, a helmet that lets him slide down ziplines, and a gun that shoots little balls that teleport him if fired at special glowing surfaces.

The new characters feel great too. Odd Sock is an extra fast little pup who can run up walls and jump off them for neat platforming challenges, while the winged Swoop frees you from the ground, feeling more maneuverable and smooth than Sackboy did with LittleBigPlanet 2‘s jetpacks.

Toggle is the secret MVP. Switching between his big bruiser and tiny alter ego forms is awesome, and it’s used to play with the reactive physics of the game in thoughtful ways. Need to reach a high platform that sits above a pool? Sink with Big Toggle, then launch upwards with Little Toggle. The old LBP controls sometimes buckle under the strain of the new toys and characters – switching between the items is especially awkward – but it all works.

The problem is that all the new stuff is locked away in very specific moments. The new characters are barely in the game, really. Once you’ve unlocked Odd Sock, played his special stage and any of the brief side missions in the Manglewood hub, it’s back to all Sackboy, all the time in the next hub. Unlocking Swoop leaves you with scarcely anything to do before you’re thrust into the game’s final boss, which is the only part of the game that has you switching between all of the characters on the fly.

Rather than new abilities that change how LittleBigPlanet plays in fundamental ways, the items and characters feel like unexplored sketches at worst, and like big, polished examples of how to make your own stages at best.

Even as creative sparks, though, they don’t fully work. One reason LittleBigPlanet PS Vita was so good is that Tarsier made a campaign that also did a fine job of teaching you how to use LBP‘s creative tools, forcing you to touch, reshape, and place objects in the world as part of your natural progress. LBP3‘s main story missions are devoid of any active creation, favoring pure platforming instead, with a stray blank spot in the background for stickers.

If you have the right sticker, you can plop it down and unlock more of the little parts and doodads you’re collecting in stages to use creating your own. Each hub world has a Build Challenge, like in the first world where you’re tasked with building a fast car, then racing it. Moments like that are brief and actually easy to miss in the crowded map, though. More problematic is the fact that they’re optional diversions that don’t challenge you to really learn the creation tools.

Poppit Puzzles, a side campaign of spatial challenges, does a better job of teaching the tricky minutiae of actually making things in LBP3. Here you learn the skills needed to engage with the more complex aspects of building your own games using Media Molecule’s versatile tools. Even still, Poppit Puzzles is bogged down by constant interruptions from characters telling you what do rather than just letting you learn by playing.

The strict segmentation of features and challenges doesn’t help. All the pieces are here, but they’re not presented in a digestible way. By the time you actually dive into the intimidating blank space of LBP3‘s creative tools, you still need to figure out how to do things through experimentation, trial, and error.

Which isn’t a bad thing! Experimentation can be invigorating when there isn’t constant interruption, or even the burden of expectation. It’s still impressive what players who push through and learn the tools can accomplish. One of the first options available to the community in LBP3 is a really excellent puzzle game that riffs on Dead Space, and it just nails the tone and style of that game. Stop telling me how special I am, Stephen Fry, and let me try to make my own stage for a sock bird already!

After seven years, with myriad studios steering the ship in different directions, LittleBigPlanet 3 feels torn between wanting to be a toolbox and a colorful little platformer. If it wants to just be a platformer, it needs to think bigger and expand what it lets you play with. And if it wants to just be a toolbox, it needs to either think of a better way to teach how to use those tools or stop breathing so hard down the player’s neck.

This game was reviewed on a PlayStation 4 using a disc provided by Sony.

The best PS5 exclusives
Razer’s 5G-enabled handheld gaming system is getting a public release
Fortnite Chapter 3 guide: All week 1 quests and how to complete them
The best special weapons in Splatoon 3
FIFA 23 beginners’ guide: Tips and tricks to level up your soccer skills
Return to Monkey Island: How to get all the golden keys
This wireless workaround will give your Google Stadia controller new life
The best Cyberpunk 2077 mods
Ubisoft and more offer ways to play purchased Google Stadia games elsewhere
‘Wordle’ today, October 1: Answer, hints, and help for word of the day (#469)
The best RPGs for PS5
Best board games 2022: For adults, families, two players, and more
The best PS5 games for 2022