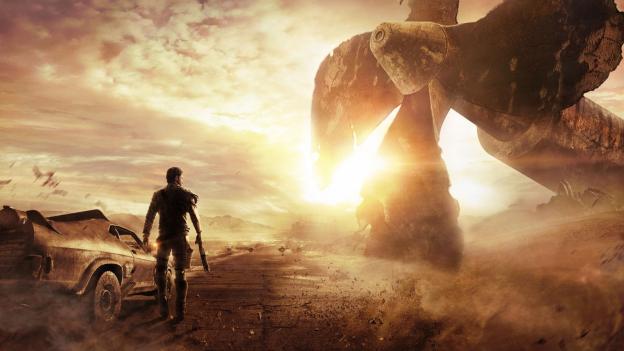 Mad Max really is a perfect fit for Avalanche Studios. Vast open worlds are something of a trademark for the Just Cause developer, and it’s clear after just 15 minutes watching the game at E3 that the developer is excited.

Why wouldn’t they be? Our last visit to George Miller’s imaginative post-apocalypse was 1985’s Mad Max Beyond Thunderdome. Sure, nothing in cinema will ever top the incredible sight of that movie’s Tina Turner as a she-warrior bandit overlord, but there’s a rich fiction to be explored here. And it’s one that studio co-founder and chief creative office Christofer Sundberg intends to leave a personal mark on.

“We have approached the development of Mad Max completely as if it was an original IP,” Sundberg explains. “We want to create a game franchise [for] Mad Max, and that’s exactly how we approached it.”

Miller’s creation is set to return to theaters in 2014 as Mad Max: Fury Road, with young up-and-comer Tom Hardy in the title role. Sundberg is careful to point out that the Avalanche game is an in-universe story rather than a direct tie-in. “I think the term ‘movie game’ has got a really bad reputation,” he says. “What the Rocksteady guys did with Batman just completely turned that around. They [developed] a licensed game with high quality that reaps really high scores.”

“That’s how we have approached Mad Max. Everything is completely new and original.”

The drive to realize Mad Max through the lens of an Avalanche Studios production is a principal focus for lead level designer Andreas Gschwari. The game is currently in a pre-alpha state, though you’d never know it when you see the E3 demo in motion. Gschwari readily admits that many elements are still subject to change, but quickly adds that much of what’s concrete springs directly from the core themes in Miller’s work – resource management, for example.

The Wasteland is a harsh place, and a desolate one. Long-distance travel requires a reliable vehicle, and a chief component of ensuring that reliability is gasoline. “It factors into the game quite hugely,” Gschwari says. “A large part of the gameplay element involves scavenging the Wasteland for various different resources, both to upgrade your car as well as other gameplay mechanics which we can’t really talk about at this point. Gathering… gasoline is quite a large part of the core gameplay mechanic that we have.”

For Max specifically, the Avalanche teams also places great emphasis on giving players a ride to invest in. That’s where the Magnum Opus comes in, a cobbled-together post-world muscle car that serves as your most flexible mode of transportation in the game. The Wasteland is home to more than 50 different rides that you can potentially hop behind the wheel of, but the Magnum Opus and its hunched over hobgoblin of a mechanic, Chumbucket, is by design, the most useful.

“The core story of the game is the player getting the Magnum Opus, aligning himself with Chumbucket and then together they build that ultimate Wasteland war machine,” Gschwari says. “Our aim is for the player to feel an attachment to the car. This is my car and I’m building it exactly the way I want it. So I want a really fast car with a couple of weapons, you build that. Or I want a ramming machine that just bursts through everything, I build that.”

The way you set up your car can (and likely will) change over time, both to suit different situations and to allow for risk-free experimentation. “It’s mix-and-match,” Gschwari says. “So if the player goes for all-out ramming and heavy armor early on, and then feels like ‘That doesn’t really suit me. I want to get out into the rugged terrain, I want to explore that open world,’ then he can go back and fix that.”

The particulars of how this will work are still in flux. Gschwari expects there to be a material cost (both in hard resources and in the time you’ll spend scavenging) for changing up the Magnum Opus, but, as he puts it, “the player is incentivized to try things out. There is no real unlock system for the upgrades. Some… will be unlocked at the story progresses because you’ll be meeting characters that help you, or Chumbucket will need certain parts that you need to get throughout the world.”

Upgrades are a big part of what makes the Magnum Opus special. The enhancements you apply offer a number of advantages, but there’s always a cost/benefit analysis, such as heavier armor reducing maneuverability. Even your trusty mechanic qualifies as “upgradeable.”

“Mad Max is like the mother of all post-apocalyptic IPs, so this is a dream come true.”

“Chumbucket is the mechanic of the vehicle [and] we’ve kind of integrated him as being part of the vehicle package, part of the upgrade package,” Gschwari explains. “You obviously can’t upgrade Chumbucket with a piece of armor and all that, but he’s the trusted mechanic. So whenever you get out of the car or whenever the car is damaged, he will jump straight onto the bonnet and start fixing the car,” Gschwari says.

“There’ll be different tools he gets that affect the quality of repairs as well as the speed of the repairs. There’s some other things that Chumbucket will do as the game progresses. As for the [weapon upgrades], there is quite a few. The sniper rifle is on that list, so you can upgrade that as the game progresses as well. [It’s] specifically tied to the car, same as the harpoon.”

[Author’s note: For more on the game’s upgrade mechanics, and other features, check out our E3 preview.]

These core tenets of Miller’s Max-verse fit well with Avalanche’s own style and approach. Look no further than the rich environment of Just Cause 2 for an example. “We provide massive outdoor open worlds, and we provide the gameplay density that fits that map,” Gschwari says. “What we don’t want to do… is create an open world where there’s nothing to do.”

“[One such optional diversion is] High-Value Cars,” he continues. “There’ll be some cars in the world which will be more high-value than others. They’ll be prized possessions. They won’t necessarily be the equivalent of the Magnum Opus that you’re building yourself, but they will be prized possessions of some of the characters in the world. Gathering those and getting them stripped down will add considerable resources to your junk pile.”

“Some of the other activities that we’ve planned for you: fuel is a very valuable commodity. So you go into some enemy locations specifically to get these resources. One other part is what we call “Threat.” A particular class of enemy presents a certain threat to Max’s purpose within the world, so going in there and eliminating those will reduce that threat to you.”

“The game has been in production for about 18 months, but we started talking to Warner Bros. quite a few years ago”

Gschwari is intentionally evasive when it comes to running through specifics, and it’s hard to blame him. Much can change as a game moves from pre-alpha to final release. The target release for Mad Max is 2014, so it’s early days of development, relatively speaking, even if Avalanche is already years in on the project.

“The game has been in production for about 18 months, but we started talking to Warner Bros. quite a few years ago,” Sundberg says. “We were about eight months away from finishing up Just Cause 2. It was a very good time to find a new project. We had just gone through a really tough phase with the studio and we talked to Warner Bros. about Mad Max. It was just a perfect fit for the studio. Just Cause is about cars and explosions, and we have cars and explosions here. So we could evolve that for this game.”

Avalanche sold its dream to Warner with a playable pitch demo, a first for the studio. “We’ve never done that. We’re cheap, we don’t want to spend any money on stuff like that,” he explains, chuckling. “But in this case, we were just so excited to be able to work on this. We have wanted to do a post-apocalyptic game for so many years. We’ve pitched different types of concepts that were quite similar to what we do, but they were rejected. We had sort of given up. And then this opportunity came along. Mad Max is like the mother of all post-apocalyptic IPs, so this is a dream come true.”

Sundberg admits he would love to show off that early pitch demo at some point, just to offer up a comparison of where the game was at its inception in 2009 and how little has changed at the core between then and now. “The tone and everything was right there,” Sundberg says. “We worked on a few post-apocalyptic concepts [previously], so that mindset of having a limited amount of materials, water and stuff like that, is something we’ve talked a lot about.”

Laid on top of that is the Avalanche identity, the same one that made Just Cause and Just Cause 2 so successful, and the same one that you see immediately when you sit down and watch the developer’s E3 demo for Mad Max. “I wrote Just Cause, the original. That’s very tongue-in-cheek. With Mad Max, it’s certainly 1,000 times darker. It’s a really, really mature game [but] it’s definitely got that over-the-top action,” Sundberg says.

“It’s sort of our trademark. My approach to every IP is, we shouldn’t even need to have a logo in our games. You should be able to look at an Avalanche game and see that it’s an Avalanche game. So I think we have achieved that. What we showed here is just a fragment of all the craziness that will go on in the game.”