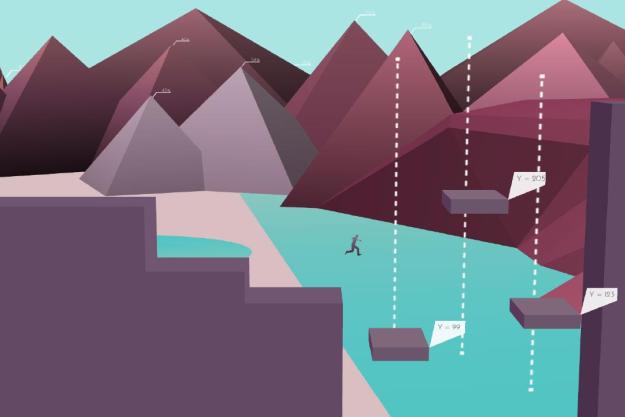 “Metrico uses the PS Vita's hardware features in inventive and challenging ways that past games on the system never dreamed of.”

If you’ve played one puzzle-platformer, you’ve played them all. At least that’s how it feels sometimes, and you’ll probably be OK if you never have to drag another box across the ground to get to a higher ledge, or flip a switch to flood an area with water so a platform can float within reach. Thankfully, Metrico is not one of those games.

The core concept is simple: Metrico is a puzzle-platformer in which the levels reflect the very metrics of your play. That means barriers rise or fall when you jump or die, or platforms move from side-to-side as you shoot or kill or simply run around. The environment reacts to your every action, and the trick is determining exactly how. Every puzzle is different, and by the end you’ll be forced to use all of the many tools at your disposal to solve them.

Metrico is a puzzle-platformer in which the levels reflect the very metrics of your play.

There are some incredibly inventive mechanics at play here, thanks in no small part to developer Digital Dreams’ use of the PS Vita’s unique hardware features. The game takes advantage of the system’s motion sensors and camera to great effect. Not just for novelty purposes, but also in ways that add to the experience and make each challenge feel distinctive.

New ideas roll out gradually as you progress through Metrico‘s six levels. By the end, you’re able to jump, aim and shoot small projectiles, warp around to different checkpoints, move platforms with the Vita’s accelerometer, wipe a puzzle clean by holding a button, and open the system’s camera to let in light and colors. One puzzle requires you to simply put the Vita down on a flat surface for several moments.

All of these actions and more affect various aspects of each puzzle, from where platforms are located to when enemies spawn. Numerical indicators next to each point of interaction always quantify the impact of your movements and actions on the game world. You’ll see that number rise and fall as the environment shifts, which helps to both call attention to how you’re reshaping a level and provide a measure of each change.

The Vita’s six axes of motion can all be used to move certain objects in various directions. There are points where you’re spinning the handheld around between your hands while trying to hold a button down—do this over a pillow in case you drop it. In the final puzzles, you have to show the Vita’s camera specific colors to progress.

The later puzzles ratchet up the difficulty by combining new mechanics with all those that were introduced before. There may be a dozen different moving parts in a single puzzle later on in the game, and it’s pure bliss figuring out the correct sequence of actions you need to take to move them into the exact right positions. On the other hand, these can get so complicated that you may skip the thrill of deductive reasoning in favor of a more frustrating trial and error process.

For all of the inventive approaches to control and interaction, Metrico doesn’t use the Vita’s touchscreen and rear touchpad very well. You drag a finger along the back of the device to aim and tap the screen to shoot. But shooting is also mapped to the triggers. It would have been nice to see a similarly analog option for targeting that uses the Vita’s right thumbstick, but there unfortunately isn’t one.

It looks like a Salvador Dali nightmare about math homework.

Metrico is not a long game, taking four or five hours at most to complete. But honestly, that’s fine. New ideas are introduced frequently, and difficulty grows in the way new ideas are built on top of old ones. By the time it’s over, you’ll welcome the respite from Metrico’s brain-busting puzzles. That is if you even reach the end—a few puzzles veer dangerously close to being too obtuse, and not just toward the end, either. You’ll likely have to strong-arm or dumb luck your way through a few, and that can turn some players off.

Metrico’s colorful, dream-like and geometric world helps to keep things interesting. It looks like a Salvador Dali nightmare about math homework. Each level dissolves into graph paper when you reach its end. Pyramids and other shapes float by in the background, purple and red and blue, their geometric figures waxing and waning as your little nameless silhouette avatar runs around, jumping and dying and killing.

The soundtrack, by a Dutch electronic music composer named Palmbomen, pounds out the perfect mood: determined, but unhurried. This unified aesthetic meshes perfectly with Metrico‘s gameplay, though the subway map of a level select screen doesn’t quite fit (and is ironically difficult to navigate anyway).

It’s great to see a game that actually uses the unique features of the hardware it’s on. Granted, the mere fact that a game wouldn’t be possible on other platforms doesn’t make it inherently good. But Metrico is more than inventive and challenging enough to sustain your interest until the end, provided you’re willing to muscle past a few unintuitive puzzles to get there.

This game was reviewed on a PlayStation Vita using a copy provided by the developer.

Check out some of our other recent reviews: