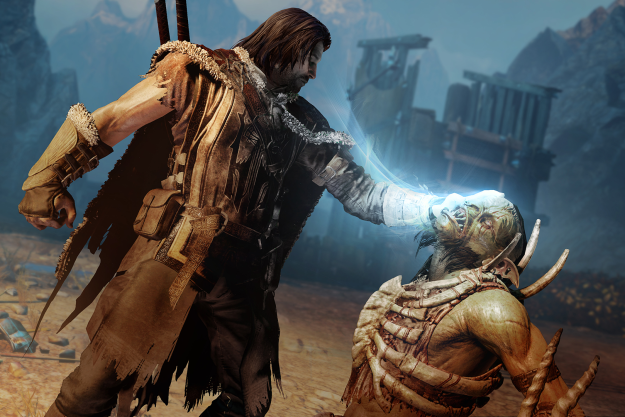 “Middle-earth: Shadow of Mordor nears perfection, but the demands of a scripted narrative work against its freeform structure.”

We all want to be storytellers. It’s a basic human impulse, to share tales of grand adventures with willing listeners. Specific moments in time come and go so quickly, but we find ways to keep them alive in the way we recount our most meaningful experiences.

Middle-earth: Shadow of Mordor is the rare video game that breeds stories. Your actions – and occasional inaction – influence the malleable hierarchy of Sauron’s army. If you assassinate a key Warchief’s most powerful Captain, that’s one less heavy you have to worry about when you take on the big boss. Or maybe said Captain escaped your blade once before, and you respect that canniness enough to bring him over to your cause?

Middle-earth: Shadow of Mordor is the rare video game that breeds stories.

Even for devoted Tolkien fans, the overarching plot in Shadow of Mordor is a significant lore dive, digging deep into a period of Middle-earth history that is only explored in the book The Silmarillion. A resurrected ranger named Talion, with the help of Celebrimbor, a long-dead elf-turned-wraith, seeks vengeance in Sauron’s kingdom. Don’t worry, it is absolutely inconsequential for more casual fans. The bigger attraction will be an open world populated with a living community.

Thank the Nemesis System, which defines Mordor‘s social stratum. Nemesis lays out the strengths, weaknesses, fears, and hates of key individuals serving in Sauron’s army. It also manages rivalries between these individuals and tracks Talion’s connection with each one. If a Captain cuts you down, he’ll be marked in the menus as a potential revenge target and – more importantly – he’ll use your next encounter to pepper you with insults.

More than just a throwaway feature bullet point, Nemesis progresses the plot. Talion and Celebrimbor have similar reasons for seeking vengeance in the land of Mordor, but Sauron’s forces are far too entrenched for a one-versus-many approach to an all-out assault. Your path to victory is shrouded in shadow and deceit. You need to ally with locals, then use your not-insignificant stealth and combat abilities to let your followers rise through the ranks on the backs of their enemies.

More than that, though, Nemesis seeps into your own thought process as you play. Say the basic goal of unseating five ruling Warchiefs is laid before you. In most games, that would mean taking on a series of five “bosses,” maybe with some optional sidequests peppered in to give you an advantage in one fight or another.

Shadow of Mordor is more organic than that. You’re not going after some generic boss. That’s Amug the Sickly, who was just a basic grunt in Sauron’s army until he landed a lucky strike one day that cut down the great ranger Talion. He was elevated to Captain then and there, and he eventually, through successful power struggles with other orcs, climbed to the rank of Warchief. He’s terrified of Caragors, four-legged carnivores that roam free in Mordor, but he can’t be harmed by ranged attacks. He’s an individual.

You remember Amug well, and you don’t like him one bit. You do, however, have a grudging respect for his lone Captain follower, Mugluk the Cook. Talion scrapped with Mugluk once before in a one-on-one fight, but the orc slipped away. Where Amug just got lucky, Mugluk showed wisdom in battle, retreating from a superior foe. He’d be a good fit for Warchief, especially after you use Talion’s Brand ability to bring him over to your side. And so you send Mugluk off to duel with his boss, Amug. And, when the higher-ranking orc is sufficiently weakened, you can step in and finish the job. Or let Mugluk do it, if you prefer.

This entire narrative unfolds in the mind of the player. It’s not something scripted into the game, it’s a story that emerges out of your own, unique experiences. And it’s astonishingly powerful. For the better part of Shadow of Mordor‘s running time, you’re working the social hierarchy of Sauron’s forces in a way that would make Niccolo Machiavelli proud.

Nemesis lays out the strengths, weaknesses, fears, and hates of key individuals serving in Sauron’s army.

Wrapped around all of that is a third-person, open-world adventure that’s colored in shades of both the Assassin’s Creed and Batman: Arkham series’. The former influences Mordor‘s stealth and movement; Talion can scramble his way up nearly any vertical surface and he can sneak around hostile territory in plain sight by using his Wraith sense to see all nearby enemies, even through walls.

Stealth is a potent asset when used in concert with the Branding ability, which unlocks roughly halfway through Shadow of Mordor. From the lowliest grunt to the most powerful Warchief, any enemy in the game can be recruited to fight alongside Talion. More than that, Branded orcs remain that way indefinitely. You might spend an hour converting an entire fortress worth of orcs to your side, only to return there later on the hunt for a Warchief. With one press of a button, all of your supporters are “activated” and go on the attack.

Combat is where the Arkham influence comes in, with combo-and-counter mechanics and hit streak-dictated power moves that basically ape Rocksteady’s Batman games. That’s not a bad thing. Talion feels powerful from the outset, and that feeling only grows as he levels up and unlocks new abilities over the course of the story.

Split into two visually distinct regions, each with their own Nemesis-influenced power structure, Mordor’s open world always has a wealth of things to do. Story missions propel the larger narrative forward with scripted encounters and quests. Outcast missions give you a chance to free some of the human slaves trapped in Mordor, and nab bonus XP, Mirian (Mordor‘s currency), and intel about Sauron’s forces.

That’s not all. Completing Weapon Challenges fleshes out the story for Talion’s sword, dagger, and bow, all of which have names in typical Lord of the Rings fashion. Captains roam free throughout the world, an element of randomness that gives way to unexpected miniboss encounters, even during other, unrelated missions. Forge Towers can be scaled and interacted with to reveal more of the map. And there are collectibles galore, to really encourage thorough exploration.

For everything that works in Shadow of Mordor, the game doesn’t quite come together perfectly. Talion is an agile ranger, but the controls often feel sluggish and unreliable when climbing or maneuvering around in a crowded combat encounter. Noticeable slowdown doesn’t help in the latter circumstance. Lord of the Rings may be known for its thousands-strong battles, but Shadow of Mordor‘s frame rate dips well below 30 fps whenever more than a dozen or so orcs face off against Talion.

One frustrating glitch allows defeated Captains and Warchiefs to escape; you can give chase, but the target literally disappears from the map once he crosses an invisible line, whether or not you have a line of sight. A break like that effectively shatters the illusion of a living society that Mordor otherwise so effectively creates.

The worst offender, however, is the story itself. The free spirit of Nemesis clashes with the scripted narrative that guides Talion’s journey. It’s not a spoiler to say that there’s a big showdown at the end, but the merging of the underlying revenge quest with the personal narrative each player constructs feels downright awkward. It’s not a fitting send-off for a game that so effectively leaves every player with so many unique stories to tell.

That’s the thing, though: The personal experiences enabled by the Nemesis System trumps all. You’ll sigh loudly every time an escaping Captain winks out of existence, only to resurface moments later halfway across the open world. But that’s not what you talk about when you tell your friends about that time you finally bested Hork the Cook by sending a rival Captain after him and shoving a blade between his ribs while he was in combat.

We all want to be storytellers, and Middle-earth: Shadow of Mordor effectively weaves those individual stories.