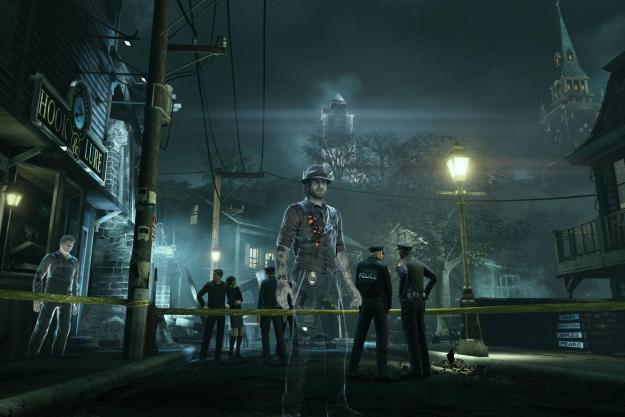 “Murdered: Soul Suspect takes the clever premise of a ghost detective, and sabotages it with a protagonist as thin and dull as his ethereal specter.”

Detective stories are a dangerous gambit in video games. If a game can draw believable characters and suck you into their story, unraveling a mystery in their world can be a satisfying experience. If it can’t, you’re just going through the motions.

Murdered: Soul Suspect falls into the latter category. It has the muscles of a great video game detective story, but lacks all the vital tendons and sinews to link its lead’s discoveries to the player’s experience. No detective story succeeds when the audience feels smart and the hardboiled gumshoe comes off like a blithering moron.

Airtight Games’ supernatural whodunit has many problems, both conceptual and mechanical, but they’re all secondary to the fact that ghostly detective Ronan O’Connor is a void, and not just because you can literally see through him.

That’s no spoiler, mind you. Ronan’s ghostified in the opening moments of the game. The Salem, Massachusetts detective is hot on the trail of the Bell Killer, a serial murderer plaguing the famous city. Following up on a lead without back up, the killer tosses Ronan out a window before shooting him seven times, marking his spirit with seven glowing bullet holes.

Soul Suspect peaks right out the gate, suggesting a wildly different game than the one that follows by hinting at a more meaningful character. Controlling Ronan’s spirit, you struggle vainly to fit him back into his body, which is riddled with tattoos marking his youth as a criminal. Ronan then has to investigate his very own murder, but only after meeting the ghost of his dead wife, who pleads with him to fulfill one last duty and make his peace before he can be with her.

Were Murdered the story of redemption and acceptance hinted at in these opening moments, it might have been something special. Unfortunately, Ronan never develops further as a character. What’s his motivation? He wants to be with his wife. Why? Because the game said so.

The hardboiled gumshoe comes off like a blithering moron.

With every examined piece of evidence, whenever he meets another ghost in need of help on the road, or even when he speaks with the teenage psychic Joy that becomes his partner and link to the living world, Ronan never has a real revelation. Even the inexplicably scattered pages of his wife’s diary you pick up are stray collectibles that do little to illuminate their relationship. Joy, who the Bell Killer was hunting when Ronan was killed, is no different. She and Ronan never develop a meaningful bond as the detective tries to help her find her missing mother in the course of tracking down the game’s serial killer.

Murdered is actually rigidly set into seven levels, which you travel between through the hub of Salem proper. First comes the investigation. A counter appears in the bottom of the screen telling you that there are a set number of clues in the area. Already the game is giving up the ghost by telling you the limits of your investigation before you start; the mystery is diluted. Ronan then has to go into a menu to connect significant evidence to complete the investigation.

Problem is, the game also tells you when evidence is significant. Meaningless evidence, like examining an ancient ship anchor in Salem museum, will just bring up a flash of text on the screen. Meaningful evidence meanwhile will be followed by a full on cutscene flashing back to how it relates to the murderer, or flash to Ronan’s thoughts, like the memory of missing girl running through a wedding photo shoot.

Murdered freezes the action while you select words on the screen to describe what’s happening. Your choices are “happy,” “scared,” “hiding” or “fleeing.” It’s never difficult to make the right choice. With no shades of grey in the choices or action, picking the obvious bits is all the game offers. When finishing the investigation, rather than reveal his personal feelings or some other insight, Ronan just repeats what you already know. “The Bell Killer is targeting young women!” exclaims Ronan, the detective who’s been tracking the murderer for weeks already, has a war room at the police station devoted to it, and who also knows the teenage girl already hunted. Duh, Ronan.

When not investigating, Murdered attempts to spice things up with some light environmental trickery. Being a ghost, Ronan can walk through some objects, but can’t enter buildings unaided since they’re all consecrated. Problem is, architectural ghosts also haunt Salem. Psychic remnants of old buildings block his way, along with oily patches of lost souls that if touched can “kill” Ronan. Ghost structures actually provide Murdered’s best visual quirks. Wandering a nighttime city, and finding your way blocked by a translucent 17th century boat workshop poking out of an apartment building is certainly an unusual sight.

Ronan even has to pull a Patrick Swayze every now and again, causing poltergeist activity to distract people from seeing Joy as he leads her to certain investigation spots. Even these prove problematic, though. Enclosed spaces quickly become confusing, with ghost architecture obscuring proper paths. Meanwhile, if Joy isn’t around, Ronan can mess with every telephone, printer and soda machine in sight and the NPCs won’t care at all. Somehow, they only notice distractions if Joy’s nearby.

These dumb bits begin to pile up after a while. Why the hell is their a human skull just sitting in the air vent of a sanitarium for no good reason? Why do ghost crows distract wandering angry demons that can also eat Ronan’s soul? If this serial killer has been at large for so long, why is there still evidence strewn all over Salem? Nothing makes sense, and there’s little reason to care.

Sometimes, the optional content is actually richer than the main story. In every stage of the game are a series of hidden objects Ronan can find, like a collection of family crests in Salem’s cemeteries. Collecting all of one set will unlock a ghost story told through audio. These are genuinely fun, in an Unsolved Mysteries kind of way. There are also ghosts Ronan can help move on by investigating their deaths. A colonial woman lost on the beach, a drunk driver racked by guilt over possibly killing his friends; these figures you meet have Murdered‘s only truly human stories. Finding out what happened to them in optional investigations is as simple as everything else, but rewarding on its own.

How disappointing that it’s the stray little asides that are memorable, rather than the mystery and character the full game is hinged upon.

Everything we know about Redfall