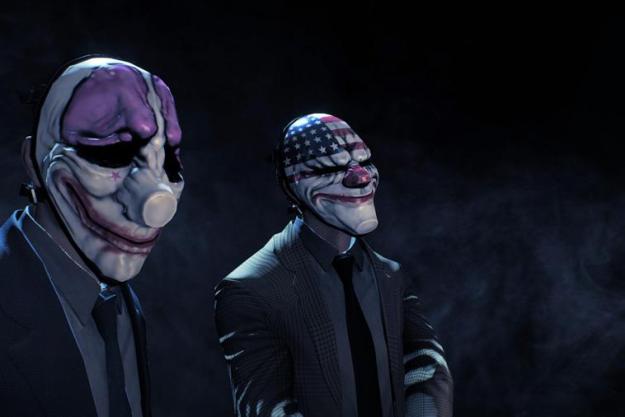 “Although it could perhaps have used a bit more time in development, Overkill Software delivers a satisfying co-op heist game in 'Payday 2'.”

A few scattered shrieks accompany the sound of shattering glass but, mercifully, there are no sirens. You hoist your shoulder-slung SMG behind you and quickly shovel jewelry into a nondescript satchel while your accomplices keep things together. One lingers in the back room, minding the drill as it bores through the thick door of a cube-shaped safe. Another stalks back and forth across the jewelry store, shouting at patrons to keep their heads down. The fourth in your group remains out front, running crowd control to prevent passing pedestrians from calling in the fuzz.

The stillness is suddenly broken when a police siren flares up in the distance. And it’s getting closer. Your headset connection to the crew explodes with chatter and shouts of blame. Someone screwed up. Maybe the cellphone-scrambling ECM jammer fried out? Or a lone pedestrian slipped away unnoticed? It doesn’t matter. The heat is incoming, and your heist just went tits up. All you and your crew can really do is secure the hostages, hunker down, and prepare for a siege.

Overkill Software delivered on the promise of a fun, co-op-driven steal-a-thon in 2011’s PS3/PC-only Payday: The Heist, and now Payday 2 comes along to evolve some of the earlier effort’s great ideas. This is a much larger endeavor, with the previous game’s loosely structured story discarded completely in favor of a more open-ended framework, which is built around a new mission selection interfacecalled Crime.net.

Crime.net is your portal into the co-op heisting world. Accessing it brings up a city map filled with an assortment of jobs, from single-day smash-and-grabs to elaborate, multi-day gigs. Each job is on a timer; once the timer zeroes out, that job is gone forever. New opportunities are constantly cycling in and out of the map. Each icon conveys basic info about the job: what its name is, how many days it lasts, what difficulty it’s set at, and how many players are currently in the lobby (if any).

The simplest heists are single day ventures, amounting to one “match” from the player’s perspective. Robbery is always on the agenda in some form, but objectives can range from making off with a set number of loot bags to destroying $50,000 worth of mall merchandise. Multi-day missions unfold over multiple, connected “matches,” all of which must be completed in order to receive the full reward.

You might spend 30 minutes or more stealthily setting yourself up for a job, only to lose all when you’re suddenly kicked from the game.

There’s roughly a dozen different job templates in all, though an element of randomness in Payday 2 helps to make even the most familiar robberies feel fresh. People, camera locations, and even map layouts change with each new playthrough. You could play the Jewelry Store smash-and-grab several times in a row, and still have to worry about checking alleys for blocked paths and back rooms for safes as you work to avoid raising alarms.

There’s a tremendous sense of satisfaction felt when you work successfully with your four-person crew to pull off a robbery without alerting anyone. Plenty of co-op games are out there that reward team play, but none quite match Payday 2’s thrill of keeping a crowd under control while you busy yourselves with stealing all of the money. You can always play with fewer than four, either filling out your team with AI allies or going in with a smaller crew, but most of the heists are designed with four human players in mind.

Money is a much more valuable commodity now than it was in the original game thanks to an entirely new system of unlocks. It starts with your four thieves: each one has a particular specialty that spreads out across a skill tree. Reaching a new tier of skills in each tree is a simple matter of spending a certain threshold of points in the tiers below it. Classes must improve separately, but once a skill is unlocked, it remains active (unless you respec) regardless of your loadout or character choice.

Skills are built around making your work on a given job easier. The Mastermind class is a silver-tongued fast-talker; he gets better at intimidating the rabble into not running off and doing his best “Han Solo ‘we’re all fine here, how are you?'” act when speaking into a downed guard’s pager. The Enforcer, on the other hand, brings brute strength that allows him to, say, throw loot bags much further than your average crook. The Technician and Ghost round out your crew, bringing along a love of explosives and a knack for electronics, respectively.

Then you’ve got your loadouts. Primary weapons, secondary weapons, outfits (bulletproof vests and the like), equipment, and masks can all be custom-selected before you step into a new job. Many of these unlock as your XP level rises, though some – notably weapon attachments and masks/mask customization items – only come from random Payday rewards that all players receive at the end of any successful job.

There’s a tremendous sense of satisfaction felt when you work successfully with your four-person crew.

All of this, whether it’s equipping a new weapon, fitting a new attachment, painting your mask, or assigning skill points, costs money. You can respec your skills within a given tree whenever you’d like, but you’ll want to have a hefty supply of cash on hand before you do so. Same goes for attachments; you might prefer to take the silencer off your pistol before a mission that won’t require it, but you’ll have to pay up again later if you want to re-attach it.

Through this, Payday 2 effectively reinforces your endless pursuit of the almighty dollar. Cash is always the resource that you could use more of. Most of your take from a successful job is stashed away in an offshore account that you can’t ever touch – think of it as your high score – so your spending cash tends to dwindle quickly unless you’re careful about saving.

Payday 2 is a tremendous game with a lot of clever ideas built around supporting co-op play, but it’s not nearly as polished as it should be. The user interface is woefully lacking on the Crime.net side; a basic filter allows you to see if friends are playing, but there’s no way to restrict your search to just one job template or difficulty. There’s also no tutorial, a woeful oversight for such a complex game. Contextual command pop-ups help matters, but prepare for a learning curve.

The netcode for both the PC and Xbox 360 versions is lacking as well. Load times are excessively lengthy, especially on the console side. Dropped connections occur semi-frequently, even after a launch day patch was released. You might spend 30 minutes or more stealthily setting yourself up for a job, only to lose all when you’re suddenly kicked from the game. The patch seems to have cleaned things up considerably, but the stability issues are worth noting.

Payday 2 also offers a Crime.net Offline mode that allows you to take on any job using bot accomplices rather than humans. Unfortunately, someone seems to have forgotten to program the INTELLIGENCE portion of the friendly AI. They’ll follow you around and shoot back at things, but they won’t pick up loot bags or tie hostages or anything like that. It’s so bad that Crime.net Offline is effectively broken in its current form; most missions are rendered virtually impossible thanks to your useless teammates.

There are also some platform-specific oddities. The Xbox 360 version is just graphically inferior, simple as that. Perhaps it’s a result of just how much number-crunching is being done while you’re playing with all of the random elements, but it’s a surprisingly ugly late-gen console release, at least on Xbox 360.

The PC version, on the other hand, is strangely schizophrenic in the way its controls are set up. There’s no way to switch between keyboard and gamepad controls in-game; you’re stuck with whichever one you start with until you back out to the desktop and reload. The gamepad works well enough in the game, but using it means you sacrifice your ability to use Payday 2’s text chat.

Issues like these can and hopefully will be addressed in time, via patches. Nonetheless, all of it contributes to the less-than-polished feel that you get when you fire up the game for the first time. Especially when you see features like the Safe House, a home base that you can visit between jobs and that you’ll eventually – not yet, but at some unspecified point in the future – be able to customize.

Where to Buy: Amazon

Payday 2 is a tremendously entertaining game when you find yourself in a lobby with three other mic-equipped, communication-friendly players. Overkill expands on its original concept with some terrific new ideas and an overall expansion of what we saw before. The technical shortcomings are mostly minor, but they are undeniably numerous. You’ll overlook them if you love co-op games and have a group to play with, but it’s going to take some patching before Payday 2 can truly be considered “polished.”

The best Xbox Series X headsets
The best PS5 headsets
The best multiplayer games on Nintendo Switch
The best Call of Duty: Warzone 2.0 weapons for Season 1
GameStop Cyber Monday Deal: Buy 2 Get 1 on all preowned Xbox One and PS4 games
Starship Troopers: Extermination turns sci-fi satire into a co-op shooter
Score $90 off an Alienware gaming chair for Cyber Monday
How to get Battle Tokens in Warzone 2.0
How to redeem Mystery Gifts in Pokémon Scarlet and Violet
Call of Duty: Warzone 2.0 desperately needs to give players more health
Don’t miss this Xbox Series S Cyber Monday deal — ends midnight
Now’s the perfect time to stock up on PS5 controllers
How to evolve Tandemaus into Maushold in Pokémon Scarlet and Violet