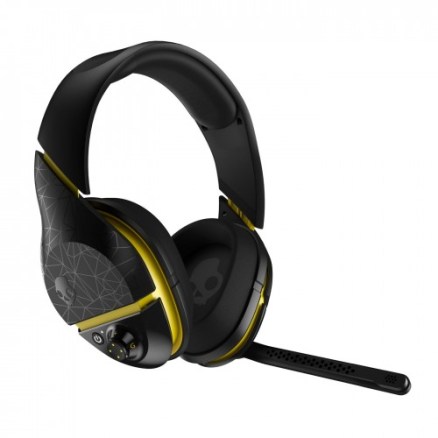 Given that Skull Candy’s demographic is younger and hipper than your average audiophile, gaming headgear is a logical avenue for it to be exploring. Yesterday represented a big step for the company in that arena as it announced the launch of its first-ever wireless gaming headset: the Plyr 2. A release sent out earlier this year suggested that gamers would be able to procure the set by the 2012 holiday season, and it now looks like they’ll be powering on just as expected.

Plyr 2 is said to present a versatile option to gamers, and is compatible with Xbox, Playstation, PC, and Mac. Skullcandy’s cheeky term for this sort of diversity is “platform agnostic,” but that does look a bit like an Xbox joystick on the ear pad, doesn’t it?

The new headset features 2.4Ghz wireless technology, a boom mic that mutes when flipped up, and three  EQ modes labeled as bass, supreme, and precision.

Skullcandy has had a bit of a checkered past with respect to gaming headsets (their initial effort, the 2009 GI series wasn’t very well received), but, after purchasing head-set afficianado Astro Gaming last year, it looks like they’re on track to step up and compete in the arena.

The Plyr 2 headset is available now in black, white, and teal, and retails for $130.