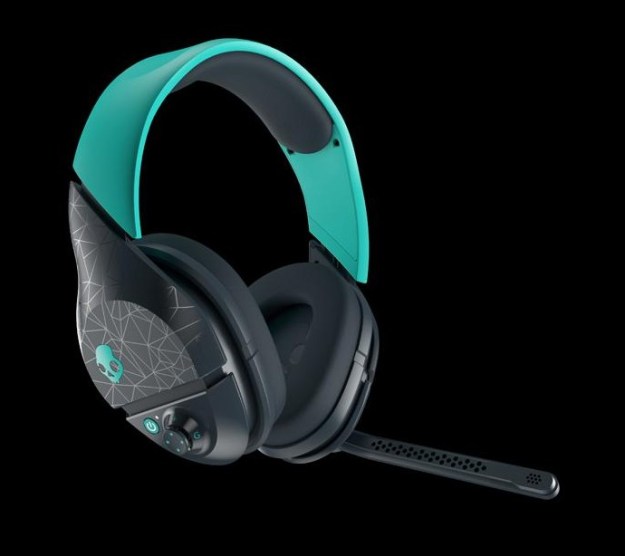 Skullcandy is an audio company with a young demographic and a modern, hip visual style. Given that M.O., yesterday’s announcement that it will release a new line of gaming headgear doesn’t come as much of a surprise — but there’s more to the story than that. More on that in a moment. First, here’s the dish on the new gear.

Three new headsets have been tendered: available now is the Skullcandy SLYR (slayer)- a wired, stereo headset which is retailing for $80. Features include a stashable microphone, inline audio mixer and 3 EQ presets.

Two wireless iterations are also on the way. The  PLYR2 and PLYR1 will power on for the 2012 holiday season and early 2013 respectively. Both PLYR models feature 2.4Ghz wireless technology, while PLYR1 will also boast Dolby 7.1 Surround Sound. The PLYR2 is expected to run $130 while the PLYR1 (always more coveted) headset will be the priciest at $180. All three are compatible with Xbox 360, Playstation 3 and PC.

For those less than impressed that Skullcandy is taking a shot at the gaming market, we understand. But we think you should know that some major changes have recently taken place that put Skullcandy in a very good position to grab a big chunk of this market.

Skullcandy has dipped its toe into the gaming headset pool before. In late 2009, it released the GI series of gaming headphones, which were met with a lukewarm response at best. By the company’s own admission, these were little more than its existing GI headphone line with a microphone slapped on them. Why then, should we expect Skullcandy’s three new offerings to be any different?

In April of 2011, Skullcandy bought Astro Gaming, a company lauded for its high-performance, ultra-premium gaming headsets. Prior to the merger, the two companies could not have been further apart in terms of the public’s perception. But now that the two have joined forces, things have changed dramatically inside corporate headquarters, and it’s a safe bet we will see some sweeping changes in Skullcandy’s new gaming products as a result.

Founded in 1994, Astro Studios quickly made a name for itself among gamers looking for high-end headsets. In 2008, Astro became the official headset provider of Major League Gaming, and its product line has grown. The last few years have not been quite as kind though, and the lucrative and high profile MLG license has since changed hands to Turtle Beach. But if the acquisition plays out as hoped, it could alter the landscape of gaming peripherals.

We spoke with Gernard Feril, category manager for Skullcandy gaming, who shed some light on why the company decided to get into gaming headsets in the first place and how things have changed internally since then.

And that’s exactly what happened. Skullcandy had built a big name for itself, and now it was time to dig deep into product development. The process had already begun, but as Feri describes it, his product development team started small, then exploded.

“In the year 2010, before I joined, there were about eight of us in the product development team. By early 2011, there were close to 30 of us.” Feril stated.

Skullcandy had built itself a who’s who of mechanical, electrical, and acoustical engineers. It even brought on the former “golden ear” from Bose as head of R&D and acoustics. Then, two short months later, Astro’s wealth of development resources were suddenly available. That’s when Skullcandy started work on the three new headsets it has just announced, which benefit from a blend of its own development efforts along with technology trickled down from Astro’s well-regarded products.

We’ll wait for our sample of the SLYR headphones to arrive before we pass judgement on how effective this strategy has been, but all signs point to the fact that Skullcandy could become a force to be reckoned with in the gaming headset market.