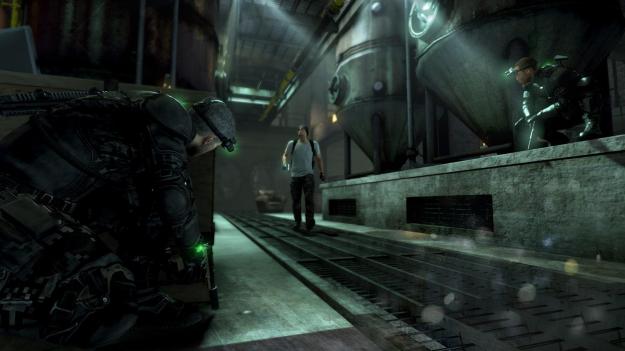 When Splinter Cell: Blacklist releases on August 20, it will unsurprisingly include both co-op and competitive multiplayer modes – but with its own unique twist.

Splinter Cell has always had an original slant when it comes to the multiplayer, especially the competitive mode. Rather than having a traditional adversarial match-up with two equal teams trying to hunt each other down for a bit of good old-fashioned violence, Ubisoft tries for something that revolves around tactics and teamwork. Two very different teams compete: one is based on stealth, and the other is a standard gun-toting grunt played from a first-person perspective. It is a game of cat and mouse, with guns competing against gadgets. It plays like nothing else, and a relatively small yet passionate fanbase grew around it.

The traditional multiplayer model found in most games continues to be emulated because it works for the widest potential fanbase. That doesn’t necessarily make it the best approach for every game though; the more games that use it, the greater the chance for exhaustion. That’s where Blacklist‘s “Spies vs. Mercs” has a chance to catch on with new players.

The signature competitive multiplayer has been revamped and updated in Blacklist, and the result a more accessible game type than ever before for the series. It is also joined by a co-op mode that is both an extension of the main story, as well as a story unto itself. Both multiplayer modes are there to extend the life of Blacklist, and both offer something that you won’t see anywhere else.

The co-op mode in Blacklist is accessed through the game itself, and it is sewn into the main plot. While Sam Fisher and Fourth Echelon hunt for the mysterious “Engineers,” you will be presented with 14 unique missions presented to you by four characters. These missions live on the Blacklist disc, though there is a good chance that more will be offered as DLC.

“The Fourth Echelon missions, which are the co-op missions – the side missions – those focus on multiple different things,” lead game designer Richard Carrillo told us. “Those are really building Fourth Echelon. So it’s a lot of narrative around your team, around what they are doing.”

Ubisoft briefly considered making the entire game co-op, but it was never more than a fleeting thought. It was ultimately decided that the game is about Sam Fisher, and the focus is on him. The co-op, on the other hand, is about the supporting cast of character that make up Sam’s new Fourth Echelon. There is a special focus in the game on the relationship between Sam and Briggs, his protege.

You access the co-op and competitive modes from inside the campaign. You can speak with the people on your team between missions, and they will fill you in on what else is going on in the world. You have the option of ignoring these side missions, but completing them gives you a much better understanding of the overall story. What’s more, each of the mission-givers have their own view of the world coloring the task at hand.

“Each character will be getting you to do their specific missions,” Carrillo said, “and those missions are tailored to that character.”

Briggs’ missions are the highlight though. You are given multiple ways to proceed, and your progress through these missions is framed around a narrative structure. Briggs is Sam’s protégé in the game. He appears often during the the campaign in a support capacity, as an AI-controlled character. In the co-op missions, his relationship with Sam is explored.

A recent Ubisoft demo in San Francisco showed off two co-op missions, and two styles of in-mission play. The first, a Briggs mission, sends the co-op partners up against the Indian military, with a non-lethal requirement through the first section. You can push through with a pacifist panther-style and leave unconscious bodies in your wake, or you can go completely ghost and sneak by everyone. The mission parameters soon change and you face a new enemy, one that you need to actively fight off. These missions are what the main campaign is going to be like as well, and it feels a bit like Conviction.

The second game type on display was a Grim mission. There was no requirement on how you approached it as long as the guards can’t raise an alarm; their doing so meant an instant fail. All co-op missions can also be played solo, but the missions are made for two and they require a lot of communication.

There will always be multiple ways to make it through an area, and different ways to earn points as well. You can stay together if you want to play it safe, but you’ll miss out on time bonuses and possibly other optional objectives. You can also move through unseen, like a ghost, or kill anyone in your way as long as the kill isn’t seen. These missions can be the toughest, but also the most rewarding.

It helps to have the right tools for the mission, and equipping the best gadgets and outfits makes a big difference. You can change this in the loadout before the missions, and you purchase new tools with credits earned in any of the game modes, whether it’s campaign, co-op, or multiplayer.

Ubisoft isn’t willing to talk about it yet, but there will likely be leaderboards as well. That on top of the multiple ways through each mission promises to offer a lot of replayability.

The “Spies vs Mercs” mode returns, fine-tuned and beefed up after skipping Conviction. Instead of the previous 2v2 liit, games will now be 4v4, which makes a huge difference. There are also new loadouts that you can select which change the way you play, and the spies can now kill mercs fairly easily under the right circumstances. Fans of the old style will be happy to know that the “classic” mode is also included as a separate mode, and plays much like the older “Spies vs Mercs,” down to the player limits. But the new take is likely what most will gravitate to.

The game is a four-on-four domination match, but with a unique slant. You begin by choosing the loadout you want as either a spy or a merc, and you switch sides in a single game so you’ll play both types. This isn’t the traditional competitive multiplayer where a single player can dominate; teamwork is essential. Each team should have at least one of each loadout. If you aren’t communicating effectively, you will lose to a team that is.

The goal of a match is to attack three points as the spies, or to defend them as mercs within a time limit (defaulted to 10 minutes). When a match begins, three terminals become active. A spy can then initiate a hack, which takes 100 seconds to complete. The spy that initiated the hack becomes the target, but if they die another spy can quickly restart the timer before it resets. Once the first terminal is hacked, the other two become available.

Choosing the right spy to hack and the right mercs to attack and defend will be key.

On the spies’ side, you have:

The mercs will have the following:

These six classes are the default, but as you earn credits you can unlock additional loadouts and customize them to your liking, though it takes a while to earn enough.

The two sides each play so differently that it is like jumping between two games with each round, keeping it fresh. Playing as a spy is a bit more interesting at first, mainly because it is something new. The Mercs side is fun because you can just slaughter the spies, making you feel like a bad ass. The flipside though is that as a spy you can use your stealth abilities to hid in the shadows and wait. Both are good in their own way, and once you get used to the spy side, you’ll see the two sides are surprisingly balanced. The spies may seem to have an advantage at first, but once you factor in the Mercs gadgets, it evens out.

The thing that makes this mode so addictive is the same thing that may turn people off: it requires teamwork. In most competitive multiplayer games that are successful, there is a huge number of players that play lone wolf. You can try that with Spies vs. Mercs, but it just isn’t as fun. There is a positive to this though.

Although this game mode has been around for awhile in the Splinter Cell series, it feels fresh. The changes make it more more accessible than the previous version’s was. Playing 2v2 made it tough for anyone that didn’t already have a friend to play with. Gamers can be sociable creatures, but they can also be the opposite. Not everyone is willing to be the first one to strike up a conversation with a stranger. With teams of four, that dynamic is different. It is easier, looser.

As the competitive multiplayer modes we’ve seen for years continue to churn out clones, “Spies vs. Mercs” could turn out to be something fresh – as long as people are willing to give it a try. It, combined with the co-op play of Blacklist, could give the new Splinter Cell a long life.