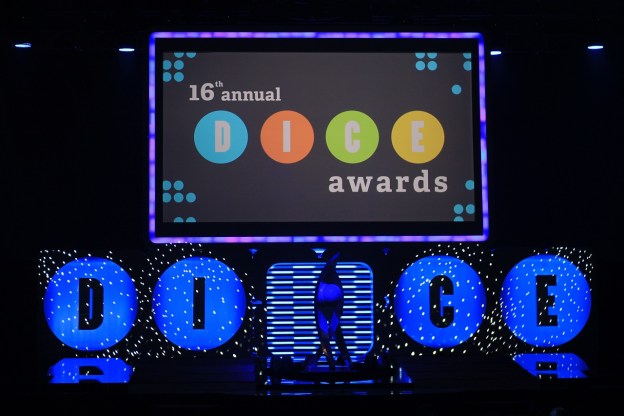 The D.I.C.E. Summit is not so different from Alice’s Wonderland for those who work outside the video game development community. The press can attend, see all the talks, maybe even score a handful of coveted interview slots. They’re development outsiders though, and this is a very inward-facing event. News items like the Bad Robot/Valve Corporation partnership and yearly Ouya hardware updates are the exception rather than the rule. You learn quickly as an outsider attendee that the focus is very much on developing a cross-disciplinary dialogue among those who create and design games.

Depending upon your disposition and level of interest in the ideas that drive the games we play, it’s either endlessly fascinating or hopelessly dry.

The foundation of D.I.C.E. is right there in the name: Design, Innovate, Communicate, Entertain. These four pillars are the backbone of the entire event, informing four keynote talks that are spaced out over the two days. An additional two keynotes, one each morning, lay out the bigger picture ideas. This year, both featured Valve’s Gabe Newell; he appeared first with J.J. Abrams to discuss the challenges of cross-media storytelling and then again by himself on day two, painting a picture of Valve’s corporate doctrine and hardware strategies.

What’s cool about D.I.C.E. that doesn’t necessarily come across when you watch videos of each talk is the atmosphere. Game development is a very insular activity, with teams often cutting themselves off from the community for years at a time as they toil in secret on the next project. It’s necessary in one sense when you’re talking about multi-year timelines. Hype and marketing are an unavoidably vital components of the industry: tip your hand too early, and you lock yourself into ideas that may have to change; show up too late, and you risk being overlooked entirely.

Given all of that, D.I.C.E. provides a yearly touchstone that allows developers to break out of their grind and think about the “Why?” behind what they do. The Newell/Abrams chat featured a newsy scoop, but the bulk of it focused on highlighting the differences between passive and interactive storytelling. The pair didn’t sit down to come up with a solution. In truth, there is none. In highlighting the points of departure between their two respective mediums, they addressed old questions and raised new ones. They served their peers some food for thought.

That’s the sort of thinking that drives this event. The Design keynote delivered by Sledgehammer Games’ Glen Schofield addressed one man’s sources of inspiration. A later talk, from Supergiant’s Amir Rao, considered the small studio’s attitude toward multi-platform development. Whether it’s one of the four main keynotes or the handful of related talks the fill out the rest of the two days, the process really boils down to a parade of extremely talented people offering some insight into their own process, both creative and technical. There’s nothing quite like it in the world of entertainment.

The event concludes with the annual D.I.C.E. Awards show, now in its 16th year. Spike’s VGA may be the biggest media circus when it comes to gaming award shows, but the D.I.C.E. Awards, curated and selected by the Academy of Interactive Arts and Sciences, is effectively gaming’s Oscars. Forget about sales, forget about popularity contests. If you want to get a sense of what the year’s favorite offerings were as chosen by those who create the games you play, this is it.

This year’s event was dominated by thagamecompany’s Journey, with eight wins in 11 nominated categories, including a big win for Game of the Year. Fan darling The Walking Dead trailed behind with half as many wins in eight nominated categories, including Adventure Game of the Year. Host Chris Hardwick emceed the festivities, displacing Jay Mohr as host for the first time since 2006. The show also saw Newell inducted into the AIAS Hall of Fame and Infocom founders Dave Lebling and Marc Blank presented with the Pioneer Award for their vital contributions to gaming’s development as a medium.

As with any awards show, there were some oddities. Despite the success of Journey, there’s a distinct lack of focus on the indie sector of the game development community among the nominees. The Adventure Game of the Year category is telling in this regard. The Walking Dead was a veritable shoe-in for the win there, but none of the admittedly high-profile competing nominees – Assassin’s Creed 3, Darksiders 2, Dishonored, and New Super Mario Bros. U – necessarily fit with traditional definitions of the adventure genre.

Hardwick too brought some unusual energy along with him. He’s certainly a more fitting host than Jay Mohr, and even those who aren’t familiar with his Nerdist podcast can quickly pick up on the fact that this is a guy who knows his geek trade. That said, it seemed like Hardwick was toeing a line all evening between paying respect to the development community and the culture of gamers that they speak to, and embracing the worst outsider stereotypes in his fun-poking at geek culture.

There’s a sense walking out of D.I.C.E. that 2012 was a vital year in the growth of the medium, with many talks making reference to the looming hardware generation changeover, and the changing creative approach as they move from developing for the established platforms to harnessing the capabilities of new ones. It will be fascinating to observe how this conversation changes at the D.I.C.E. Summit in 2014, once the carefully kept hardware secrets are spilled and discussion of What’s Next can begin in earnest.

In the coming days, we’ll be sharing a series of interview features that aim to give a sense of how the talk on the ground at D.I.C.E. unfolds. We spoke with a number of significant contributor at this year’s event, including Gearbox Software’s Randy Pitchford, Syfy’s Mark Stern, Supergiant’s Amir Rao, and the powerhouse 343 Industries duo, Kiki Wolfkill and Frank O’Connor. We also had the rare opportunity to chat with Infocom founder Dave Lebling, now a casual gamer with a love for World of Warcraft, and get his perspective on how the industry he helped set the foundation for has changed over the years.

D.I.C.E. is a special thing. Those in attendance should feel very fortunate to have had the opportunity to witness it for themselves firsthand. Attendees from their tumble through gaming’s looking glass with new perspectives on the craft of game development and the ideas that drive the people who build our most beloved interactive experiences.

The Last of Us Part II dominates this year’s D.I.C.E. Awards nominations