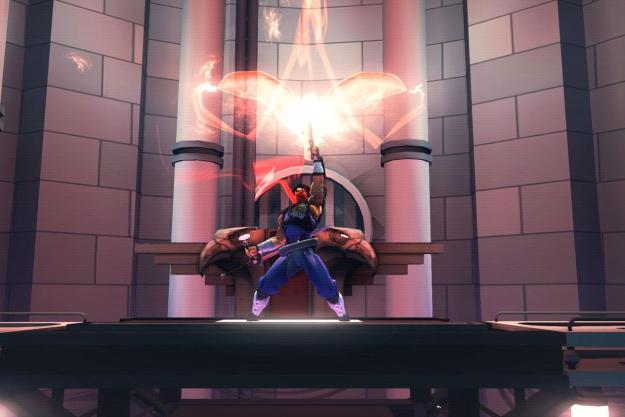 “Double Helix turns in the best playing Strider ever made, but its game lacks the vital visual panache of its predecessors.”

Strider feels right. Every swing of the sweet plasma sword – cypher, to use the game’s parlance – is instant and electric in Double Helix’s new game. Every double jump, every slide kick through a boss, every slow vertical climb up the silvery Sci-Fi-Renaissance-Russian architecture; Strider feels just right.

No small feat. Making a video game character move with delicious tactility is hard on its own, and even harder when dealing with a character like Strider Hiryu. There’s no standard for how Capcom’s red-scarfed assassin should move. Does he have ponderous weight, jumping in slow arcs like in the original ’80s arcade game? Stiff and stubby like on the NES? Swift and brutal like in Marvel vs. Capcom 2? Crazy fast and wall-clingy like in PSone’s Strider 2?

Every swing of the sweet plasma sword is instant and electric in Double Helix’s new game.

The character is iconic but difficult to pin down in a singular way, popping up sporadically across three decades of gaming. Double Helix and Capcom aren’t really resurrecting a series in Strider so much as they’re trying to define one. They come close, very close, thanks to how good this game feels to play, but it isn’t quite definitive. Strider is an excellent game but one that sacrifices the crucial idiosyncrasies that made Hiryu’s scant appearances back in the day so memorable.

For anyone worried that they’ll have to go back and find a Putt Putt Golf with a working Strider cabinet to catch up on the story, fear not. Double Helix’s game is, at heart, a retelling of the original game and its NES counterpart. Hiryu is the baddest-ass assassin amongst the Striders, and he’s been sent into Kazakh City to take out Grandmaster Meio, a shadowy dictator doing his best Emperor Palpatine impression.

That’s pretty much it. Past villains like Solo, a jetpack-sporting bounty hunter, and The Three Winds, kung fu triplets rocking some Pai (from Virtua Fighter) style are back, alongside some new bad guys like a tank-driving general. These foes mug and monologue at the screen for a few seconds before and after fights, and even make some vague threats while you explore the metropolis, but that’s it for story. Strider is far more concerned with letting you jump around and slice up robots than delving into what makes this world tick.

That’s just fine when the leaping and slicing is so very succulent. Hiryu is greasy fast and eminently controllable, flying down the cramped hallways and across big open rooms throughout Kazakh City. No version of the character has played this well. At the beginning you can only jump a single time and swing his signature sword, but each goal leading you through the game’s substantial, interconnected world typically ends in a new skill. Eventually Hiryu can double jump, slide kick, dive bomb, air dash, and throw kunai knives, as well as call in robot helpers called Options. New plasma upgrades also change attack effects; orange plasma gives the cypher a fire effect and makes kunai explosive, for example. Plasmas are essential for defeating different enemy types later on.

As in games like Metroid, almost all of these skills also change the way you navigate through the world. There’s no sneaking in air ducts – even in the sci-fi world of Kazakh City, there are copious air vents – without the slide kick, no getting through the glowing bubble doors and boost rings hanging in midair without the air dash. One of the most impressive things about Strider is how well Double Helix has integrated each upgrade into combat, navigation, and unlocking new areas of the map. None of these feel like just a glorified key; they’re equally useful in jumping over traps like lava pits and taking out rooms crowded with turrets, foot soldiers, and burly tank enemies.

While the architecture and overall design of Kazakh City is sound, it’s also an inescapably sterile video game world.

It’s edifying to explore the nooks and crannies of the map, finding upgrades tucked away in the corners and getting into fights. Each new area, like the underground black market, the lava-ringed temple, or the military base is laid out well and full of fun things to cut up. The enemies are also appropriately mean. The acrobatics necessary to take out the flying gun bots, wall turrets, snipers, and shield-toting toughs that need to be taken out with a plasma-specific charged hit are tricky, but rewarding. Those big pockets of enemies are common in most rooms too, but they’re balanced with quieter areas where you can collect yourself and explore.

While the architecture and overall design of Kazakh City is sound, it’s also an inescapably sterile video game world. Environments and enemies serve their functions well, but they’re just so boring to look at. This isn’t about wanting nicer graphics. Strider, beyond the main character himself, is just devoid of visual personality. Every area is a muted and dull, every surface some variation of shiny and metallic. The enemies are a legion of generic red or grey robots. Even the soundtrack, with remixed classics of the old tunes, is a dulled version of its former self.

The original Strider games, especially the arcade game and Strider 2, were weird as hell. The first level of the first game ended with the Soviet Parliament jumping into the air and turning into a dragon centipede. Strider Hiryu had to fight an enormous Robo-Ape and then an army of ladies in loincloths back to back. Get to the front door of a base in Strider 2, and suddenly you’re facing a woolly mammoth with a metal butt. Levels shifted from neon cities to wintry mountains and jungles willy-nilly. Chaotic visual panache and strange enemies were the only connective tissue blending the Strider games together, in addition to its cypher-wielding lead character in blue pajamas and a red scarf.

The cypher, pajamas, and scarf remain but the rest has been jettisoned. Now that Amazon has acquired Double Helix, it’s doubtful that they’ll have another shot at the series. This is an absolute shame. By any standard, Strider is an excellent game and arguably the best one that Double Helix has ever made (Ed. note: Silent Hill: Homecoming was the bomb, yo) but it’s missing vital personality. Worth playing? Unquestionably; Strider feels too good not to play. But without that sense of weirdness, that flair of visual creativity, it isn’t essential.

This game was reviewed on a PlayStation 4 using a code supplied by Capcom.