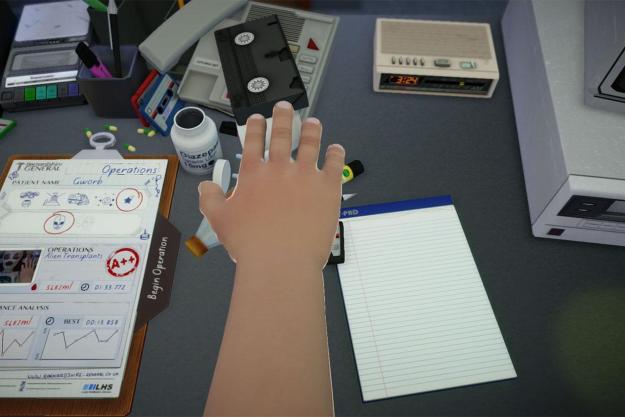 “Surgeon Simulator Anniversary Edition finds fun in frustration by laying out vague goals that can only be completed by mastering awkward controls.”

The sound of failure. Milton Bradley’s classic board game, Operation, juddered and shouted at you in machine language whenever you failed to remove a plastic body part precisely enough. Just the faintest whisper of tweezers against a metal cutout triggered spasms in the game board that were meant to shatter concentration and jar players on a visceral level.

Bossa Studios effectively recreates this same sensation in Surgeon Simulator Anniversary Edition for PlayStation 4. Jam on the wrong body part with a scalpel, or bone saw, or forceps, or laser, or plastic spoon (no, really) and you’ll see shades of red wash immediately across the screen as blood flows freely from a newly opened wound. Blood loss is your enemy here, a gradual ticking clock that replaces the insta-fail approach taken by Operation, but that simply serves to draw out the experience, and the stress it’s meant to induce.

Blood loss is your enemy here, a gradual ticking clock that draws out the experience, and the stress it’s meant to induce.

Surgeon Simulator‘s underlining design philosophy is straightforward enough: Present players with a challenging puzzle to solve, but don’t provide any instructions and make the controls as awkward to manage as possible. Context is what matters here. The puzzle in question is an anesthetized human being and the instructions that you’re lacking obfuscate the daunting goal of successfully pulling off a heart, kidney, eye, brain, or tooth transplant.

The controls just complicate everything. Your DualShock 4 controller becomes a marionette’s string, attached to a lone disembodied arm and hand (right or left, player’s choice), viewed from above. The left stick moves the arm around along two-dimensional X and Y axes and holding down LT lowers the arm from its natural resting position. The R1 button closes the thumb and forefinger into a pincer-like grip and the R2 curls the rest of the hand’s fingers. To put it more simply, you use R1 to pick up small objects, like scalpels, and hold R1/R2 together to grab and yank on larger objects.

To rotate the arm and bend the hand at the wrist, you use either the right stick or the DualShock 4’s built-in motion sensors. The former is undeniably “easier” (a relative term in a game like this), but motion controls create a much stronger sense of presence in the virtual operating room. When they work, that is. Unfortunately, the controller’s motion sensors have a tendency to lose calibration, particularly during more complex tasks.

There’s nothing more infuriating than twisting the DualShock 4 around just so as you position yourself to cut through a sensitive area, only to have the hand suddenly flip upside down without warning and ruin everything. In a game that’s intentionally designed to frustrate, mechanical failures such as this disrupt the careful balance between steep challenge and awkward hilarity. If you’re going to screw up royally and accidentally lose a scalpel somewhere inside the patient’s intestines, it should at least be your fault.

The real thrill of Surgeon Simulator comes from the playful experimentation of figuring out how to get the job done. The game’s first operation – a heart transplant, naturally – presents you with an open chest cavity. There’s a ribcage and a big pile of internal organs separating you from the heart, and two tables filled with instruments for you to pick up and prod with. Is the hammer your best bet for removing the ribcage? The rotary saw?

Throw any notion you might have of coming into this game armed with “proper” medical science out the window. Surgeon Simulator doesn’t necessarily reward the player that shatters ribs into tiny fragments so they can be cleared out of the way… but it doesn’t penalize either. The vast network of veins, arteries, and muscles that make up the human body are a non-factor. Inserting a new heart? Just drop it into the emptied chest cavity. Seriously. Don’t worry about finesse. Just drop that sucker and it’s operation over, you win.

You’ve got to be open to finding entertainment in failure, because failure happens frequently.

The PS4 version of Surgeon Simulator pulls features from both the PC release and the mobile version that followed it. You get all of the operations featured in each, plus variants that task you with pulling off the same feats on a rolling gurney, in the back of an ambulance, and aboard a space station. These different environments unlock after you complete the initial set of standard operations, and each one introduces new challenges that complicate the procedures even further.

That’s not necessarily a good thing. The ambulance operations in particular can be infuriatingly random in the way failure can strike. Much like the frustration over wonky motion control calibration, it’s hard to contain your rage when you make it to the end of a heart transplant only to watch as a sudden bump in the road sends your lone replacement heart sailing out the back of the speeding emergency vehicle. It’s equally possible to accidentally drop the heart and lose it in an unreachable location, but – again – at least in that case, there’s consolation in the knowledge that it was your own dumb fault.

That balance is where the make-or-break fault line in Surgeon Simulator lies. This game isn’t for everyone. The awkward controls and vague instructions don’t exactly scream “user-friendly.” You’ve got to be open to finding entertainment in failure, because failure happens frequently. As thrilling as it is to finally plunk a replacement organ down where it’s supposed to go, the journey is what really matters. And when that BZZZZZZZZT finally echoes in your ears, you’ve got to be game to try, try, try, and fail again, laughing all the while.

This game was reviewed on a PlayStation 4 using a code provided by the developer.

Make the jump to PlayStation 4 with the Limited Edition Batman: Arkham Knight Bundle

How to watch the Aston Villa vs Burnley live stream today