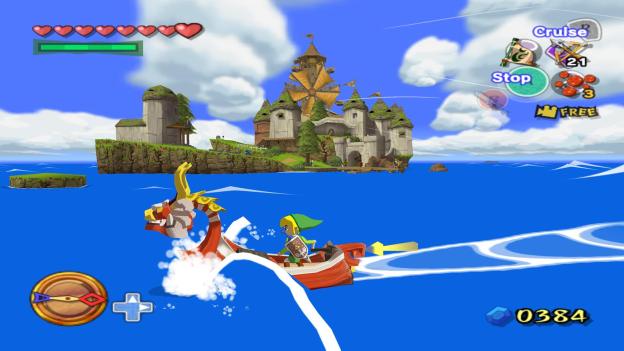 I generally stay away from personal narratives when it comes to game previews, but The Legend of Zelda: The Wind Waker remake merits an exception. The Legend of Zelda titles are games that have a sense of innocence and joy. They often depict violence, but it is always portrayed like a fairy tale. Even while the stories are complex, the themes are simple and timeless.

When The Wind Waker was released in 2003 (in America; it hit Japan the year earlier), it came during a particularly rough patch in my life. The details don’t matter. It wasn’t a “eating from a trashcan” bad time, or anything like it. It was just a rough time, and The Wind Waker actually was a game that I needed. Call it the right game at the right time, but it mattered, and it stuck. It was soothing, peaceful. It calmed me and brought a smile to my face during a time when those pleasures were rare.

Because of that, the HD remake was one of the first playable titles I bee-lined for at Nintendo during E3. And while the nostalgia can never fully recreate the original experience, I’m happy to report that it holds up. And now, someone else having a crappy time can experience this Zelda classic for themselves, now with 60fps.

Cel-HD. When the game was originally released, it was met with a lot of skepticism. The cel-shaded graphics were derided as a departure for the series. The cartoony nature of the game rubbed some people the wrong way, and others saw it as a way to make the game more kid friendly at the cost of the aging fans of the series. They missed out.

The story takes place in a Hyrule covered in water, with only a few sections of land jutting out above the oceans. You can explore the entire world. There are secrets to be found, and a land to discover. It is charming and has a childlike innocence, but also plenty of twists. The cel-shading adds a humor throughout, and Link is endearing. It was a great game when released, and a great game today.

GameCube meet GamePad. The original controller was unique, but it doesn’t take much to map it to the GamePad. All the buttons are there, and the touchscreen adds a new layer to it. With the touch capabilities, you can now drag items from your inventory to the buttons displayed. Once you enter for the button you want, it is mapped to that button. It makes it easy to switch things on the fly, and creates plenty of opportunities. The game was originally designed without it, though, so it just adds to the gameplay, although more as a convenience than a necessity.

You can also use the GamePad to physically move in order to move the camera. The touchscreen also changes the way you conduct music, an important feature in the game. The sailing has also been improved to make travel faster as well. It’s all little things, but it is an improvement.

The Legend of Graphics. The presentation is what the remake is all about. The cel-shading actually holds up fairly well, since it was based on art design instead of powerful graphics. The remake just makes things look crisper. The rough edges are gone, and the 60fps make the game move with more confidence.

It may not be enough to win people over that disliked the original, but it may make the game more palatable to people that skipped it but are looking for a Wii U game to try out. In fact, with the anemic Wii U library, this game skyrockets to the top of the list of best Wii U games.

If you missed it the first time, or if you have the time to replay the fairly lengthy game, then the HD remake of The Legend of Zelda: The Wind Waker is easily among the best games available for the Wii U. And if you are having a rough time, it will be there for you , just like it was for me.

The Legend of Zelda: Tears of the Kingdom (AKA Breath of the Wild 2) has a release date
Fire Emblem Engage is coming in January and bringing back Marth
Everything announced at the September 2022 Nintendo Direct
Our 5 biggest predictions for the September Nintendo Direct: Metroid, Zelda, and more
How to evolve Pawmo into Pawmot in Pokémon Scarlet and Violet
Live now: Save $50 on the Microsoft Xbox Series S Digital Edition deal
‘Wordle’ today, November 24: Answer, hints, and help for word of the day (#523)
7 video game characters who deserve a Macy’s Thanksgiving Day Parade balloon
The best multiplayer games on Nintendo Switch
The best PS5 headsets
The best Xbox Series X headsets
Save $250 on the Razer Iskur X XL gaming chair for Black Friday
This PS5 controller Black Friday deal drops the price by $20