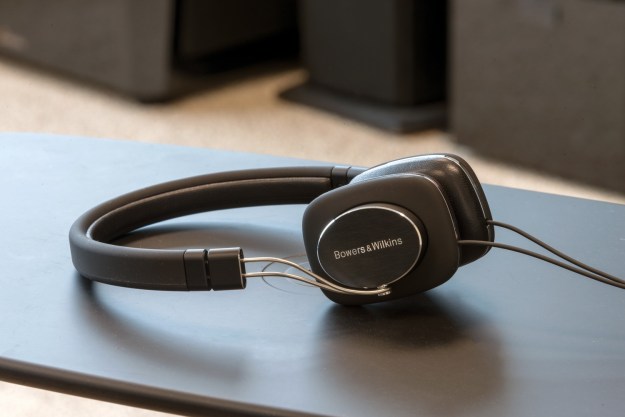 With a beautiful on-ear design and crisp, clear sound quality, Bowers & Wilkins’ first generation P3 headphones captured our hearts when we first heard them four years ago. We’ve long praised the company’s smallest headphone option for their clean treble response and lightweight comfort, well worth their $200 price tag. Naturally, we were excited for the newly-updated P3 Series 2, which are not only $50 cheaper than the original, but billed to improve upon the first P3 in both sound quality and comfort.

Not every upgrade is an improvement. After extended listening at the office, at home, and during our daily commutes, we’ve fallen out of love. Sure, the latest P3 are certainly cheaper and prettier than the first generation, but in this case we’d prefer B&W had left well enough alone.

As is typical of Bowers & Wilkins’ products, unboxing the new P3 Series 2 is a spectacular experience. The cans come in a beautiful white box with an upper shell that opens to reveal a thick, black hard case surrounded by form-fitting foam.

Inside the case lie the headphones, perfectly nestled with their iOS-compatible cable like the yolk of some fine, rare egg. Just like the previous model, they bring with them the sort of new-car smell you expect in only the finest European vehicles. Removing the hard case from the foam enclosure reveals hidden instruction booklets and warranty information underneath.

This out-of-box experience is as near-perfect as any first interface with a product gets, and easily among the classiest we’ve ever seen for $150 headphones.

The folks at Bowers & Wilkins have ditched the first generation’s acoustic cloth coverings on the removable magnetic earpads and upper headband, adopting the same leather that appears on their higher-end models. Other than that, the rest of the original P3’s appearance is undisturbed for the 2.0 version.

As far as design is concerned, the lack of change is appreciated; The P3, with its black aluminum shell and sleek, curving metal sliders has been and remains among the most beautiful headphones created.

The build quality of the headphones is remarkable at any price point, but especially now that it comes $50 cheaper than before. All the materials are sturdy and high-end, and form continues to follow function. They still fold easily (but not too easily) to fit back into their carrying case, and the top of the headband remains a rubberized plastic for easy removal and adjustment.

If anything, the firm clamp of the P3’s first generation is tighter on the new model, creating a somewhat uncomfortable set of headphones for long-term wear for those with larger heads or glasses, but snugly fitting those with smaller heads.

The P3 remain among the most beautiful headphones ever created.

The clamping issues aren’t aided by the change from soft acoustic cloth to leather coverings. While the leather is a nice aesthetic upgrade, without the addition of more earcup padding, it certainly isn’t as easy on the ears as the previous gen’s cloth was.

In fact, the cloth-to-leather change is also noticeable on the underside of the headband, with the lack of padding becoming particularly bothersome after a few hours of listening. The comfort issues are exacerbated on those with big heads, but everyone who wore this set of headphones in our office thought the clamping of the P3 Series 2 to be aggressive.

The feel of the Series 2 improves if one lengthens the headphones and attempts to float the headband as far above their head as possible, but the clamping force — which hits the bottom of the ear with the most pressure — feels a bit lopsided when doing so.

The new P3 sports the same set of 30mm drivers as the previous generation did, but they have been newly voiced to deliver crisper highs and deeper lows, according to the company. We did note the upper end of the sonic register to have an improved brilliance (an area of the sound which we already enjoyed on the original), but the upper-middle section of the sound remains unchanged. Sound isolation is the same as the original, and with just a thin layer of foam between your ears and the surrounding sound, does leaves a little to be desired, though about par for the course for a smaller on-ear.

In terms of bass, the Series 2 takes what we previously thought to be an over-the-top mid-bass hump and exaggerates it even further, creating an at-times muddy musical atmosphere from the low end. That, coupled with the lack of pronounced mids can create a lack of focus and clarity for some instruments, such as keyboards and rhythm guitars.

That said, the added bass can be a double-edged sword, especially for a compact on-ear like the P3.

It creates a pleasant depth on chronically bass-lacking jazz tracks like Thelonious Monk’s Round Midnight, but it gets in the way when listening to soul and hip-hop fare like Allen Toussaint’s Last Train or Kendrick Lamar’s untitled 05 — where the recordings’ bass lines absolutely overpower everything else in the mix.

Like the higher-end P5, the P3 Series 2 conforms to sonic norms heavily influenced by the Beats era . It provides certifiably dramatic low end in a small package, designed to accentuate the sub-bass of electronic and trap music, but strips away some of the clarity in the middle of the sound that we desire in other genres.

The Bowers & Wilkins P3 Series 2 is an incredibly beautiful, well-built, and well-priced set of headphones that looks even cleaner than its predecessor. But despite the aesthetic upgrade from the previous generation, the fit and sound leave something to be desired, especially considering how much we enjoyed the previous version.

There are a huge number of headphones occupying the $100-200 on-ear section of the market right now, and many of them are excellent in both sound and build quality. Those looking at the P3 will likely be considering the Sennheiser Momentum, Plantronics Backbeat Sense, and Thinksound On2.

Given their solid components, replaceable cables, and standard-issue hard case, we have no reason to believe the Bowers & Wilkins P3 Series 2 won’t last many years in standard-use scenarios.

No. With so many more comfortable, better-sounding alternatives at this price point, it’s hard for us to recommend the second generation P3 to anyone other than the group basing their purchasing decisions on style alone.