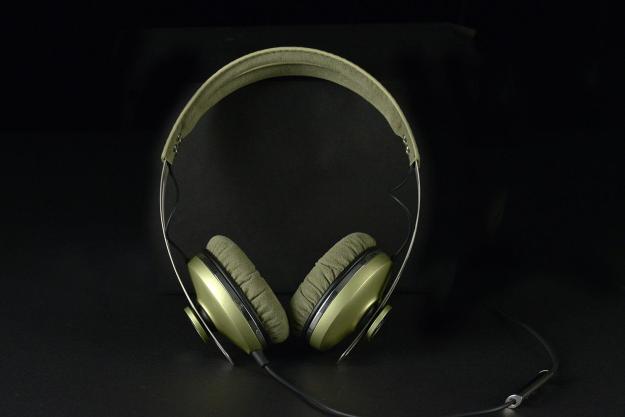 “Like a great band, sometimes a pair of headphones hits all the right notes; and that’s the Momentum.”

Nobody could accuse Sennheiser of jumping on the headphone bandwagon. The company has been neck-deep in the game since long before it was fashionable, and you’ll find models plucked from its massive armory almost everywhere, from professional studios to call centers.

Even if you have to stretch your original budget a tad, Sennheiser’s Momentum are worth every penny.

With its latest series, the Momentum, Sennheiser has taken its storied sonic abilities to the streets, offering style-hungry consumers a refined, semi-classical design with a touch of flash. We took a look at the Momentum over-ear last June, and really enjoyed the look and sound of the sleek cans. Though at $350 they’re a far cry from Sennheiser’s top-priced models, they’re still a bit out of reach for the average listener.

That’s where the Momentum on-ear comes in. Channeling the basic design traits of its over-ear sibling into a tighter and lighter package, the Momentum on-ear can be had at the more accessible price of $230 while still promising high-quality sound. How does this more affordable model represent the Sennheiser family crest? Read on to find out.

Sennheiser is known for including lots of little extras in its packaging, and though the Momentum on-ear is a few steps down the ladder, they still offer a satisfying unboxing experience. Removing the top lid revealed a black suede case in the shape of a horseshoe, with white stitching around the borders, and dual zippers. Inside the case was another layer in the form of a vinyl bag, with the headphones concealed inside.

We pulled open the bag to find the moss-green headset within, its metallic shell earpieces attached to a thin steel frame, with more suede covering over the ear pads and headband. The polished metal caps on the outside of the earpieces glittered in the light, and the brushed metal rivets that secured the lining to the frame gave an impression of quality artisanship. In a webbed pocket on the interior of the case we dug out two removable headphone cables, including one with a three-button iOS inline microphone (mic).

The Momentum’s style is retro-modern, with a touch of the kind of design you’d see on headsets worn by radio operators in the 40’s and 50’s. The headphones fit together well, and like all good design, it uses elementary methods wherever possible to accomplish its aims. With that said, some may find the Momentum exude a sort of toy-ish quality; perhaps because they look like the mini-me version of the more substantial over-ear Momentum.

The Momentum’s style is retro-modern, with a touch of the kind of design you’d see on headsets worn by radio operators in the 40’s and 50’s.

The slim steel band is cut with long oval slots, the lower of which support the earpieces, held in place by riveted caps.

The caps press against the band with tight rubber pads, allowing just enough play to smoothly adjust the ear cups vertically, while also giving some leeway horizontally for a tailored fit.

Accents of polished steel are dappled along the frame, with a holographic ‘S’ cut into the exterior caps for some extra flash. The padding on the earpieces and across the upper band is lined with plush artificial suede that feels extremely soft to the touch. Resting behind grey mesh screens at the center of the ear pads are the small dynamic drivers, which offer an impressive claimed frequency range of 16-22,000Hz.

The removable cables connect at a 3.5mm input at the base of the left earpiece. The cables are all black, and run 1.4 meters in length, with a 3-button, silver inline mic about a foot down along one of them. Both cables are terminated with a 90-degree angled jack, which is capped by another beaded Sennheiser ‘S’ in holographic coloring.

On our first night of testing, we wore the Momentum for nearly three hours with very little discomfort to show for it. The headset is light and soft, and the earpieces are extremely comfy as they make contact, with more than enough cushion to compensate for the thin, harder layer of padding on the band.

The Momentum pull no punches. What you put into them is what you get out. Our low-quality, lossy files sounded just as they should: dirty, warbled, and thin. And our high-grade transfers of well-produced tracks sounded detailed, clear, and gorgeous. The headset’s transparent sound signature showed a nimble ability to lean into every track we played.

Whether it was the golden warmth of tape-saturated jazz, or the cold synthetic precision of EDM, the Momentum seemed to dig up whatever was in the track, carving out a rich, accurate portrait of the sound.

The Momentum pull no punches. What you put into them is what you get out.

Two words that came up repeatedly during our evaluation were ‘space’ and ‘accuracy.’ The Momentum had a way of exposing the subtler details in music by separating each instrument with clean precision, allowing for distinct textures to be explored in finely delineated layers of sound. The effect created an extremely musical and engaging listening environment, all the more impressive from a Supra-aural (on-ear) design.

One of our favorite examples came from the Keane album Hopes and Fears. We began listening to the title track, “Everybody’s Changing,” and before we knew it we’d blown through the whole album. The headset spun the vast rolls of synth pads and effects in a three-dimensional landscape, allowing us to examine each sound closely. Several times we heard moving synth pads layered on top of each other that we’d been unable to differentiate in previous listens. The well-sculpted effects were cast through the space in precise, elliptical movements that we followed with fixed concentration.

What really impressed us, though, was the Momentum’s chameleonic ability to move through other genres with that same deft precision and engagement. Led Zeppelin’s Physical Graffiti was rather thin on the details at first, blanketed in a cloudy haze of tape hiss. But as we moved in closer, we heard excellent dimension in the drum tracks, and the scratchy distortion of the double tracked electric guitars at the sides burned with tubular color. Similarly, Paul’s bass lines from Abbey Road were rich and velvety, presented with firm warmth, while Ringo’s snare and toms cut through with thick, pulpy resonance. The floor tom toward the end seemed to thump with living presence.

Moving through our catalog, the theme continued. Peter Tosh’s “Downpresser Man” again reminded us of the excellent spacing as we virtually wandered through the vast collection of percussion tracks, keyboards, and vocals, exploring each different timbre and color at our leisure. And when we pushed the headset in the low end with hip hop and dance music, it responded with firm, punctual power that had plenty of kick, especially for a smaller driver set. Aside from our low bitrate MP3s, there really was no music we tested that didn’t offer its own contribution of texture and detail to the session.

Like a great band, sometimes a pair of headphones hits all the right notes; and that’s the Momentum. Combining style, comfort, and sonic brilliance, Sennheiser’s Momentum on-ear had us rushing the stage for more. We realize $230 is a lot of money for an on-ear headphone, and $70 more can get you into a few more capable over-ear models. But we count these as one of the best headphones we’ve heard in their class, and their performance exceeds many we’ve heard at the next tier. Even if you have to stretch your original budget a tad, Sennheiser’s Momentum are worth every penny.