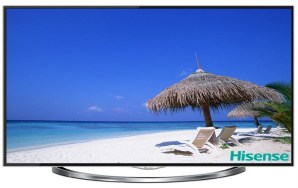 Hisense has some sizable aspirations for the future. The Chinese technology company has been growing steadily for the past few years in the United States, and claims to be the number 1 provider of flat panel TVs in China for 9 straight years. Today at Hisense’s CES 2013 press conference, we got a chance to check out its newest 4K 3D Smart HDTV, the 65-inch XT880. While the TV certainly looked incredibly beautiful, it was slightly less impressive than some of the other offerings we’ve seen in the Ultra-high definition category at CES so far. However, knowing Hisense, we’re also guessing it just might be the most affordable, too. Highsense also released details on some interesting new  TVs in the works, including the 4K XT900 – which is loaded with features and comes in a whopping 110-inch screen size. Other models include a glasses-free 3D TV, and a transparent 3D TV. Frankly, we’re not even sure what that last one means.

Aside from its tantalizing new Ultra HD and 3D TVs, Hisense also revealed an impressive array of Google-ready HDTV’s set to be released soon under nine different model numbers. The TVs come in sizes ranging from 32 inches to the gargantuan 110 inches of its flagship XT900 we mentioned earlier. Most of the new models incorporate smart TV and Google technology, and many of the new sets promise to be offered at pricing that is much more affordable then Hisense’s competitors. Unfortunately, Hisense did not disclose pricing or release dates for any of its new models this afternoon.

Both the XT880, and the XT900 110-inch TV will be shown at the Hisense booth when CES hits full force tomorrow, so we’ll take a closer look. We’re also hoping to get a glimpse at some of the company’s other concept TVs. We’ll let you know more details about pricing, release dates, and what exactly 3D transparency is as soon as we can. For now, we’ll let you ponder the possibility of these wild new prototypes, as well as a 4K TV you might actually be able to afford.

The best TVs of 2022: our favorites from Samsung, LG, Sony, and more
These giant TVs are all under $300 during this Walmart TV sale
Marantz’s new Cinema series AV receivers are a stylish way to go 8K
The best 4K TVs for under $500: premium picture on a budget
2022’s best TVs for under $1,000
Amazon saw 15.3 million watch Thursday Night Football on Prime Video
How to watch Pittsburgh Steelers vs. Cleveland Browns on Thursday Night Football
The best wireless earbuds for 2022
Thursday Night Football stream struggles continue for Prime Video
The best Roku TVs of 2022: which should you buy?
The best speakers for 2022: great hi-fi options for music and more
Nothing teases its next wireless earbuds with photos of a lipstick-like case
Best new movies to stream on Netflix, Hulu, Prime, HBO, and more