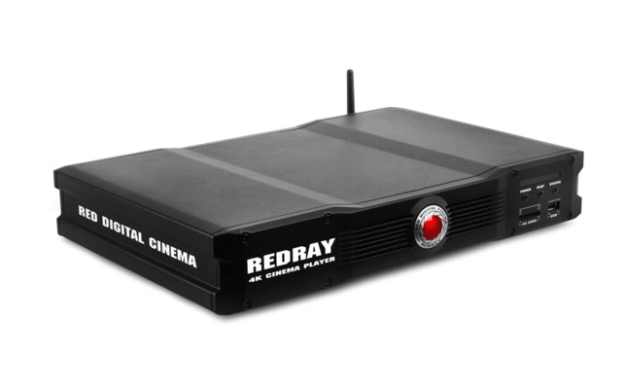 4K/Ultra HD may have been all the rage at CES 2013, but with little or no content to watch at home, consumers were given little incentive to run out and order a twenty-thousand dollar HDTV to replace the 1080p model sitting in their living rooms. Even with the recent announcement by the Blu-Ray Association that they were forming a task force to investigate the feasibility of putting 4K films on Blu-ray, home theater fans still don’t have a player; aside from the unit announced by Sony that comes with their 84” Ultra HD set.

If Red does not jump off the page and scream at you as a brand you may have seen at Best Buy, you are not alone. If you have marveled at the cinematography from the Hobbit, Total Recall, or The Amazing Spider-Man, then you are more than familiar with the capabilities of their cameras. Move over Blu-ray. Your replacement has arrived via Red’s RedRay 4K streaming player which is available now for pre-order. How much? A measly $1,499. The Oppo BDP-105 just became a bargain.

The RedRay player is capable of streaming Ultra HD content into your home via the internet and can also play back HD and 3D content as well at 48 to 60fps which will please Peter Jackson and James Cameron no end. The RedRay also comes with a 1TB internal hard drive that can be expanded so that you can save content. The player also comes with 1 HDMI 1.4 output, 3 HDMI 1.3 outputs, and an additional HDMI output for 7.1 surround sound.

The player utilizes Red’s .RED format and connects to Odemax’s cloud-based content delivery system, which is where users will find all of their 4K content. The RedRay player can also be connected to solid state media via its networking capabilities which will be a relief to users who want to store their film libraries on an external drive.

The one major fly in the ointment is that the player can’t play any of your existing films unless you rip them to an external hard drive. There is also little point to buying one until you have a 4K HDTV, as you will be unable to watch any 4K content, but it is somewhat exciting to see that a major player on the production end is already showing support for the format.

Topics
Go big or go home: this 85-inch Samsung 4K TV is $300 off
Flash sale drops the price of this 55-inch QLED 4K TV to just $370
Best 75-inch TV deals: Get a large screen for the Super Bowl
Peacock does away with free tier for new subscribers
Best 65-inch TV deals: Save on QLED and OLED for Super Bowl
A rare Disney Plus deal just started — get it while you can
LG brings Apple TV, Apple Music, and AirPlay to webOS Hub-based TVs
This Super Bowl deal knocks $2500 off Samsung’s QN800B 8K TV
The best family movies on Netflix right now
The 50 best movies on Netflix right now (February 2023)
There’s a huge Sonos flash sale happening right now
The best movies on Amazon Prime Video (February 2023)
The best new shows to stream on Netflix, Hulu, HBO, and more